I Thought I Bought a Mini Pig—But 650 Pounds Later, I Realized I Was Wrong

Steve JenkinsUpdated: Jun. 05, 2017
From the book Esther The Wonder Pig

Steve Jenkins had owned many pets. But Esther the “mini pig” turned out to be a class—and a size— of her own. 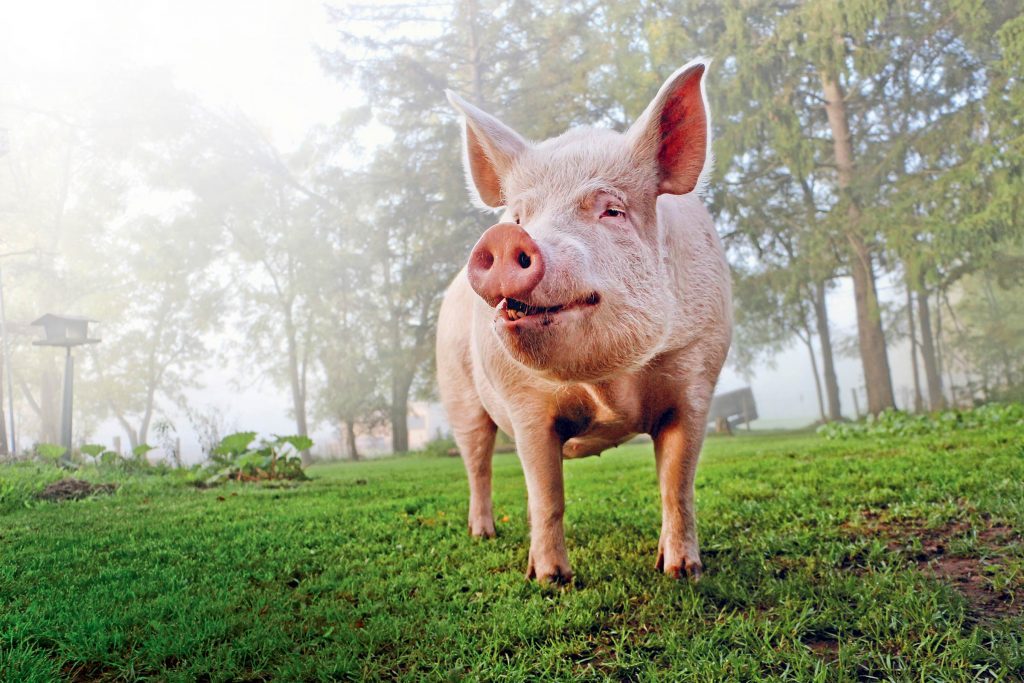 Courtesy Steve Jenkins and Derek WalterOne night about five years ago, I was on my laptop in the living room when I received a Facebook message from a woman I knew from middle school, someone I hadn’t spoken to in 15 years:

“Hey Steve,” she said. “I know you’ve always been a huge animal lover. I have a mini pig that is not getting along with my dogs. I’ve just had a baby and I can’t keep the pig.”

It’s true that I’ve always loved animals. My very first best friend was my childhood dog, Brandy, a shepherd mix, brown and black with floppy ears and a long, straight tail. So I was intrigued. A mini pig sounded adorable. In hindsight, of course, the whole situation was bizarre, but I’ve always been a trusting person.

I replied with a casual, “Let me do some research and I’ll get back to you,” but I knew I wanted the pig. I just had to figure out how to make it happen.

I lived in a three-bedroom single-level house in Georgetown, Ontario, a small community approximately 30 miles west of Toronto. It’s tricky enough bringing a pig back to the house you share with two dogs, two cats, your longtime partner, your two businesses, plus a roommate. But on top of that, only nine months earlier, I’d brought our cat Delores home without talking to Derek about it. He didn’t react well.

A few hours later, I got another message from the friend:

“Someone else is interested, so if you want her, great. If not, this other person will take her.” 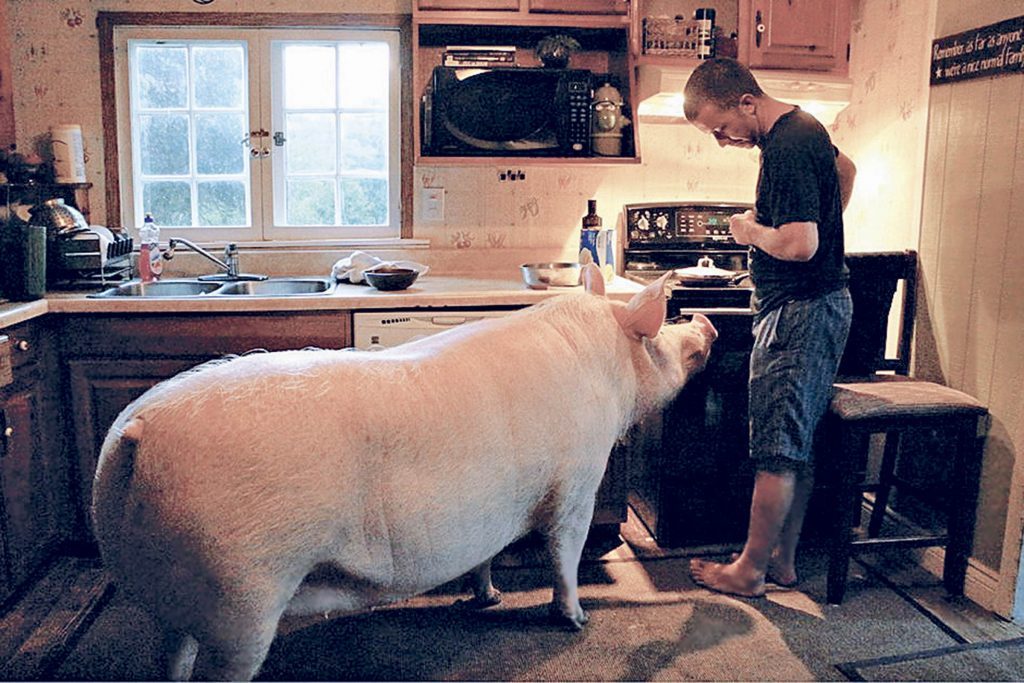 Courtesy Steve Jenkins and Derek WalterYou’re probably smart enough to recognize this as a manipulative tactic, and normally I’m smart enough too. But I was not letting that pig go. So I told my former classmate that I’d take the animal. I gave her my address, and we agreed to meet in the morning.

I knew nothing about mini pigs. I didn’t know what they ate; I had no idea how big they got. Once I started doing some Internet research, I found a few people claiming that “there’s no such thing as a mini pig,” but I was blinded by my sudden obsession and my faith in my onetime friend. She had said the pig was six months old and spayed and that she’d had her for a week, having gotten her from a breeder. It seemed this mini pig would grow to be about 70 pounds, maximum. That was pretty close to the size of Shelby, one of our dogs. That seemed reasonable.

[pullquote]”She was maybe eight inches from tip to tail, with chipped pink polish on her little hooves.”[/pullquote]

When we met the next day, I watched the woman handle the pig, and I could tell there was zero attachment.The pig was tiny, maybe eight inches from tip to tail. The poor thing had chipped pink nail polish on her little hooves and a tattered sequined cat collar around her neck.

She looked pathetic yet lovable. I’d met the pig 12 minutes ago, and I already knew she needed me. Ready to drive home with the newest member of our family, I had only a few hours to figure out what to tell Derek.

The pig sat in the front passenger seat, skittish and disoriented. I talked to her and petted her while we took back roads to our house and I planned my “please forgive me for getting a pig” dinner for Derek. (The likely menu: bacon cheeseburgers and homemade garlic fries.)

When we got home, the cats were their typical curious but uninterested selves when faced with the pig. The dogs are excitable around baby animals and children, so they whined and jumped. I held on to the pig securely and let them sniff her a little before I hid her in the office. I figured I’d better get Derek in a good mood before springing the new arrival on him.

When I led him to the office and revealed my surprise, Derek stood in the doorway like a statue. Every emotion other than happiness flashed across his face. It didn’t take more than a half second for him to know what I had done and what I wished to do next.

He was furious. He ranted about how irresponsible I was. He insisted there was no more room in the house. The only positive thing I could say was, “She’s a mini pig! She’ll stay small!”

[pullquote]”He was furious. The only positive thing I could say was, “She’s a mini pig! She’ll stay small!”[/pullquote] 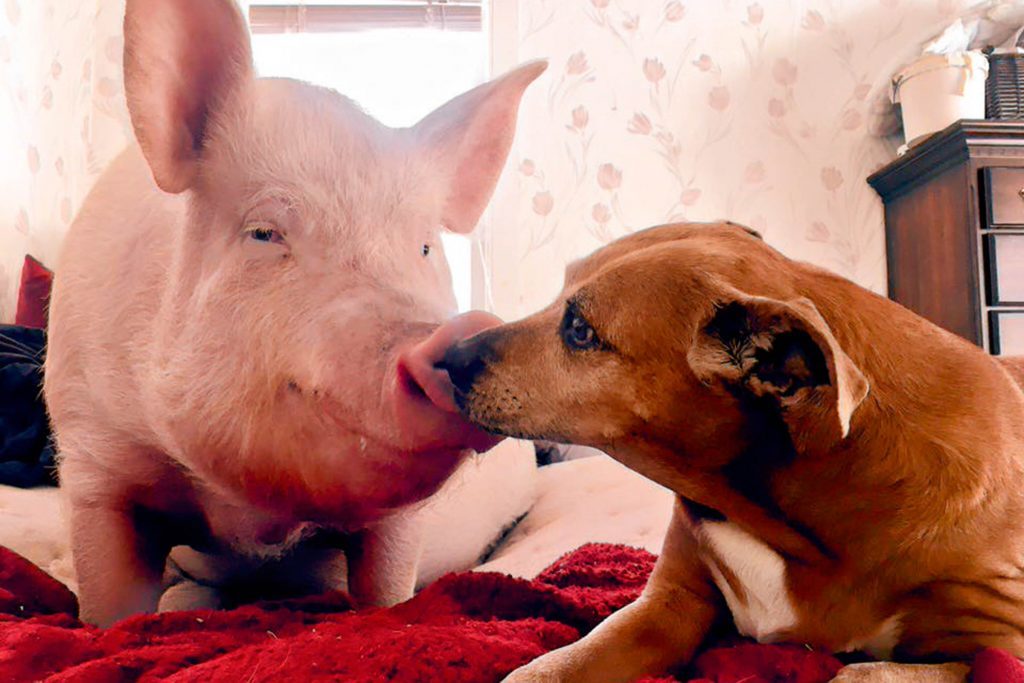 I knew that what I’d done was wrong, but I hoped I could smooth things over. Soon enough, the lovably adorable pig did the smoothing for me. One night we were having dinner, and Derek started talking about where the pig’s litter and pen would go. You don’t “build a pen” for someone you’re getting rid of. Within two weeks, we christened her. We wanted to evoke a wise old soul. “Esther” felt right.

As soon as the veterinarian saw Esther, he shot me a bemused look.

“What do you know about this pig?” he asked. I gave him the story, or at least the one I’d been told.

“I already see a problem. Look at her tail. It’s been docked,” he said.

“Exactly,” he said. “When you have a commercial pig—a full-size pig—the owners will generally have the pig’s tail cut back. This minimizes tail biting, which occurs when pigs are kept deprived in factory farm environments. If Esther really is six months old, she could be a runt. If that’s the case, when fully grown, she could be about 70 pounds.”

“But if she’s a commercial pig and not a runt­— Well, I guess we’ll cross that bridge when we get to it.”

The vet explained that the only way to know anything for sure would be to weigh and measure Esther and start a chart. Pigs have a very specific rate of growth. 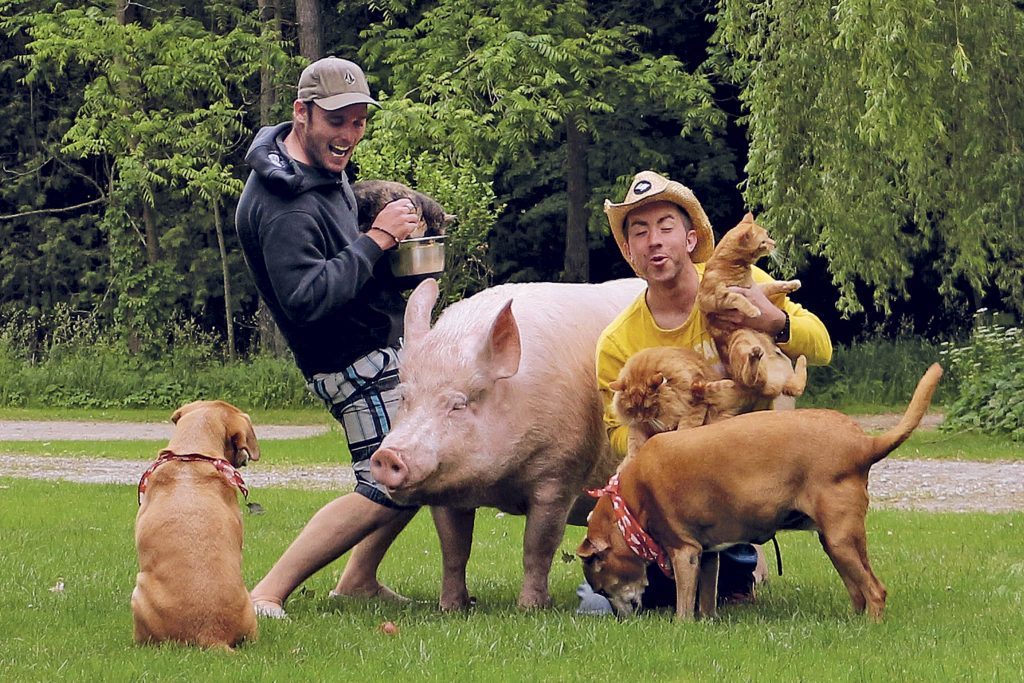 Courtesy Steve Jenkins and Derek WalterOn our next vet visit, a few months after we’d adopted Esther, I had to admit that she’d been growing quickly. Over that short time, she’d started closing in on 80 pounds. It was becoming clear that I’d probably adopted a commercial pig—and she was going to be enormous.

I hadn’t known I’d wanted a pig, but the joy I felt once I knew I would always be going home to her made me smile. Everything about Esther was precious: the way she shuffled around, the way her little hooves slid along the floor when she ran, the funny little clicking noise she made when she pranced. She’d also nuzzle our hands to soothe herself, licking our palms and rubbing her snout up and down on us as she fell asleep. And she stayed precious, even as she approached her full-grown weight of 650 pounds.

Now, I admit there’s nothing all that peaceful about being startled awake at 3 a.m. by a 650-pound pig barreling down a hallway toward your bedroom. It’s something you feel first: a vibration that rumbles through the mattress into your consciousness. You have only moments to realize what’s happening as you hear the sound of hooves racing across the hardwood, getting louder by the second.

Within moments, our darling pig, Esther, comes crashing into the room, most likely spooked by a noise. She launches onto our bed much the same way she launched into our lives. And while it might be a mad scramble to make space for her­—there are usually two humans, two dogs, and two cats asleep there­—it’s more than worth it for the excitement she has added to our world.

One thing I hadn’t expected was just how many behaviors Esther would share with the dogs. She’d play with a Kong toy as they would, shaking it back and forth. She’d want to chase the cats and cuddle when she was tired, climbing into our laps to ­nuzzle—even as she outgrew the dogs by 10, 20, 30 pounds and more.

And just like the dogs, she often wanted our attention. She started playing and doing hilarious and clever things on her own. (She can open the refrigerator!) So we treated her like one of the dogs. And that struck us to our cores.

What made pigs different? Why were they bred for food and held in captivity while dogs and cats were welcomed into our homes and treated like family? Why were pigs the unlucky ones? Why hadn’t we realized they had such engaging personalities and such intelligence? And where would Esther be now if she hadn’t joined us?

And so a few weeks after getting Esther, we realized we had to stop eating bacon. Shortly after that, with some difficulty, we cut out meat entirely. And a few months after that, dairy and eggs followed. We were officially vegan—or “Esther-approved,” as we like to call it.

In 2014, we moved a half-hour drive from Georgetown to Campbellville, Ontario. There, we founded a farm where we care for abandoned or abused farmed animals—so far, six rabbits, six goats, two sheep, ten pigs (not including Esther), one horse, one donkey, three cows, three chickens, and a peacock. Esther has changed our lives—that’s obvious. And now it’s our turn to try to change the world for other animals. The name of our farm? The Happily Ever Esther Sanctuary.

With Derek Walter and Caprice Crane

To read more about the Happily Ever Esther Sanctuary and Steve Jenkins’s and Derek Walter’s tales of life with Esther, go here.