This Girl’s Etch A Sketch Art Is Beyond Amazing 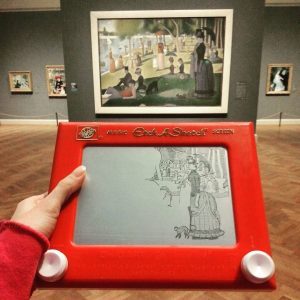 French painter Georges Seurat created his most famous work, A Sunday on La Grande Jatte, by applying millions of individual dots of paint to a 70-square-foot canvas over the course of two years. A few months ago, Chicago illustrator Jane Labowitch recreated the same scene using a single uninterrupted line on a classic nine-inch by nine-inch Etch A Sketch. It’s OK to be equally impressed by both.

Jane, 24, is better known as Princess Etch A Sketch online, where her original Etch A Sketch art has appeared on Reddit, CNN, MTV, Buzzfeed, and more. Using just her mastery of the classic two-knobbed sketching toy, Jane recreates old master paintings, epic architectural renderings, flawless snapshots from Disney and anime films, and custom hand-etched portraits for patrons around the world.

“I started playing with an Etch A Sketch when I was four,” Jane writes on Facebook. “Growing up I’d visit my grandma’s house on weekends. I played with my Etch A Sketch there because my grandma restricted my TV watching. In retrospect, I am really thankful… it was during those weekends of boredom that I began to hone my skill.” Now, after 20 years of practice (and a BFA in Illustration from the American Academy of Art), Jane’s learned to finesse those plastic knobs with the ease of holding a pen. She completed Seurat’s masterpiece, for example, in four sittings at the Art Institute of Chicago where the original work hangs. Total sketching time: eight hours. 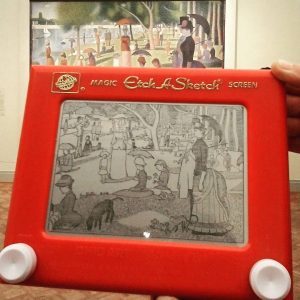 Jane tasted her first Internet notoriety on Reddit two years ago, when she shared this meticulous sketch of the United States on the Fourth of July: 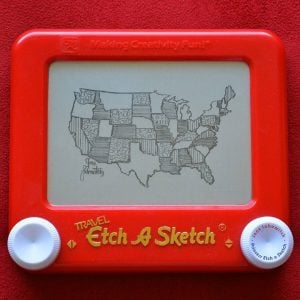 Since then, Jane’s Etch work has appeared on blogs far and wide, and in exhibitions around the world. While displaying some of her sketches at a Paris fashion show, Jane crafted this memento for herself: 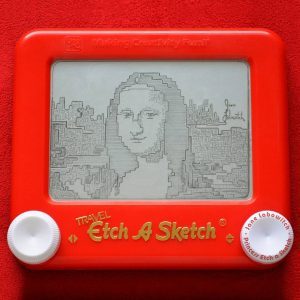 As with her Seurat, Jane sketches many of her works from personal observation. This rendering of Rodin’s Eve After The Fall, for example, was also sketched in person at the Chicago Institute of Art—this one completed in just 40 minutes on an Etch A Sketch mini. 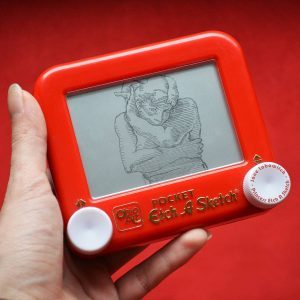 But for a truly mind-blowing look at what an Etch A Sketch can accomplish in the right hands, take a look at Jane’s architectural renderings. Here’s her take on St. Basil’s Cathedral in Moscow: 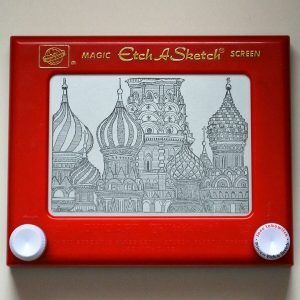 This exceptional canvas was recently selected for exhibition at Chicago’s Kohl Children’s Museum through September. How does Jane feel about this? 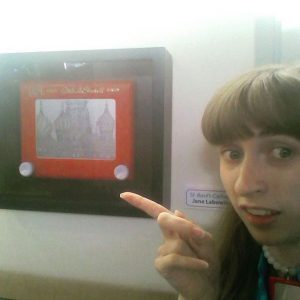 “Hey would you look at that,” she wrote on Instagram, “dreams do come true!”

Visit Jane’s Etsy shop here to check out her custom portraits, and follow her on Instagram here.