Everyday Heroes: “I Carried Him Down the Mountain”

How hiker Andi Davis saved the life of a 50-pound pit bull.

The trail through the Phoenix Mountains Preserve wasn’t usually so deserted. Even on her regular predawn trek, Andi Davis, 49, regularly crossed paths with a handful of other hikers. On this morning, however, she heard only coyotes howling among the cacti and spiky ocotillos.

A half mile in, where the trail sloped steeply, Andi used her hands to clamber up to the highest peak. When she finally reached the summit, she noticed a dark shape inches from her left foot. She startled, then stared. It’s a dog, she said to herself, and it’s dead. She took a moment to realize that the dog’s eyes were open. A thin, dirt-caked pit bull was looking at her.

Instantly, Andi was afraid. She was a sucker for strays; she, her husband, Jason, and their ten-year-old daughter, Jessica, had three at home. But ever since a pit bull had attacked her German shepherd when she was out walking him one day, she’d been wary of pit bulls. She murmured a greeting to show she was friendly. At the sound of her voice, the pit bull trembled violently.

[pullquote]Pity overwhelmed her, and she knew that if she didn’t carry the dog down the mountain, he would die.[/pullquote]

Andi inched closer and dripped some water into the dog’s mouth. He tried to stand up but then collapsed. Something was wrong with his left front leg. Andi pulled out her phone to contact her husband, but he didn’t respond. Pity overwhelmed her, and she knew that if she didn’t carry the dog down the mountain, he would die.

She carefully put her arms under the injured dog’s body. He was so weak, “he literally fell into my chest,” she says. 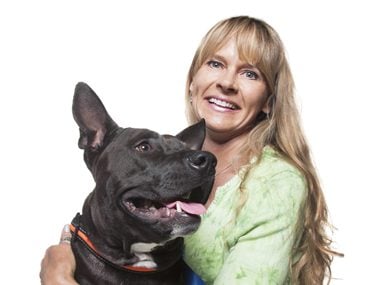 Staggering down the steep, rocky mountainside with the 50-pound animal in her arms, Andi repeated, “It’s OK. It’s OK,” more to soothe herself than the dog. Would she fall? Would he bite her? When her arms and back started aching, she refused to give in to the pain. The trip up had taken 30 minutes; going back down took twice that.

At home, Andi’s husband finally received her messages. He and Jessica jumped into the car and drove to the parking lot. Just as Jason was pulling up, Andi stumbled into the lot with the dog cradled in her arms. “He’s hurt!” Andi warned as her daughter leaped from the car. “Stay back, and be careful.” Jessica began to cry when she saw the dog’s injuries.

Then the pit bull lifted his head and tenderly licked Jessica’s cheek. Once in the backseat, he laid his head on Jessica’s lap, and she pulled the thorns from his matted coat on the way to the Arizona Humane Society.

Later that morning, an X-ray revealed that a bullet had landed in the dog’s shoulder and shattered the bone, but it was too close to surrounding blood vessels to be safely removed. There was a chance, too, that the dog would lose his damaged leg, though the vet thought it might heal on its own. (It did.)

A few days later, the Davises returned. Andi reports that “the first thing he did was give me a kiss, then go right to my daughter.” Any reservations Andi might have had evaporated right there. They named the dog Elijah and brought him home that day.

Since then, “he’s been perfect,” says Andi. He plays happily with the family’s Boston terrier and jumps into Jessica’s bed to snuggle every morning. Elijah’s calm, affectionate nature makes the wounding and abandonment on the mountain inexplicable. “He’s so sweet. Why would someone shoot him?” Andi asks.

The Davises realize they’ll never know. They’re just relieved the story has had a happy ending.

Says Jessica, “He was meant to be ours.” 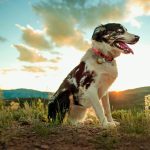 This Dog Fell Off an 800-Foot Cliff—Weeks Later, He Was Found Alive