We can all learn from these remarkable people who, after suffering devastating tragedies, were able to put aside their anger and blame to find mercy in their hearts.

Iranian woman Samereh Alinejad had told the The Associated Press that “retribution had been her only thought” after her teenage son was murdered. But in a dramatic turn at the gallows, literally moments before the killer was to be executed, Alinejad made a last-minute decision to pardon the man. She is now considered a hero.

In May 2014, New York Times photographer Peter Hiogo began a photo essay project in Rwanda to demonstrate the forgiveness between the Hutus and Tutsis—the two cultures involved in the 1994 Rwandan genocide that took millions of lives. In the photos, members from both cultures stand by side like Francine Mukagasana and Olivier Habyarimana here, illustrating a story of forgiveness and how the subjects’ lives are now thoroughly intertwined.

After a long shift at the fire department, Matt Swatzell fell asleep while driving and crashed into another vehicle, taking the life of pregnant mother June Fitzgerald and injuring her 19-month-old daughter. According to Today, Fitzgerald’s husband, a full-time pastor, asked for the man’s diminished sentence—and began meeting with Swatzell for coffee and conversation. Many years later, the two men remain close. “You forgive as you’ve been forgiven,” Fitzgerald told Today.

In an interview with Real Simple, domestic violence survivor Pascale Kavanagh said that she never thought she would reconnect with her mother—her abuser—during her adult life. However, in 2010, her mother suffered several strokes that left her unable to communicate or take care of herself. With no one else to help, Kavanagh began to sit by her mother’s bedside and read to her. Through this, Kavanagh says the hate she had for her mother dissipated into forgiveness and love.

According to People, teen Jordyn Howe took his stepfather’s gun to school and accidentally shot Ady Guzman-Jesus’s daughter, Lourdes, while showing the firearm to friends. Astonishing the judge and community, Guzman-Jesus not only forgave the boy but also asked for him to get a lighter sentence, telling reporters that she believes her daughter would have wanted it that way. Howe will only serve one year in a juvenile detention center, and will visit local schools with Guzman-Jesus to warn kids of the dangers of guns.

During a night swim with girlfriends, bride-to-be Rachelle Friedman was horsing around and got jokingly pushed into the shallow end of the pool, where her head hit the bottom. She cracked her neck, reported Today, and has not been able to feel anything below it since. Despite the life-changing injury, Friedman went on with her marriage and has said she never harbored resentment toward her friend about the freak accident. “There is no use in being down in the dumps and depressed. It’s not going to get you anywhere,” she told Today.

According to ABC News, Mary Hedges was at a mall with her son when two boys pushed a cart over a railing onto her, causing severe brain injury as well as blindness in one eye, and the amputation of her right foot. Even though she suffered a coma and spent weeks fighting for her life, Hedges was forgiving. “I wish them well, I do,” she told ABC News. “I feel very sorry for them. My son is 13 also, and he is a very good boy.”

Sandra Walker, a mother of two, lost her husband in a car accident that also caused her to have a life-changing brain injury, according to The Daily Mail. At the trial for the accident, in her court statement Walker said she sympathized with the woman who crashed into them—who herself lost a child in the accident—and gave her a hug. “I know she is going through as much pain as I am feeling. I wanted her to know that I forgive her for what she did,” Walker told WSB-TV.

According to an excerpt of the book Why Forgive? in Plough Quarterly, Steven McDonald was a young police officer in 1986 when he was shot by a teenager in New York’s Central Park, an incident that left him paralyzed. “I forgave [the shooter] because I believe the only thing worse than receiving a bullet in my spine would have been to nurture revenge in my heart,” McDonald wrote. While the younger man was serving his prison sentence, McDonald corresponded with him, hoping that one day the two could work together to demonstrate forgiveness and nonviolence. Unfortunately, the young man died in a motorcycle accident three days after his release; but McDonald still travels the country to deliver his message.

Mary Johnson lost her son in 1993 after a then-teenaged Oshea Israel got into a fight with him at a party, and shot him. With so much unanswered, Johnson went to visit Oshea in jail. After their first contact, “I began to feel this movement in my feet,” Johnson told The Daily Beast. “It moved up my legs, and it just moved up my body. When I felt it leave me, I instantly knew that all that anger and hatred and animosity I had in my heart for you for twelve years was over. I had totally forgiven you.” The two now live as neighbors in the same duplex, and Johnson has even referred to Israel as “son” in interviews. “I admire you for your being brave enough to offer forgiveness, and for being brave enough to take that step,” Israel told The Daily Beast. “It motivates me to make sure that I stay on the right path.” 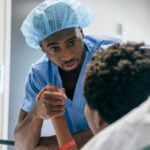