14 Years After a Fatal Diagnosis, This Man Ran His 18th Straight Marathon

After experiencing a slew of potentially deadly heart problems, Randy Lazer always had a new finish line in mind to motivate his recovery. 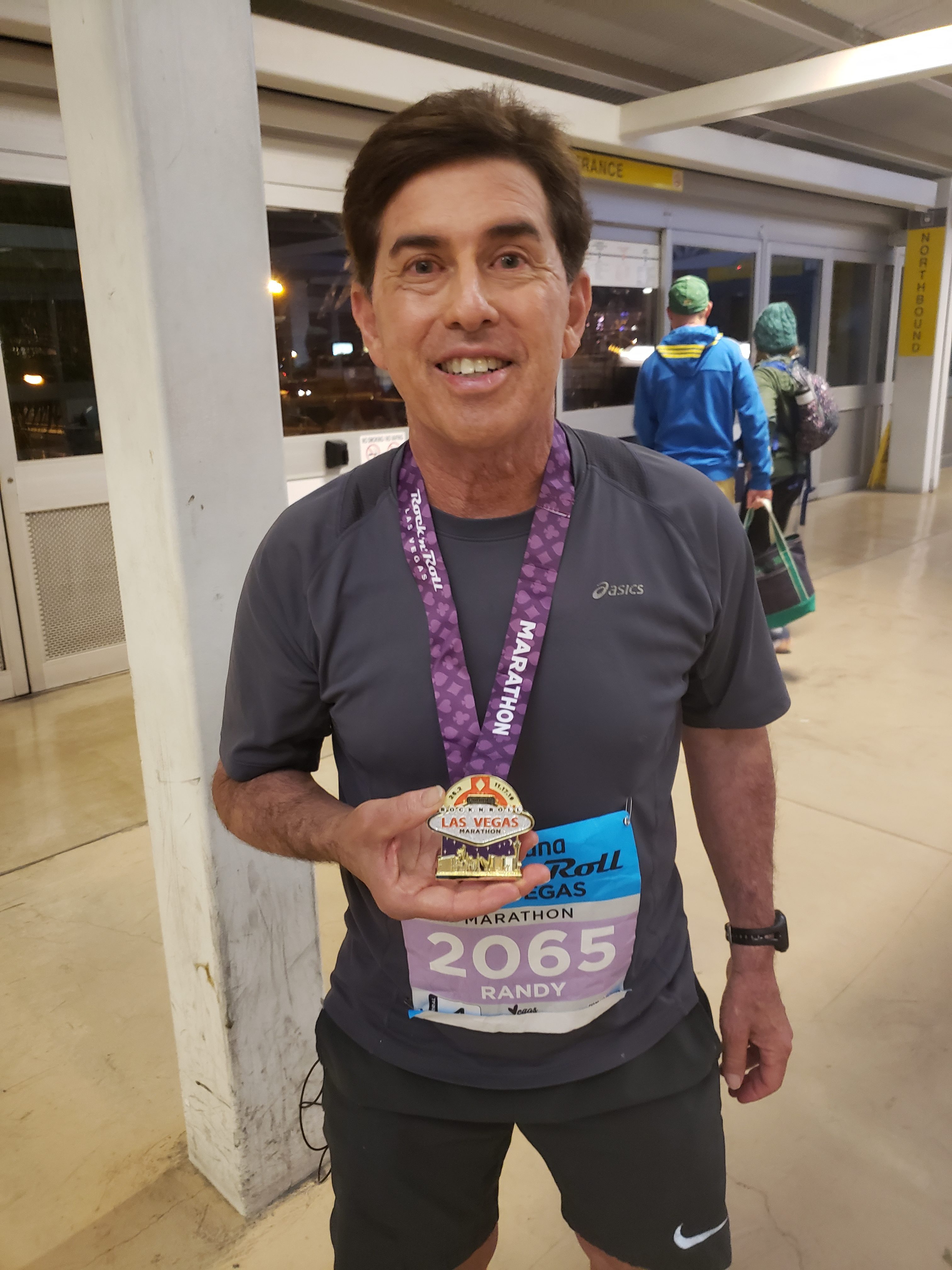 Randy Lazer started running back in 1990 as a way to step into a healthier lifestyle. As an asthma sufferer who didn’t work out much, he took it one step at a time, going out for a half-mile jog his first time on the road. It took about four tries for him to make it a full mile, but that only motivated him to go farther. In 1995, Lazer went the ultimate distance, clocking 26.2 miles in his first marathon. He completed three more by the time he was in his early 40s. Then, his stride came to a sudden stop.

The day that changed everything

One Sunday morning, in the midst of his typical training cycle, Lazer began to feel so terrible that he drove himself to the hospital. There, he suffered a heart attack, and he flatlined for two minutes. Thanks to the hospital staff and a strong will to live, Lazer pulled through double bypass surgery.

“A heart attack was the last thing I thought would possibly occur,” Lazer says. “At the time, I thought I was entitled to great health until I turned 90 or 100 years old because I ran and I was healthy, but what I learned is that I’m not entitled to the next 30 minutes.”

While rare, a heart attack can happen to anyone, at any age. That’s also what one woman found out when she was just 21 years old.

The road to recovery

Because of the stamina he’d built up with all of those marathons, Lazer assumed he’d hop out of bed after his heart surgery and start running—or at least walking. “When I got home, I couldn’t even make it up the stairs to my bedroom,” Lazer says. His new goal quickly became walking for just a few minutes every day. On that first walk back home, Lazer could only stroll for about six minutes, but he kept at it day after day. Less than two weeks later, he was walking a mile.

Soon after he hit that milestone, Lazer found out that the Rock ‘n’ Roll Las Vegas marathon was three months and three days away. His friend, who barely ran, said he’d run it with him, so they both signed up and Lazer went back to pushing his pace on the road. A mere seven weeks out from the race, Lazer turned his typical walk into a run. In those next 50 days, Lazer once again built up his mileage so he could eventually cross his first Las Vegas Rock ‘n’ Roll marathon in 2001, which would kick off his 18-year streak.

Running marathons can certainly be addictive…in a good way, of course. Just take a look at this story of the first woman who ran the Boston Marathon—and then ran it again five decades later.

Lazer kept up the marathon tradition for three more years after that initial Rock ‘n’ Roll race. In 2004, he finished it in a breezy three hours and 50 minutes. But 13 days later, he was back in the hospital, undergoing another heart surgery. “I had done the marathon with an artery that was 80 percent blocked—I was lucky I made it through,” Lazer says.

After that 2004 surgery, doctors gave Lazer about a year to live with his heart condition. “When I heard that, I really did feel this kind of shock and depression. But I held it together in the doctor’s office,” says Lazer, who only let that sadness take over for about 10 to 15 minutes while he walked to his car. “By the time I got to the car right before I called my parents, it hit me that I can’t control when I die. [I thought,] I want to get married; I want to live. I’m 45 years old, and I am having all of this taken away from me—my great career, everything,” says the now-60-year-old. “But again, it hit me: I cannot control when I die—that was the epiphany—but I can do everything possible to be as healthy as I can.” Of course, that included running.

The drive to stay healthy 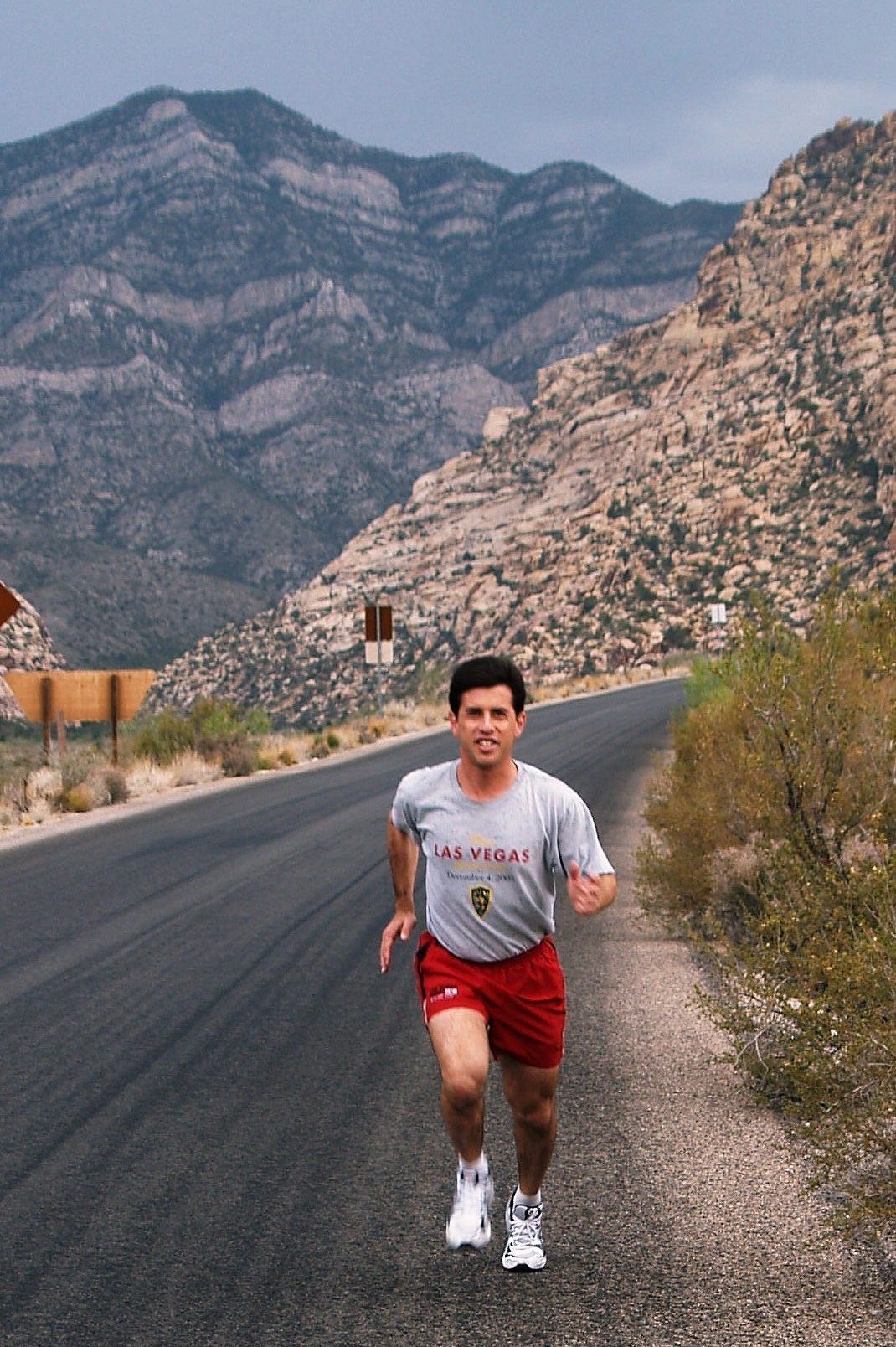 By 2008, Lazer had undergone six heart surgeries, and the last one left him debilitated. In an attempt to feel stronger, he decided to switch up his diet and, at the suggestion of a friend, started drinking more nutrient-packed juices. Eventually, he began to feel good enough to lace up his sneakers and hit the road again.

“After getting out of the hospital, my goal was not to compromise. I wanted to live my life as I desired, and that meant to continue running and be in the best shape that I can,” he says. “I wasn’t going to be sedentary and sit on a sofa and press the remote. The big thing for me was that I wanted my own life. I was going to do everything I could to get my life back.”

To Lazer, that meant running, since it was such a big part of that life. So, just months after that sixth surgery in 2008, he was back on the starting line of the Las Vegas 26.2. And this past November, he crossed the finish line of his 18th consecutive race.

Lazer credits running as one of the main reasons he’s lived well beyond that one-year prognosis he got back in 2004. “I believe I started running somehow knowing that if I didn’t, I wouldn’t be living too long,” he says. “Running is a part of who I am—I am striving to be the best that I possibly can be. It’s such a huge part of my life that my life seems out of order if I’m injured or I can’t run. It’s kind of my anchor.”

To read more about Lazer’s decades of simultaneously conquering marathons and heart problems, keep an eye out for his forthcoming book, Running Beyond Death, Reversing Heart Disease.

One Man's Journey After Having a Stroke

Doctors on the Most Miraculous Recoveries

Mallory Creveling
Mallory Creveling, a New York City-based writer, has been covering health, fitness, and nutrition for more than a decade. In addition to Reader's Digest, her work has appeared in publications such as Health, Men's Journal, Self, Runner's World, and Shape, where she previously held a staff role. She also worked as an editor at Daily Burn and Family Circle magazine. Mallory, a certified personal trainer, also works with private fitness clients in Manhattan and at a strength studio in Brooklyn. Originally from Allentown, PA, she graduated from Syracuse University's S.I. Newhouse School of Public Communications. Follow her @MalCrev on Instagram and Twitter.

25 Best Valentine’s Day Flowers to Wow the People You Love
A Surf Board Drifted from Hawaii to the Philippines and Started a Friendship Between the Two Owners
I Was Bullied on Valentine’s Day as a Kid. Here’s How I Spread Kindness on February 14 as a Teacher Now.