Hurricane Isaac destroyed over 500 buildings in a small Louisiana town, but it couldn't break the Shaffers' spirit.

The city of New Orleans does not sit at the mouth of the Mississippi River, as is often thought. The river continues southeast past the Big Easy for about 100 miles through a series of bends, where bayous and marshes crowd the wooded lowlands, before it finally empties into the Gulf of Mexico. The community of Braithwaite lies there among the myriad bays and lakes, part of Plaquemines Parish. The area, an 18-mile strip of land roughly two miles wide, straddles the Mississippi’s eastern bank. Because of its precarious location and soggy topography, the parish’s East Bank is surrounded by levees, meaning Braithwaite is essentially a huge tub—if the levees were breached, the town would fill up with water.

7:00 P.M. Category 1 Hurricane Isaac smashed into Louisiana and settled directly over Plaquemines, refusing to budge. The tidal surge from the nearby gulf pushed relentlessly through the marshlands, streaming over the eastern levees and submerging homes, cars, and streets. During Hurricane Katrina, seven years earlier, parts of the East Bank were inundated with about seven feet of water. With Isaac, at one point, in the space of just two hours, most of the East Bank went 12 to 18 feet under water.

The storm came so fast and furiously that most of the East Bank’s fire and police rescue equipment was now useless. All along the 18-mile stretch, dramatic scenes were unfolding during that awful night—people of all ages desperately scrambling for elevation in attics, on rooftops, in trees. The 2,000 citizens of Braithwaite and neighboring towns were on their own: The Coast Guard had deemed conditions too unsafe for rescue.

MIDNIGHT: “Big” Jesse Shaffer and his son, “Little” Jesse, were driving as fast as they could on the only open road out of town. It ran across the top of an earthen levee and led to neighboring St. Bernard Parish, which remained relatively dry. Big Jesse, 54, a semiretired cabinetmaker and commercial fisherman, and Little Jesse, 25, a nurse and volunteer firefighter, were now refugees, along with hundreds of other citizens of Braithwaite who had already fled.

Once across the parish line, the Shaffers got off the narrow levee road and parked in a cluster with their neighbors. Then Big Jesse noticed that one couple was missing and remembered that, as he and Jesse had peeled out, he’d seen their car in their driveway. They were probably still at home.

Borrowing his friend Lonnie Serpas’s 16-foot boat, which was docked nearby, Big Jesse and his brother-in-law Lanny Lafrance, 51, a commercial fisherman, left the levee wall and backtracked to save Shaffer’s neighbors.

2:00–3:00 A.M. Natasha Morgan, 32, and Domingo De Los Reyes, 33, had decided to ride out the hurricane at home. In the wee hours of the morning, Morgan awoke suddenly and hurried downstairs. Water was seeping in under the front door. She ran back up and woke De Los Reyes. By the time he got downstairs, the refrigerator had been toppled in waist-deep water. Then Morgan’s cell phone rang. It was Big Jesse: “We’re on our way.”

With the aid of a spotlight, Big Jesse and Lafrance steered their way cautiously through the screaming storm. Neither had ever seen conditions like these. Eighty-mile-per-hour winds whipped the deep floodwaters into six-foot waves, which threatened to flip their boat. The surrounding darkness was a labyrinth of dangers: tree limbs, electrical wires, poles, rooftops. Beneath them lay a thousand other perils: submerged trucks, street signs, drifting debris. With the horizontal rain pelting their faces and eyes, the men maneuvered their way into Braithwaite.

Meanwhile, Little Jesse, sitting in his truck to avoid the extreme weather, posted a note on his Facebook page via his cell phone: “We have a boat. Text me names and addresses.” Within minutes, the messages began pouring in: “223 Oak. Man, girlfriend, and new baby!” “410 Oak.” “7965 Highway 39. Haven’t heard from him since he went in attic.” Little Jesse relayed the disheartening news when his father returned with Morgan and De Los Reyes.

“Five people with a baby stranded on their roof on the backstreet,” shouted Little Jesse, reading from his phone. His father and Lafrance set out again into the maelstrom. A short time later, they returned with a family. A shaken young mother, Laurielle Authement, stepped from the boat onto the levee with her four-month-old baby in her arms. 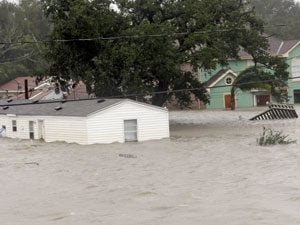 Martin Johnson, Jr., and Everett Cook were living out their own private nightmare in Braithwaite. The two parish workers had been operating a pumping station until 2 a.m., when the marsh levee began overtopping.

Johnson jumped into his truck, with Cook driving right behind him. But they were trapped by the rising waters. The only piece of unflooded ground was atop the levee itself. They made an uphill charge. When their wheels began spinning in the mud, they jumped out of their trucks, grabbed a spare tire to use as an emergency flotation device, and carried it to the highest point of the levee. Johnson called their supervisor and pleaded for rescue. He and Cook waited, standing across from each other, clinging to the tire in the thrashing rain, watching as the water swallowed their vehicles and rose up to their thighs. One step in any direction, and they would be swept away—and Cook couldn’t swim.

Then Cook felt something. “Martin, a snake!”

Johnson shone his light down into the water. Wrapped around Cook’s left leg was a white-banded black king snake. Johnson seized it and flung it as hard as he could.

A minute later, Johnson’s phone rang. It was his supervisor. “I’m doing what I can, Martin,” he said.

“It’s not your fault,” Johnson said. “You know what you’ve got to tell my children.”

5:30 A.M. Lonnie Serpas, who’d given Big Jesse his boat, was in radio contact with the parish’s emergency operations center and learned of the two men’s situation. When Big Jesse and Lafrance returned with the Authement family, Serpas sent them back out to get Johnson and Cook.

6:00 A.M. After balancing on the levee in the stinging rain for some four hours, Johnson and Cook saw the lights of a boat approaching. Big Jesse piloted over the submerged trucks and pulled the exhausted men aboard. Mustering his strength, Johnson looked Big Jesse in the eye and whispered, “Thank you.”

Billiot and Lafrance commandeered a boat that had washed up against the levee with the key still in the ignition. Kamm had brought his own boat, so Little Jesse climbed in with him. And Big Jesse kept working Serpas’s boat, now with Arcement.

Bizarre scenes greeted the rescuers: horses treading water, railroad cars overturned, cattle on the second floor of a house, homes pulled off their foundations and deposited in the street, a rooftop with two deer, a wild hog, and a man awaiting rescue. On Little Jesse’s first mission, he and Kamm saved a family of five screaming on the very peak of their mobile home, with the water only a foot away from fully submerging them. It was a mystery how the parents had gotten the three little ones—all still in diapers—onto the roof, along with the family dog.

On and on they worked all through that day. A family here. A group of ten there. Kamm and Little Jesse rescued a 70-year-old man trapped in his attic, using a fire ax to smash their way in past a ventilation fan. Big Jesse and Arcement rescued ten migrant workers afloat on canoes inside a metal storage shed, with two feet between themselves and the ceiling. Billiot and Lafrance released a family from their attic using a chain saw, and rescued, among others, a woman in her 80s and some rabbits and chickens. 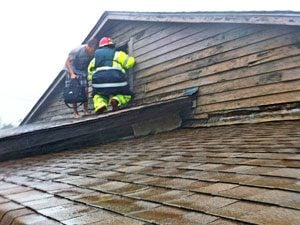 7:30 P.M. By sundown on the 29th, everyone who needed to be rescued had been. Two people had died along the East Bank, presumably caught by the waters while they slept. But without outside help, the Shaffers and their friends had made an otherwise clean sweep of the 18-mile stretch, rescuing 120 people and dozens of animals, including a parakeet in a cage.

Hurricane Isaac took every structure on that stretch of the East Bank, including 500 homes and businesses. Many who, like the Shaffers, had already lost their homes in Katrina chose not to rebuild in Plaquemines. But the feeling of community held strong. Nearby parishes donated bottled water, food, and clothing, and Little Jesse and his friends distributed the goods to anyone with a Plaquemines Parish ID. 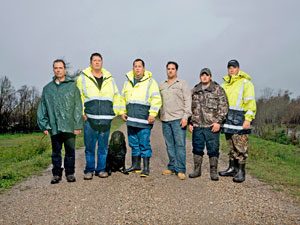 Big Jesse, too, continued to serve his neighbors. In the days following the storm, he arose every morning and waited at the levee with a boat to bring people into Braithwaite for their belongings. “You’d be surprised how thrilled somebody is to salvage just one little trinket,” he says.

He did this all day, every day—his face and lips peeling from the sun—for two weeks. At night when he closed his eyes, he was haunted by the traumatized stares of those he had saved. “I rescued 60 people, and I can see each and every one of their faces, how scared they were,” he says, his voice breaking.