Finally: A Scale That Doesn’t Weigh You Down!

Dieters can become obsessed with “the number” we see when we step on the scale to measure our progress. So, 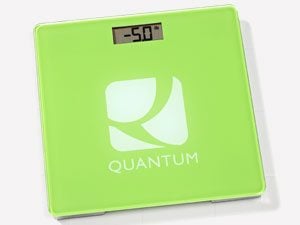 Dieters can become obsessed with “the number” we see when we step on the scale to measure our progress. So, when I came across the Quantum Scale, I realized it might just allay that dread.

Rather than displaying your weight, it shows you the total number of pounds you’ve lost (or gained) since you began dieting (and programmed the scale with your starting weight).  What more positive reinforcement could you ask for than starting the day with “-10 lb”?

As Tyra Banks said in her testimonial, “When someone’s trying to reach a healthier weight, the last thing they need is their self-worth to be attached to those three numbers.”

Too-frequent weighing can cause you to lose sight of the big picture. The Quantum Scale lets you concentrate on how far you’ve come in your weight-loss journey, rather than stressing over how much more you have to lose.

• What is the Digest Diet?

• 5 Things to Never Do After a Day of Pigging Out