After Meeting Someone Just Like Him, This Boy Learned to Accept His Disability

A teen helps a younger boy see that their shared difference is no handicap to success. 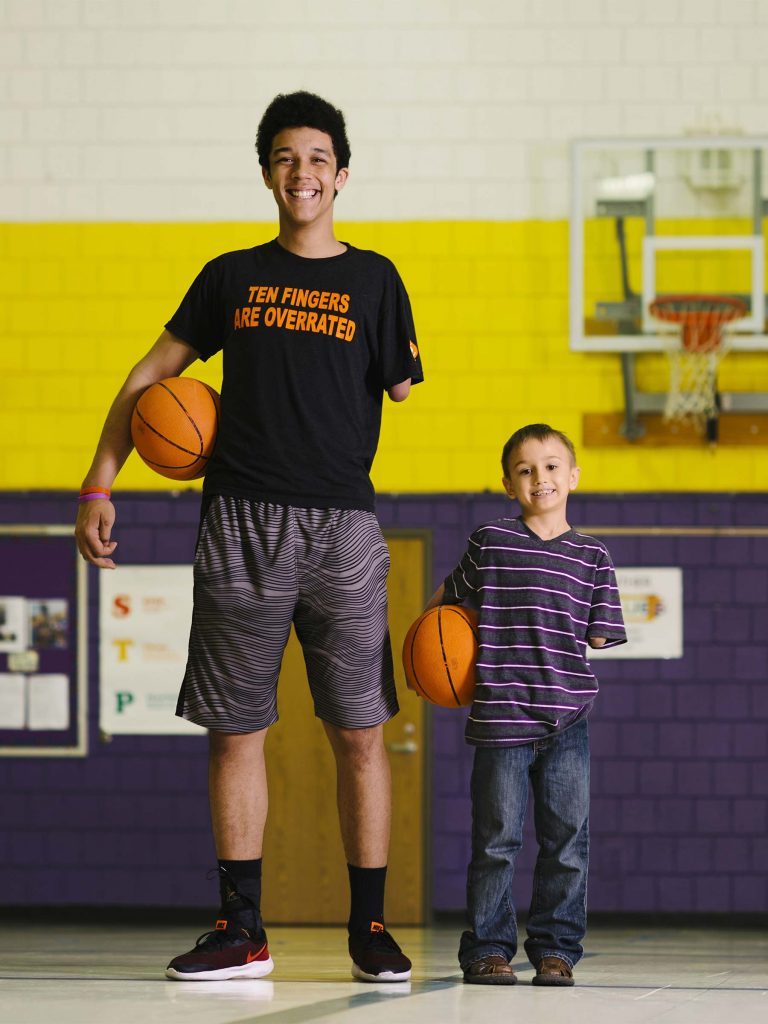 Trashaun (left), Jayce, and the motto that binds them

Jayce Crowder began noticing when he was in kindergarten that he looked different from his classmates. They had two hands. He had one.

It started when one boy teased him, says his mother, Cortney Lewis. Jayce’s bubbly enthusiasm soured to sullenness. He’d return to their Des Moines, Iowa, home with questions: Why am I different? Why me? Why?

“He actually told us he was mad at God for making him that way,” his mother says. “That was a huge dagger to the heart.”

Lewis admits she didn’t know what to do at that point. How could she provide answers to her son’s questions when she had never found those answers herself?

A few weeks later, Lewis came home from her job as an orthodontic assistant and turned on the TV to a news story about a six-foot-three eighth grader from Washington, Iowa. Trashaun Willis, then 14, had become an Internet sensation after posting videos of his slam dunks, and, like Jayce, he was missing most of his left arm. Lewis called Jayce in. He was riveted, watching dunk after monstrous dunk.

At the time, it seemed that watching Trashaun would simply be an inspiring moment for Jayce—he’d see a thriving role model with a seemingly similar congenital defect. And had it stayed just that, Lewis would have been happy. But little did she know that a family friend had already reached out to the Des Moines Register, asking the newspaper to help set up a meeting with Trashaun to build Jayce’s confidence. Check out these amazing photos of a photographer who turned kids with disabilities into superheroes.

The boys met at Washington Middle School on a Saturday afternoon a couple of months later, in April 2017, and instantly bonded. Both of them had had amniotic band syndrome in the womb, a rare condition that caused strands from their mothers’ amniotic sacs to wrap around their left elbows, stunting growth beyond that point.

The day was not spent wallowing in self-pity—it was dedicated to fun. They rode bikes around the school’s hallways, took photos, played hide-and-seek, and shot baskets.

Trashaun taught Jayce to finish with a high release and put some backspin on the ball. He even gave Jayce a shirt that says “Ten fingers are overrated.”

At one point, Trashaun did get serious with Jayce. He talked about their left arms—or lack thereof. He told Jayce he was perfect the way God made him. He said not to let anyone drag him down and that words don’t need to shake his confidence.

Since that meeting, Lewis has seen a pronounced difference in her son, who is now seven and in second grade. He recently started wrestling and loves it. Lewis points to Trashaun’s influence. Meeting him, she said, made Jayce “understand that there are others like him.”

As for Trashaun, his relationship with Jayce made him look forward to helping more kids, perhaps as a youth coach with NubAbility, a nonprofit dedicated to coaching kids with limb differences.

“Honestly, it means a lot to know that I changed Jayce’s life,” Trashaun says. Still, he never dreamed that his videos would have such an impact. “I just thought my friends would see [my videos] and be like, ‘Oh, he dunked it!’”

Next, learn the things you should never, ever say to the parent of a child with a disability.

Originally Published in Reader's Digest
Des Moines Register (November 28, 2017), Copyright © 2017 by Gannett Community Publishing. All rights reserved.  Used by permission and protected by the copyright laws of the United States. The printing, copying, redistribution, or retransmission of this content without express written permission is prohibited.