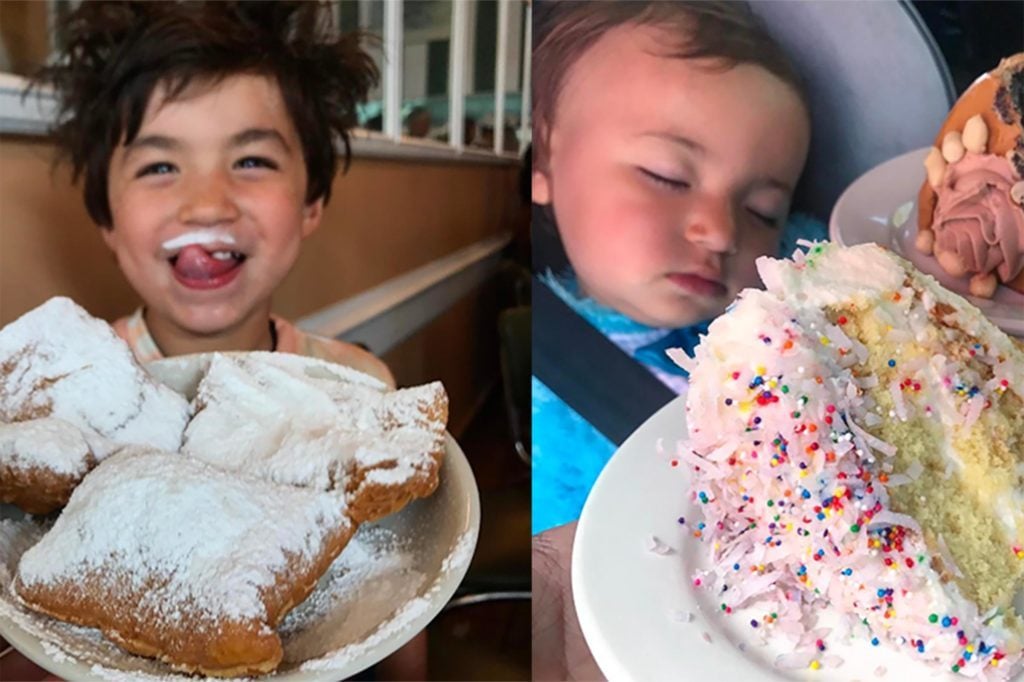 Sure, it’s actually his dad, Mike Chau, who takes the photos and posts them online, but he has his energetic and precocious toddler to thank for the Insta-fame. Food Baby (@foodbabyny), as he’s known online, boasts 159K followers (as of this writing) and has amassed a collection of more than 5,500 photos, all of mouthwatering bites juxtaposed with a sleeping, grinning, or crying half Jewish, half Chinese and Peruvian baby. Sometimes they have french fry eyebrows, a dumpling hat, or a doughnut cap. 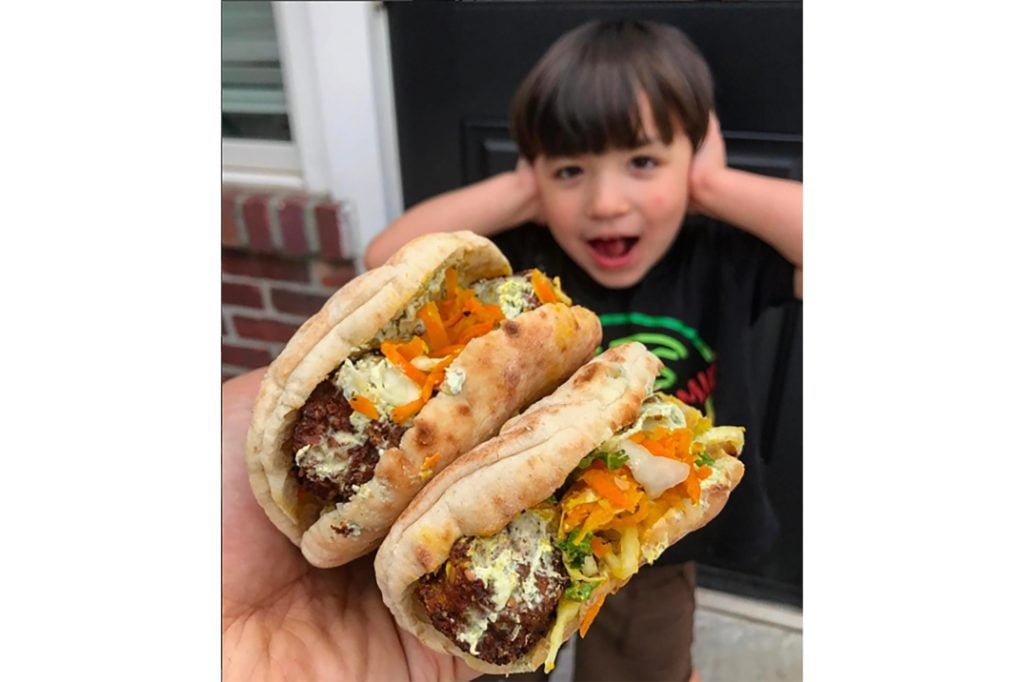 Courtesy, Mike Chau, @foodbabynyChau has always loved food. When he and his high school sweetheart turned wife, Alex, grew their family from two to three in 2013, he did what any new dad does. Chau started building a family photo album, except this is the digital age, so he posted them online instead of in a paper scrapbook, and his pride and joy was posing with food instead of stuffed animals.

“When I started out, food on Instagram wasn’t as big as it is now. I just thought the photos were funny and put them up for my family and friends to enjoy,” says Chau.

But when his son was almost one, Chau decided to create a page devoted solely to food. He posted the first picture to @foodbabyny in June 2014—it was a throwback of three-day-old Matty, posing in front of an out-of-focus bowl of indistinguishable food with his pink newborn glow, spiky hair, and a furrowed brow. He followed it up with a mass upload of around 70 more and in less than 24 hours, Matty had a virtual growth spurt, Chau’s photography skills significantly improved, and Food Baby NY was officially born. By September, they’d gone viral. 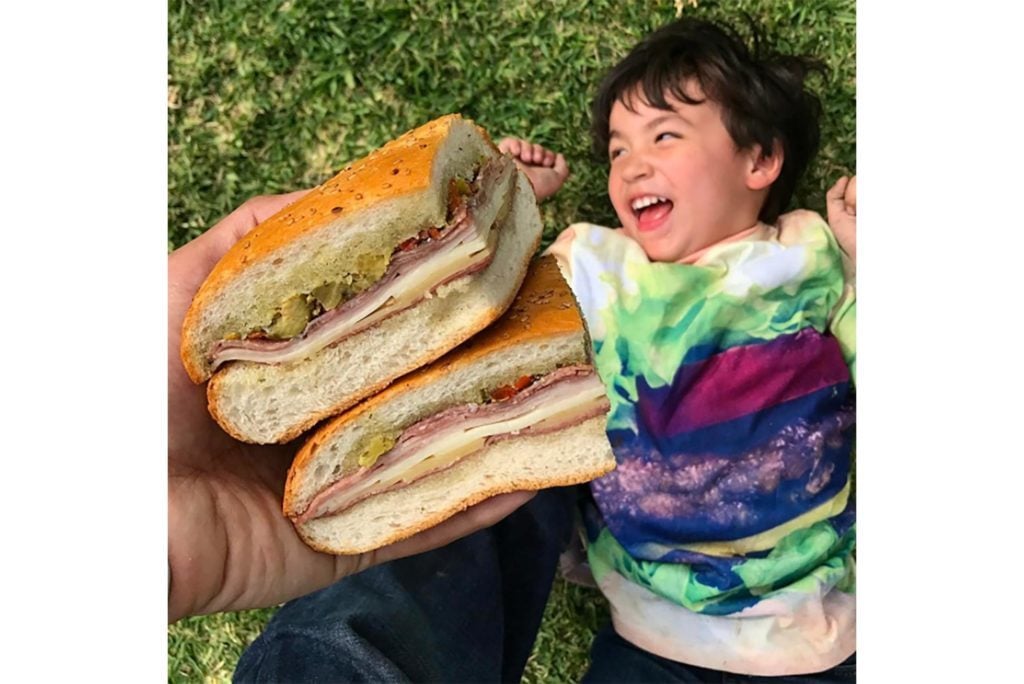 Courtesy, Mike Chau, @foodbabyny“We started getting thousands of followers and Matty was getting recognized on the street. It was pretty fast and pretty crazy,” says Chau.

That recognition is what gives Matty legit ownership over the moniker and makes his role much more than just adorable model and taste tester. He’s known for years now that he’s “Food Baby” and he milks it for everything that it’s worth. Well aware that he’s cute, he’s already a mini lady killer, happy to pose with fans and never shy about hamming it up on Snapchat.

He’s on top of the latest food trends (his opinion of the Starbucks Unicorn Frappe was a resounding “no!”) and knows all the tricks of the food pic trade (just look at this masterful noodle lift and impressive cheese pull). As for Chau’s skills with an iPhone camera, those are all natural. “I never had any training, I just see what works and look for good lighting,” he says. He’s not a fan of the above-the-plate shot (“Those can turn out great! But they’re not my thing.”) and he never uses Instagram filters. What you see is what you’ll get if you take Food Baby’s suggestions.

Being a food blogger is hard, though, so 17 months ago Matty’s parents, both 33, gave him a partner in crime to lighten the load: a baby sister, Sammy. 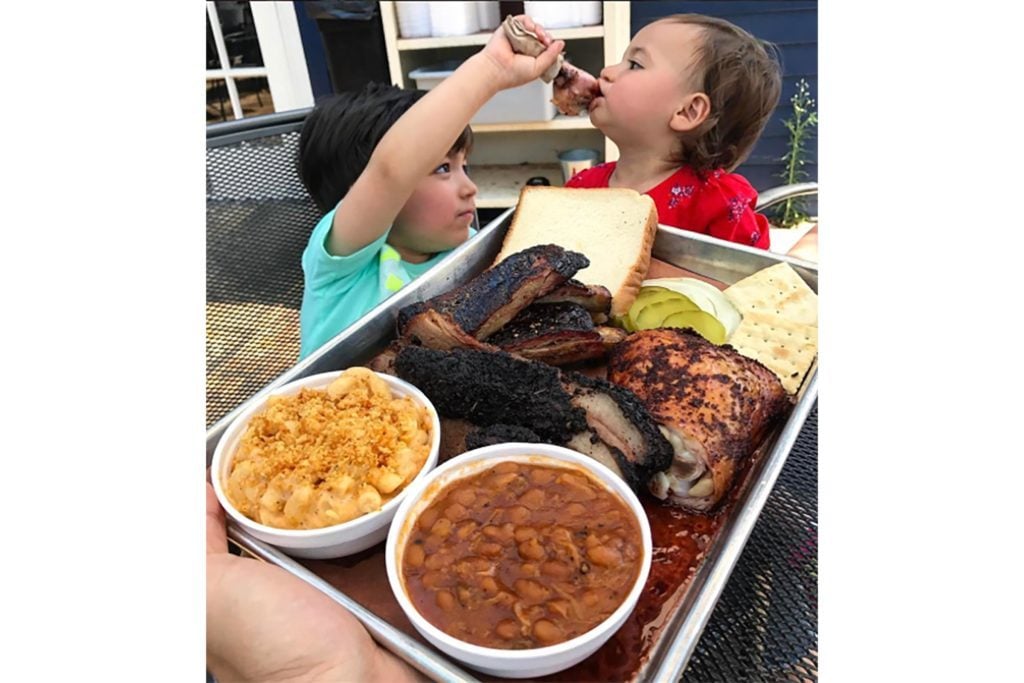 Courtesy, Mike Chau, @foodbabynyNow Sammy does much of the heavy lifting. When you’re an active almost four-year-old, playing games like Blackout City or watching YouTube videos of Gangnam Style on “your” phone (really your mom’s) is much more exciting than obediently posing with towering ice cream cones (even if you are really good at it).

And so far, Food Baby #2 is killing it. She’s got her silly face, her “I can’t believe how good this is!” look, has mastered the “Home Alone,” will show you her teeth on command, can be left unimpressed, and sometimes the food’s so good she just can’t take it. And if you see them rocking T-shirts that are both food and New York themed, no, they haven’t started their own clothing line (yet); those are from Piccolini NYC, run by Chau’s friend from junior high and his wife. 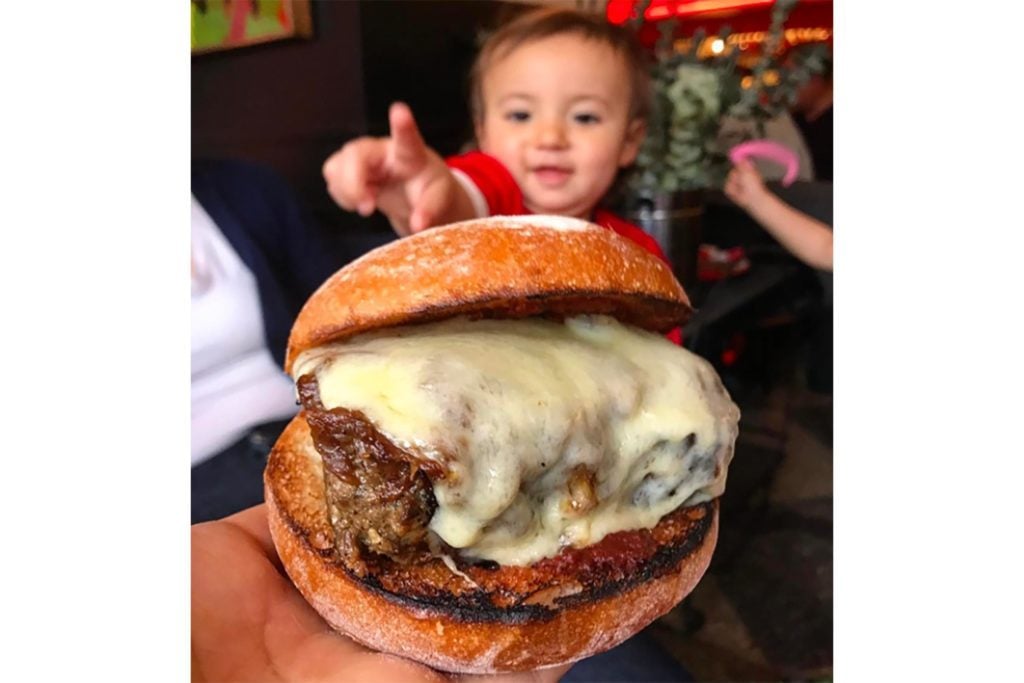 Courtesy, Mike Chau, @foodbabynyUnlike her big bro, whose palate is becoming distinctly more kid-like (he loves hot dogs, pizza, candy, and Pringles), Sammy is still game for trying just about everything (including brains, which she spit right out), and she’s a “fried rice and noodle girl,” says Alex.

So does this family of four spend all day, every day traversing the five boroughs and beyond (they’ve visited California, Chicago, New Orleans) in search of the hottest food? Far from it. Both parents work full-time, Alex in finance and Mike as a software developer (he created the app Strut, which automatically tracks all the places you’ve visited, perfect when you’re a busy food blogger’s father). During the week, Matty and Sammy attend #grandpadaycare (all amusingly chronicled on Snapchat, of course). Friday through Sunday is usually reserved for taking over the food world. 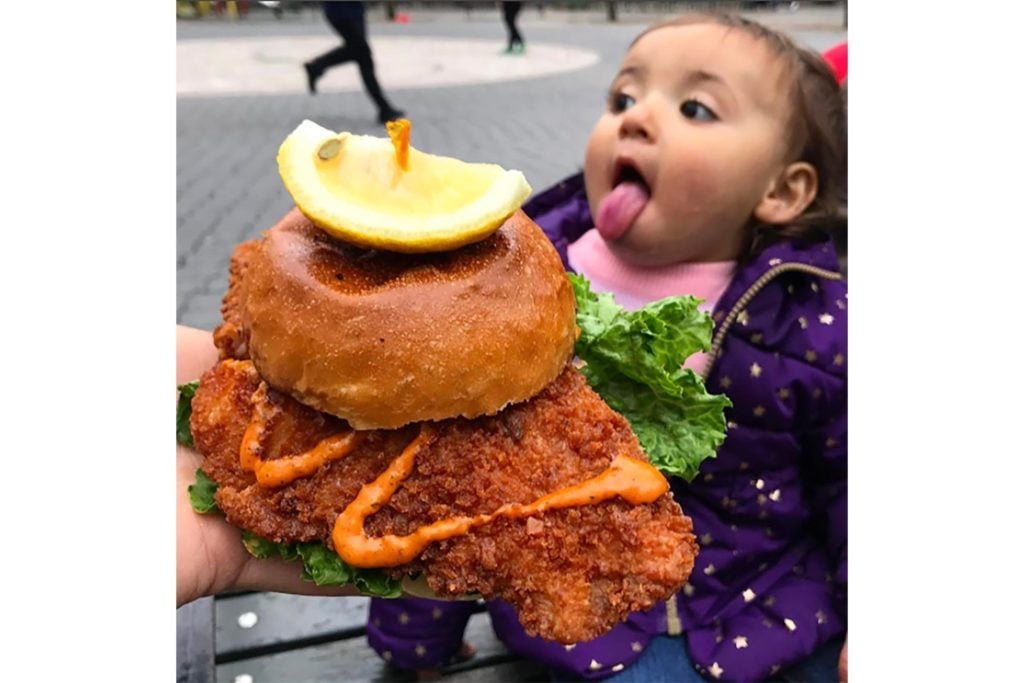 Courtesy, Mike Chau, @foodbabyny“We’re so lucky to have Alex’s dad and my dad watch them for us. They read to them, have dance parties, and cook for them so they eat the healthy diet of a regular child most of the time,” says Chau. “And Alex is the best partner I could ask for. Besides having the kids, she drives while I navigate and they’re both huge ‘mama’s babies.’”

“The best thing about all this, besides meeting cool new people, is that I get to spend all my time with my family,” says Chau. “We aren’t keeping our children as food slaves; we want them to have a good, fun childhood. So we may be constantly trying new restaurants but we’ll also go burn off energy at the park and do family activities. And, we try our hardest to instill good values in them.”

Case in point: Matty has been taught that he should always look out for his sister. And he takes his job very seriously. Besides making sure she’s well fed, don’t be surprised if you spot him in bodyguard mode (arms crossed and a stern stare) whenever little boys try to play with her. 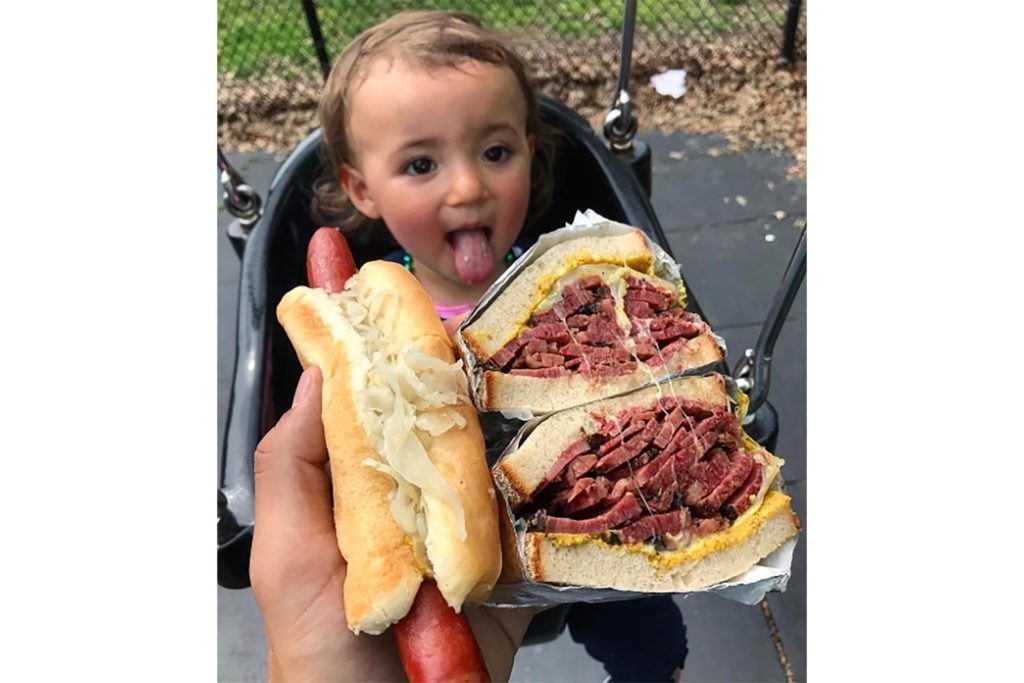 Courtesy, Mike Chau, @foodbabynyThey don’t visit places just for the photos, either. All leftovers are carefully packaged so #grandpadaycare can have a tasty reward. And, one thing that sets them apart from other food bloggers, who often post sponsored pictures or only chase fleeting food trends, is that @foodbabyny only tries foods or posts companies the family genuinely loves—Chau even turns down potential sponsors if it’s not the right fit!

“Our followers have come to trust what we order and I don’t want to steer them astray,” he says.

Around New York City, you can catch them at Nom Wah Nolita, Mimi Cheng’s Dumplings, Soft Swerve, and Emmy Squared. “I could go on and on! We have lots of favorites,” says Chau. 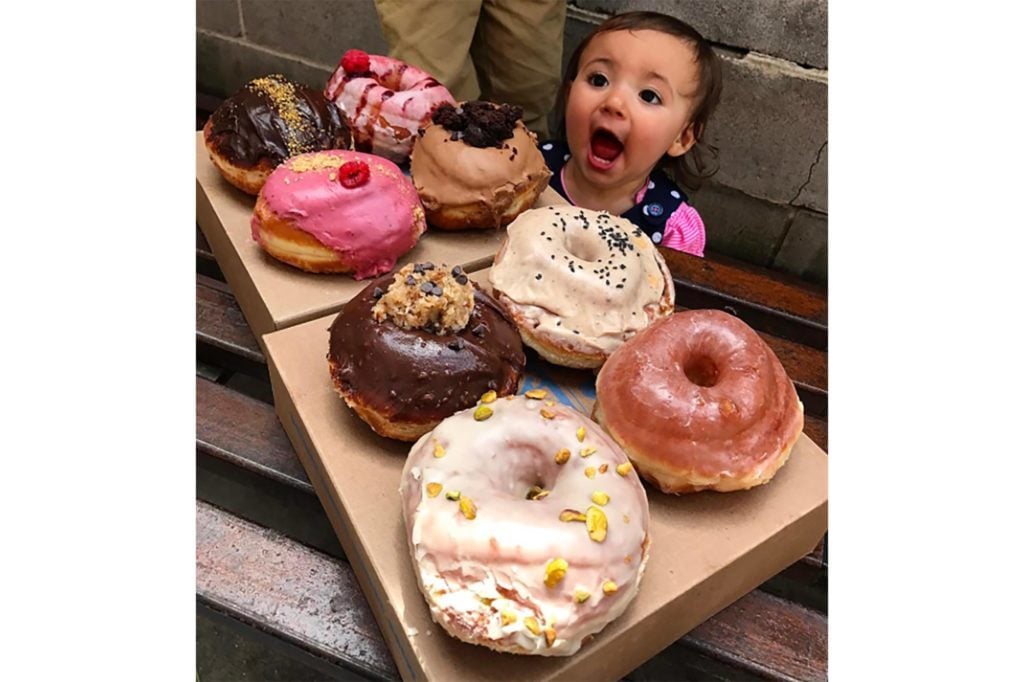 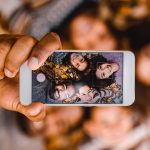 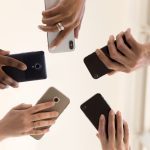 Can You Really See Who Views Your Instagram Profile?