Can 4 Hugs a Day Save a Marriage?

Humor writer Tim Dowling experiments (to his wife's dismay) to find the secret to a happy marriage. 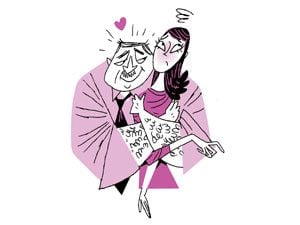 Steve Wacksman for Reader's DigestMy wife and I do not say “I love you” to each other every day or even once a month. I don’t begrudge couples who do, but I personally believe there are lots of ways to express one’s feelings that don’t rely on those three words uttered in that exact order on a regular basis. It’s perfectly possible to replicate the gist of a commonplace exchange like “I love you” and “I love you too” using slightly different language. In our house, for example, we prefer “You’ll be sorry when I’m dead” and “I know.”

Unfortunately, nothing I have read about maintaining a happy, healthy relationship supports my position. All the tips I’ve absorbed over the years have stressed the importance of making an effort, of saying the actual words out loud and forcing oneself beyond the embarrassment that comes with doing anything out of the ordinary for the first time. It’s invariably presented as difficult and time‐consuming work.

But I want love to be easy, and for that reason, I am susceptible to any method that sounds as if it might constitute a shortcut. This was what first attracted me to a newspaper article suggesting that four hugs a day is the secret to a happy marriage.

“Four hugs a day,” I say as my wife tries to squirm her way out of hug one. “I think it’s the way forward.”

My approach for hug two, just before lunch, is from the front—moving in slowly, arms low, palms showing, approximately the technique you would use to take a picnic basket away from a bear.

“Thank you,” says my wife, petrifying under my touch. She doesn’t seem to be responding positively to the treatment, but that’s OK. One of my favorite aspects of the quick‐fix prescription is the total lack of nuance, subtlety, or follow‐up. The newspaper article doesn’t suggest alterations to the technique in the event of a poor outcome. It just says “four hugs.” I find I’m even beginning to enjoy her irritation a little. It doesn’t matter whether she likes it or not. I win either way.

“Already?” she says when I move in for hug three at about sunset.

“No one said this was going to be easy,” I say.

When it comes time for hug four, she is nowhere to be found. I know she’s home—the car is out front—but eventually I give up looking.

A week or so later, I read about something called whisper therapy. Apparently it involves a lot of eye contact and the regular whispering of certain positive sentiments to each other. It sounds incredibly irksome, and for that reason, I can’t wait to try it.

Things get off to a bad start. When I steal up behind my wife and whisper, “You are special,” in her ear, she hits me over the head with the hairbrush she is holding.

Over the next few days, she grows eerily patient with my habit of leaning in at odd moments to whisper things like “Nice shoes,” “You’re magic,” and “Kind to animals.” I think she is in denial about the therapy’s awesome power to annoy.

When it’s apparent that this is going nowhere, my wife and I enter a phase where we periodically jab each other in the neck with two fingers, accompanying each strike with a short, sharp hiss. We learned the technique from watching Dog Whisperer, and it began as an efficient, no‐nonsense way to clear people from your personal space or get their attention if they seemed not to be listening.

But over time, it became a mildly painful form of affection, and then, thankfully, it got old.

At the peak of the publicity surrounding the 5:2 Diet—the one where you fast for two days a week and do what you like the other five—we try the same on‐again, off‐again formula within our marriage. My wife, a devotee of the 5:2 Diet, is intrigued by the prospect of being married to me only two days out of seven, until I explain that it’s not how it works—for two days a week, we will be extra‐married. On those two days a week, in between texts that read “Pick up booze” and “What printer cartridge do I need?” I would slip in a few romantic notes, like “I appreciate everything you do.” I know that’s not terribly good, but it’s actually my first go at being amorous.

More recently, I came across a range of intimacy exercises so powerful, they are said to be able to make strangers fall in love.

Once again, I zero in on the easiest of the lot: a few minutes spent facing your partner, with your flat, extended palms as close together as possible without touching each other. The power of this exercise is undeniable—my wife can stand it for only a few seconds without shuddering with something that looks, to the untrained eye, like revulsion. Such is its power to annoy that for two weeks, I insist on having a go every time we cross paths.

If marriage teaches you anything, it’s that there is value in the occasional lame gesture and half‐assed experiment. It shows you’re trying.

Tim Dowling is an American journalist for the British newspaper the Guardian.

Tim Dowling
Tim Dowling is an American journalist for the British newspaper the Guardian.