Funny: The 2013 Academy Awards They Forgot to Hand Out

We’re all about Jennifer Lawrence tripping out on victory…but who were the real champions of the 85th Academy Awards? Here are our honorary superlatives. 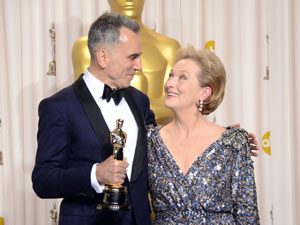 When a triumphant Daniel Day-Lincoln took the stage to accept his record-setting third Best Actor Oscar, eternal Awards fixture Meryl Streep successfully solidified her own role as Hollywood’s Awesome Grandma by giving DD-L a sloppy, lipsticky smooch on the cheek meat. Some sources report that consummate professional Day-Lewis rehearsed this moment for months in advance by making nightly visits to his weird aunt’s Boca Raton condo.

If you were one of the many intelligent viewers who picked up a book or strategically conked out before the ceremony’s midnight conclusion, you probably still woke up to headlines that FLOTUS Michelle announced the final Oscar winner via satellite. Apparently, this was a problem for some people—but the only ones who really had a right to be upset were those silent Marines in the background. What if one of them was in the middle of an awesome joke, now never to be finished? Awkward. The world may have just been deprived of the greatest Humor in Uniform entry ever. Thanks a lot, Affleck.

Ang Lee’s newest scored four Academy Awards last night, making it the ceremony’s biggest winner in terms of Oscars-per-Tigers. But did you see it? Did anybody? Even with the pointless Best Picture trailers they screened all night, it’s hard for an outsider to tell what this movie is actually about. Our best guess: During a devastating nor’easter (likely blamed on global warming) Noah’s ark crashes into a computer animation studio. Colors ensue.

Life of Pi cinematographer Claudio Miranda, Zero Dark Thirty sound editor Paul N.J. Ottosson, and Skyfall sound editor Per Hallberg all received statues for their various skills last night. Skilled though they may be, you don’t need to see pics of these men’s lustrous wizard manes more than once to convince us of what’s REALLY going on here; if these three sages aren’t kept happy, their combined wrath could surely reawaken the Dark Lord Sauron.

In his own words, while accepting a Best Original Screenplay Oscar for Django Unchained, Tarantino managed to squeeze this gem in his thirty seconds: “I actually think that like…. if people are knowing my movies 30 or 50 years from now it’s gonna be because of the characters that I created, and I really only got one chance to get it right. I have to cast the right people to make those characters come alive and hope they live a long time… and boy, this time did I do it.”

Though emcee MacFarlane’s chemistry with his own ego didn’t quite hold up to the buddy-presenter magic Tina Fey and Amy Poehler showed at the Golden Globes, he did show tremendous restraint in not slipping into Stewie Griffin voices all night. Still, MacFarlane successfully turned his hosting bits into a live-action episode of Family Guy, breaking up rollicking musical numbers about celebrity cleavage with arbitrary cutaways to alcoholic sock puppets, a lingering Star Trek feature with immortal nerd crush William Shatner, and a Sound of Music gag. Some found his material tasteless. But, to be fair, Hollywood pretty much gave the thumbs-up to Nazi jokes when they gave Inglourious Basterds all those nominations a few years ago.

Did you enjoy the Oscars?