These clever—no, BRILLIANT!—fixes to some truly vexing problems. (Spoiler: The musical way one department store reprimanded shoplifters might be the smartest solution of them all.)

For She’s a Jolly Good Stealer!

Why didn’t I think of that?! The store switched to a more painful deterrent: public shaming. The management hired a marching band, bought flowers, and made signs celebrating a “10,000th shoplifter.” Then, when security spotted a woman on the in-store cameras nicking some clothes, employees descended on her, jubilantly saluting her light-fingered ways. The embarrassed woman stood stunned amid the fracas. Then she pulled the party hat off her head, took a piece of “10,000th shoplifter” cake, and made her escape, the band in hot pursuit.

It Used to Be Algebra That Made Us Sweat 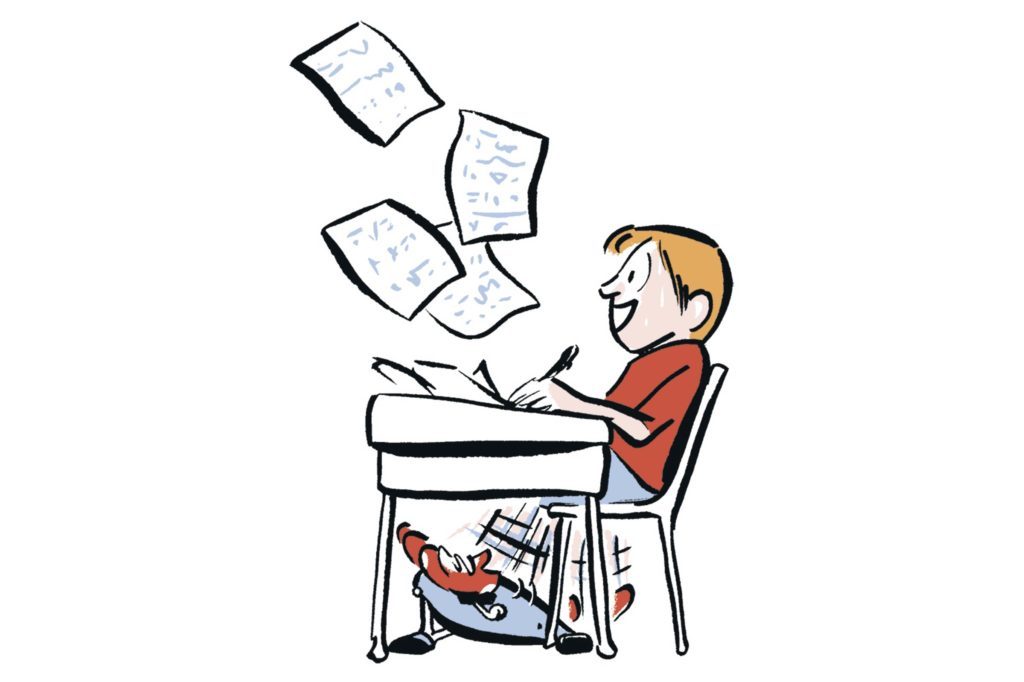 Nishant Choksi for Reader's DigestHere’s the problem: Eighth graders fidget by nature. Add math to the equation, and you’ll have kids bouncing off the walls, passing notes, and throwing spitballs—anything but concentrating on schoolwork.

Why didn’t I think of that?! A North Carolina math teacher installed small bike-pedal -exercisers—think cycling machines without the seats or handles—under students’ desks with the hope that the kids would work off some nervous energy and stay focused. “Before, they were drumming on their desks; they were touching other people,” the teacher, Bethany Lambeth, told WRAL in North Carolina. “They don’t do that anymore. Their feet are getting the movement out. There has been a huge increase in the quality of our students’ work and a decrease in the amount of missing work.” 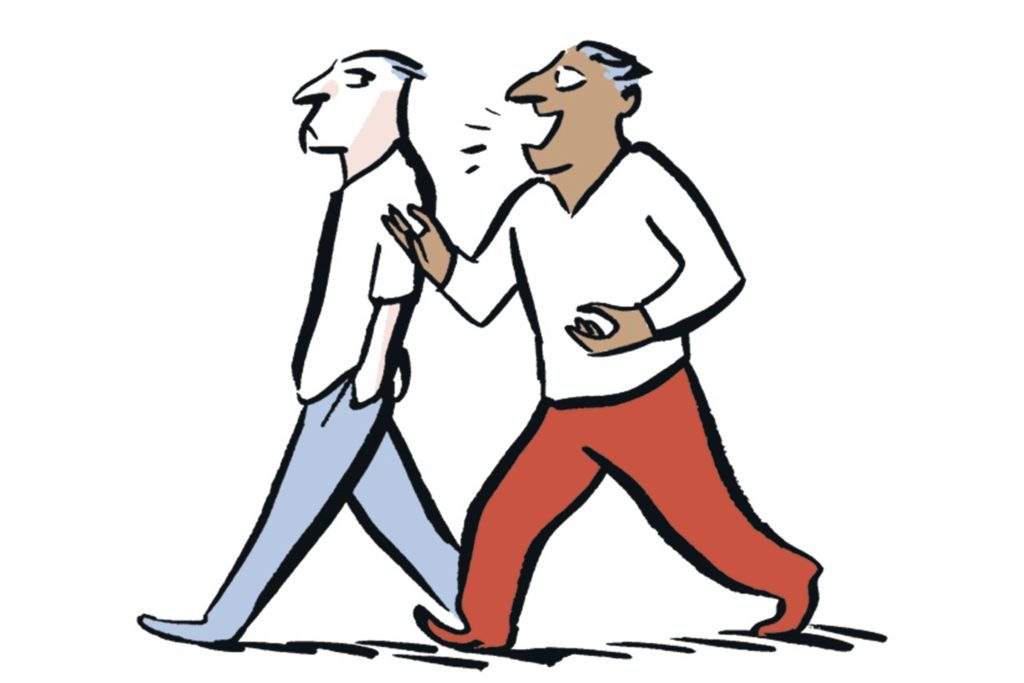 Nishant Choksi for Reader's DigestHere’s the problem: Actually, this story centers on two problems: Americans’ lack of exercise and their increasing sense of social isolation. (The National Science Foundation reported in 2004 that 25 percent of Americans say they lack any meaningful companionship.)

Why didn’t I think of that?! Chuck McCarthy has a solution to both. He walks people. No, he doesn’t use a leash, but for $7 a mile, McCarthy will amble about the streets of Los Angeles with clients, many of whom simply want a pleasant chat or a sympathetic ear to bend, all while getting a little exercise. McCarthy, an “under¬employed” actor, told the Guardian, “I try to listen more than talk.” Feel free to laugh, but business is brisk enough that he has had to hire five apprentice walkers. After all, venting to a human is a lot more satisfying than flaming strangers online. “Tweeting about it and getting no response just makes you feel sadder,” says McCarthy. 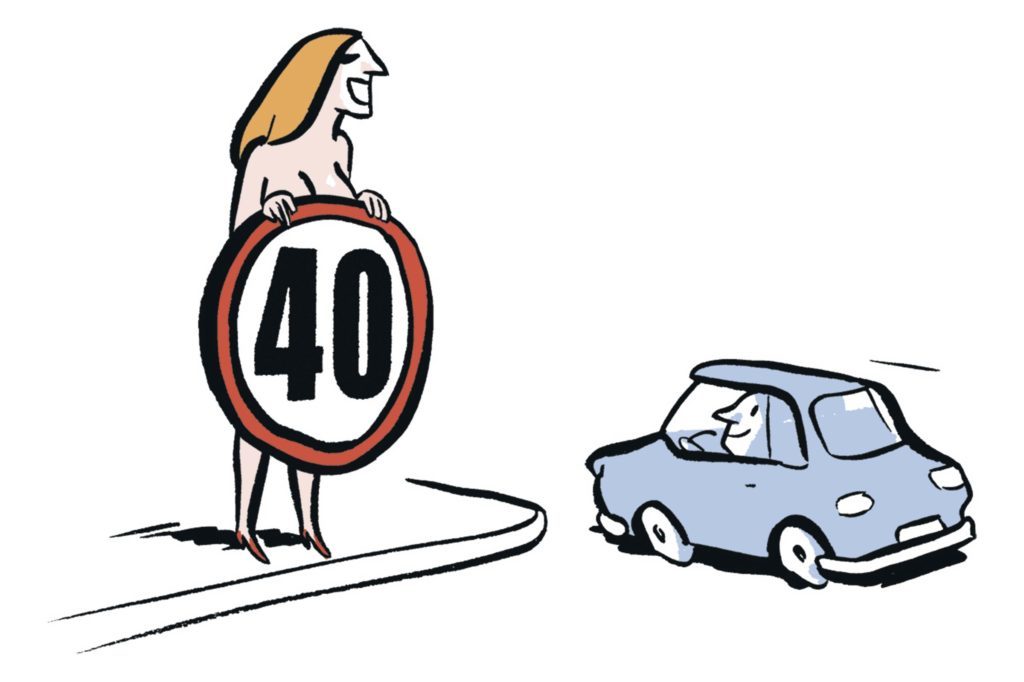 Nishant Choksi for Reader's DigestHere’s the problem: Russian roads are notoriously dangerous, resulting in more than 28,000 deaths annually, despite the efforts of many local governments to slow down speeding drivers.

Why didn’t I think of that?! Of course, they had never hired topless women to stand on the sides of roads. These “road safety assistants,” as they’re euphemistically referred to in the town of Nizhni Novgorod, hold signs with the posted speed limit, hoping drivers will slow down and take a closer look. And—this may be hard to believe—they’re getting noticed. “It’s a super thing. Amazing,” one enthusiastic male driver told the Mirror. “I’d like to see more of this by the road.” We’re sure he would, and so would many pedestrians, who say intersections are safer now that drivers are taking their feet off the gas to check out the … speed limit. 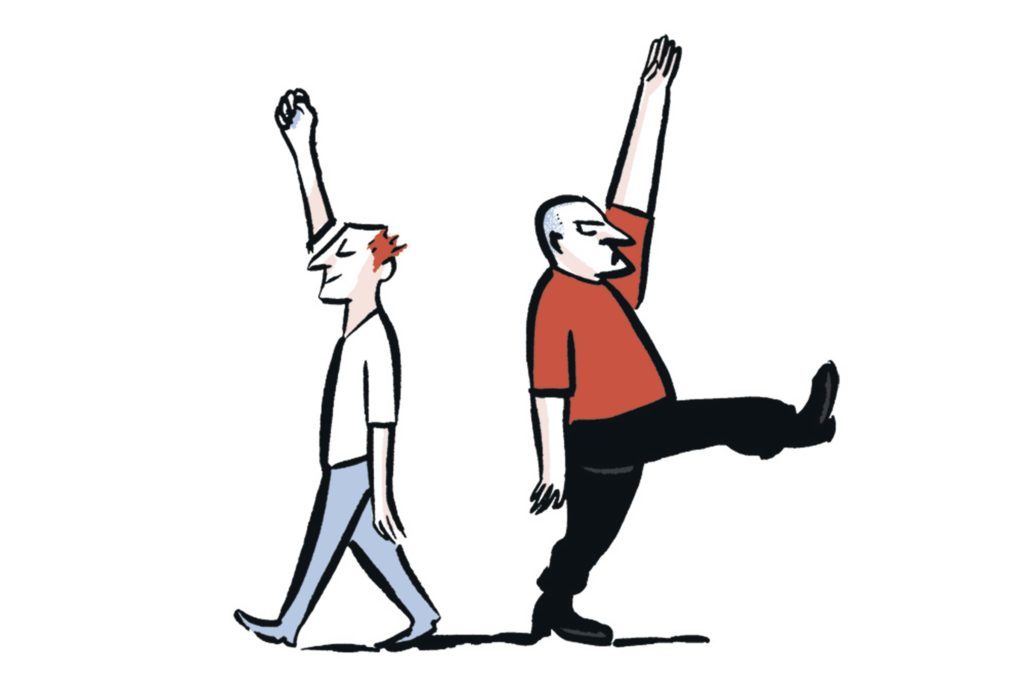 Nishant Choksi for Reader's DigestHere’s the problem: Every year, neo-Nazis parade through the German town of Wunsiedel to celebrate the birthday of Adolf Hitler’s deputy, Rudolf Hess, who was buried in his family’s plot there before his remains were disinterred in 2011 and cremated. And every year, Wunsiedelians are less than thrilled.

Why didn’t I think of that?! The German anti-Nazi group Right against Right hatched a plan to surreptitiously turn the 2014 march into an anti-Nazi walkathon. For every meter the skinheads walked, local businesses and residents donated 10 euros ($12.50) to EXIT-Deutschland, an organization devoted to reforming neo-Nazis. News of the campaign helped line the march with people ironically cheering on the 250 Nazis while holding signs that read, “If only the Führer knew,” reported vice.com. When it was over, the parade had raised over $12,500 for EXIT-Deutschland. Tweeted one German: “This is how one should fight neo-Nazis—and not by behaving even more violently than them.” 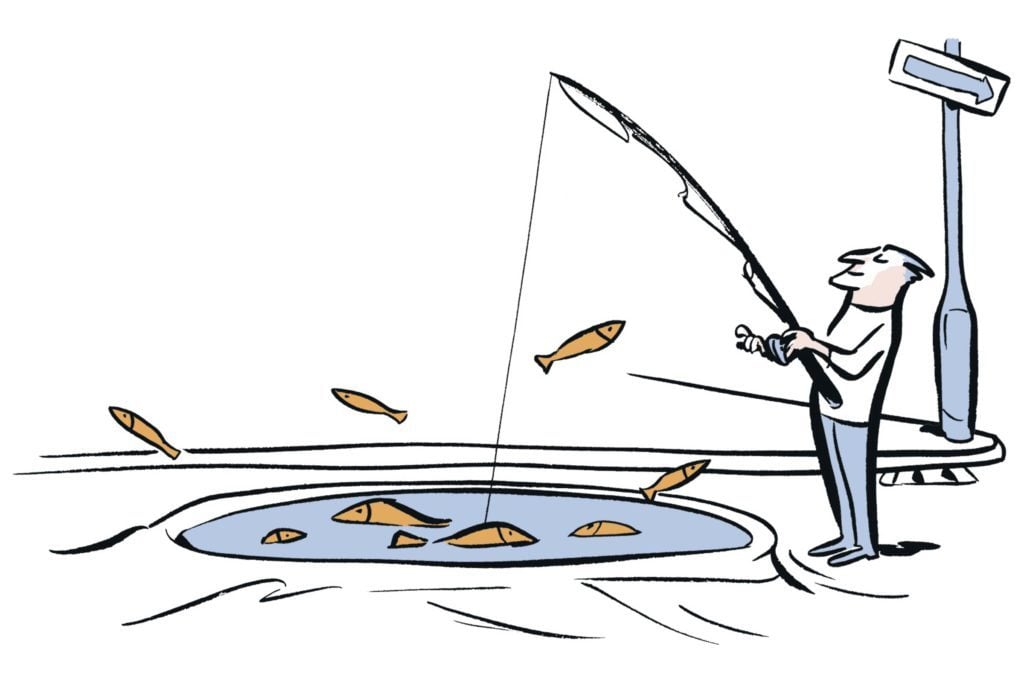 Nishant Choksi for Reader's DigestHere’s the problem: A gas and utility company working on a Detroit street dug a 4-foot-wide, 15-foot-long, several-foot-deep hole—and then inexplicably left it there. Meanwhile, thanks to a broken water main nearby, the hole quickly filled with water. For three years, community members asked the city for help, but they came up empty (unlike the hole).

Why didn’t I think of that?! Neighbors turned their urban crater into a glorious fishing spot by filling it with carp, bluegills, and even goldfish. One neighbor told fox2detroit.com, “Why not do something positive out of something negative in our community?” And thanks to the publicity, says the Detroit Free Press, the leak was fixed, the hole patched, and the fish placed in a bathtub in preparation for their new home in a community garden pond.

Here’s the problem: You’ve discovered that your beloved teenager—the child you rocked to sleep and whose boo-boos you kissed—trolled someone online. Do you A) explain the error of his ways, B) take away his devices, or …

Why didn’t I think of that?! … C) humiliate him in front of his friends. That, says KCAL in Los Angeles, is what one anonymous mother decided to do. In an effort to teach her son the lesson of all lessons, she took over his Facebook account and left this post: “Hi, this is B—-’s mom. I wanted to let all of you know that he is no longer allowed on Facebook due to choices he made. He posted on Facebook personal information about someone that was rude. Because he chose to make her mad by spreading personal information, I thought he should know how it feels when the tables are turned. He wet the bed until he was 8.” Making matters worse for the boy, some of his friends “liked” the post.

Luckily, She Gets Mileage Points 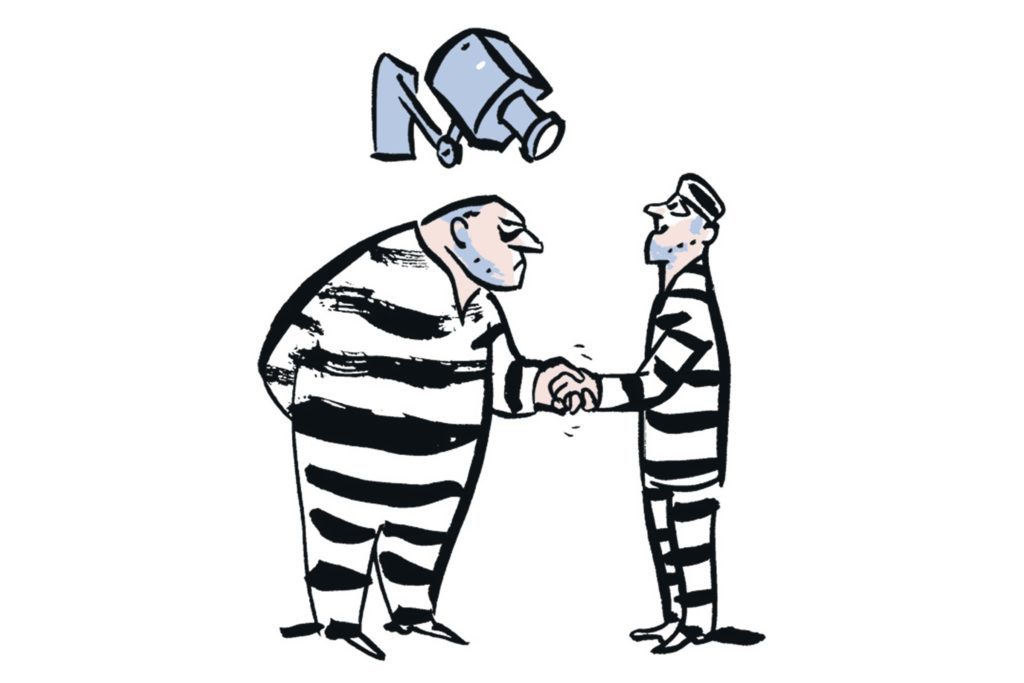 Nishant Choksi for Reader's DigestHere’s the problem: To stem violence in the local jails, the Santa Clara County, California, sheriff wanted to install security cameras. But the county informed her that it would take two years and up to $20 million to go through a process “that includes seeking bids from vendors, reviewing construction documents, and testing security equipment,” reported the Mercury News.

Why didn’t I think of that?! Sheriff Laurie Smith responded by taking a shopping trip to Costco, where she bought 12 household security cameras for $761.24, charging them to her own American Express card. The cameras, which were set up in the jail’s maximum-security housing pod, “will capture views of the multipurpose room, the exercise yard, and each of the 50 or more cell doors,” wrote the Mercury News. “There cannot be a delay because of bureaucracy. That’s unacceptable,” said Smith, who expects to replace the Costco cameras with the county’s whenever they arrive.

Here’s the problem: When you gotta go, you gotta go, even if you can’t find a bathroom. In San Francisco, public urination was leaving a disgusting stench and offensive runoff that cost the city $2 million a year to clean up, stated local news station KPIX.

Why didn’t I think of that?! How about a paint job for the most problematic areas? According to the manufacturer, a product called Ultra-Ever Dry “repels water, some oils … and other liquids.” That last part—“other liquids”—is the key. Thanks to Ultra-Ever Dry, urine bounces off painted walls—and back onto the offender. Is it working? “So far, so good,” San Francisco Public Works spokesperson Rachel Gordon told sfgate.com. Philadelphia is conducting a trial run in its subway stations.