Gun Control: The Most Thoughtful Responses

These thoughts on gun control will make you consider the issue. 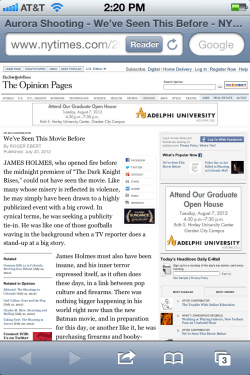 Since Friday’s killings in Colorado, we’ve been listening in to the myriad conversations about gun control. Here are the ones that we found most thoughtful.

“Whenever a tragedy like this takes place, it is assigned catchphrases and theme music, and the same fragmentary TV footage of the shooter is cycled again and again. Somewhere in the night, among those watching, will be another angry, aggrieved loner who is uncoiling toward action. … Should this young man—whose nature was apparently so obvious to his mother that, when a ABC News reporter called, she said ‘You have the right person’—have been able to buy guns, ammunition and explosives?”—Roger Ebert, “We’ve Seen This Movie Before,” The New York Times

“In the days ahead, we will undoubtedly hear some pundits suggest that it is too easy to access weapons and body armor. Or that too many of us have been desensitized to violence by modern popular culture. Others will argue that the social networks that traditionally might have offered support have been badly frayed or lost altogether. These and many other issues are of course worth addressing. In the present moment, however, Colorado and the nation are focused mainly on grieving over yet another mass shooting that has destroyed so many hopes and dreams.”—Denver Post editorial

“Only fools believe there are easy answers to the problem of homicide by firearm. Guns are part of American culture.”—Francis Wilkinson, “The Gunman This Time,” Bloomberg

“People say they want to keep their guns in case criminals with guns come for them, and others say it’s an impossible situation to solve, guns being so entrenched in North American culture. Well, all of that applies ten times over in the favelas of Rio which are, or were, much more infested with guns than any slum in America. Up in some favelas the gangs had guns that could bring down helicopters.”—Matthew Chapman, “Gun Control, Rio de Janeiro, Colorado and the USA,” Huffington Post

In everything, there is a pattern: most school shooters share these traits.  (This person was shot, but still doesn’t hate guns.)

Amazon Scams to Avoid at All Costs