Why I’m Convinced a Really Good Sandwich Can Heal Anything

A care package from Philadelphia provides a leukemia patient with an unlikely health food. 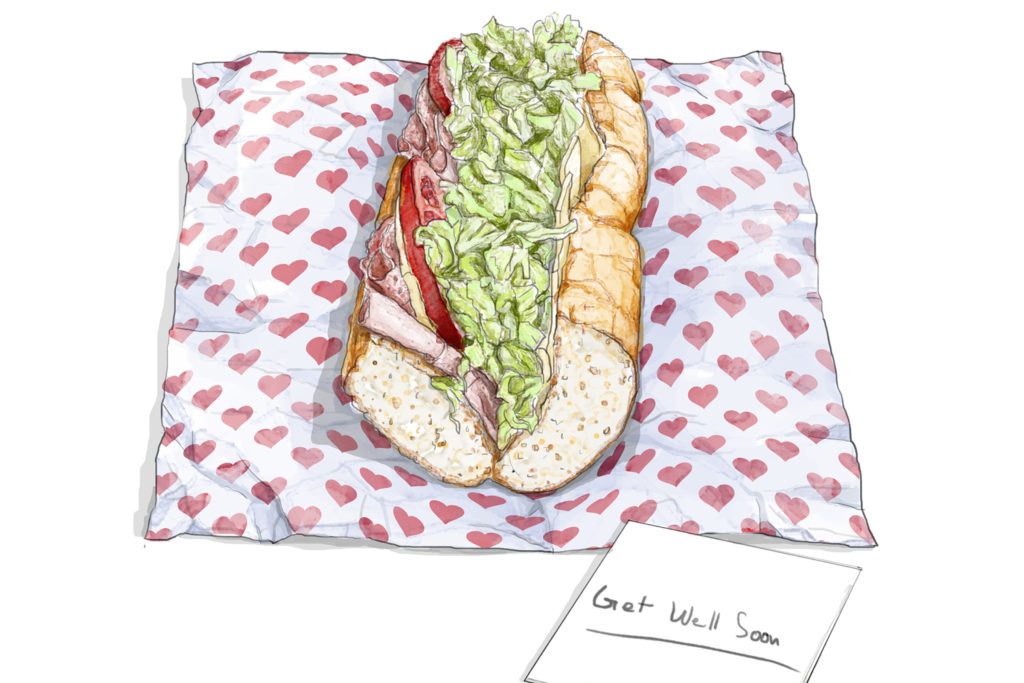 Ellaphant in the room for Reader's Digest

“You know you can’t eat that,” said my then-girlfriend, Jessica.

I was clutching a classic Philly ­Italian cold-cut sandwich in my hands, and I looked at her, un­comprehending. “You can’t leave meat and vege­tables under the Texas sun all day,” she continued. “It’s a salmonella hothouse.”

No one had been home when the hoagie arrived. It had been sitting in FedEx packaging on the stoop of a friend’s house in Houston, where we were staying during my clinical trial for leukemia. The disease hadn’t responded to the initial treatment, and, as it happened, my oncologist had just warned me, “We may have to put you on a bland diet.”

As the saying goes, sometimes the cure is worse than the disease. I held that sandwich in my hands and gazed upon its beauty: the creamy tan roll, crisp outside and squishy inside, encapsulating a perfection of ham, salami, capicola, tomatoes, onions, and lettuce, sprinkled with salt and oregano and drizzled with olive oil and wine vinegar. This was not just any hoagie. It was a hoagie from my childhood shop, the Drexel House in suburban Philadelphia, sent as a good-luck gesture by my brother.

It can, though, emit a sour odor after sitting, hermetically sealed, in the November Houston heat. I took a bite anyway. Then another. The flavor was slightly … off. Yet each bite conjured a blur of childhood memories. My father, with his crooked smile, who would die of cancer at 43. My mother, a 1950s housewife, in her apron. Pinball at the pizza joint. Baseball in the backyard. The girl in fourth grade who swung her leg back and forth, flipping her shoe on and off.

This was some hoagie.

I ate every bite, honoring the spirit in which it had been sent. The slight pang in my belly would pass, right? Wrong. Later, in bed, I was awakened by a horrible rumbling in my gut. I raced to the bathroom, where I stayed the rest of the night, throwing up.

The next day, I began the leukemia treatments. I plunged a small vial into my upper thigh, an act I would repeat three days a week for months. I suffered no side effects. No headaches. No fever. No nausea.

I credited the hoagie, but Jessica was skeptical. “You got lucky,” she said.

That was 1985, and things since then have mostly gone well. My spleen was removed, but I haven’t missed it. I’ve been in and out of remission, but mostly in.

This was not just any hoagie. Each bite conjured a blur of childhood memories.

I don’t know if anyone has researched the merits of believing in a hoagie, but believing in the power of love communicated through the offering of food strikes me as not as crazy as it sounds. I’m not talking about superfoods. Nor do I dispute a connection between diet and disease. I’m talking about the spirit with which a food is offered and received and the psychic healing it provides, like a jolt of unseen electrical current.

In January of 2015, my doctor discovered I had fallen out of remission again. After the diagnosis was confirmed, the first thing I did was beeline to Taylor Gourmet for a cheesesteak. The roll was overstuffed with flavorful, tender, well-seasoned meat, gooey with melted American cheese.

The problem was, I could barely eat the thing. I was feverish. Achy. Deeply fatigued. Not just not hungry but frankly revolted by the idea of eating. I nibbled, hoping to tap into the magic of restorative nostalgia.

The magic barely flickered. And over the next few days, I uncharacteristically picked at my food, forcing a couple of spoons of breakfast into my system just to eat something, neglecting lunch altogether, and scarcely touching dinner.

Dispirited and weak, I went to the clinic for a blood transfusion. After I returned home, my temperature rose into the low 100s.

Around 5:30 that evening, a close friend stopped by with an enormous pot of homemade beef stew. “Wish I felt up to eating it,” I told Jessica after he left.

My temperature hit 102, and Jessica, now my wife, called the doctor, who said I had to go to the hospital. “If I can bring the temperature down within the next hour,” I pleaded, “can I stay home?” I could.

I furiously drank ice water and used cold compresses. Jessica brought me a bowl of stew and insisted I eat something. I glowered at it but took a spoonful. “Wow,” I said. “Wow. That is amazing.”

The aroma went from off-putting to intoxicating. I had another bite, then another. Meanwhile, my temperature gradually declined. Within the hour, it was at 98.7. “That,” I proclaimed, “is a magical stew.” I had it for breakfast the next morning and again for lunch.

Meanwhile, as word was getting out about my situation, friends and relatives sprang into action. My colleagues had a pastrami sandwich from Katz’s Deli in New York shipped to me. My cousin and her husband brought a dozen bagels with all the fixings. My bestie brought barbecue from Baltimore. My son came for a surprise visit and made his spicy tomato-based cabbage soup.

Whether it’s handmade or purchased, hand delivered or shipped, beef stew or bagels, an offering of food rejuvenates the psyche and, in turn, the body.

Science calls it the placebo effect. I call it hoagie voodoo. And I thank my lucky stars that it exists.

Food offered in the right spirit can act like a jolt of electricity, benefiting body and soul.