The Weird Reason Bridesmaids All Wear the Same Color at Weddings

Bridesmaids used to literally put their lives on the line. In some parts of the world, they still do. 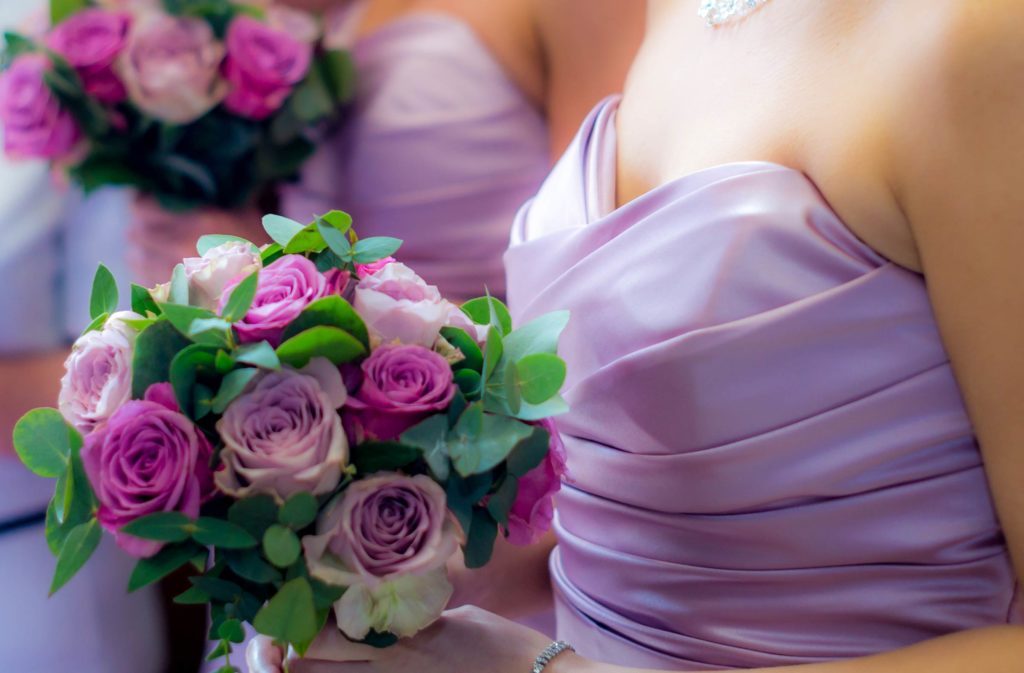 Sing along if you know the words: “Here comes the bride! All dressed in whatever color her bridesmaids are wearing in order beguile demonic spirits and highwaymen!”

Oh, you don’t know that one? It’s not super catchy, but it is—sad to say—historically accurate.

It’s kind of baffling how many modern wedding traditions actually stem from a time when brides were routinely kidnapped. Why does the bride stand on the left? So the groom’s right hand is free to draw his sword and fight off hijackers (or, as was often the case, counter-hijackers). Why is the best man called the ‘best man’? Because he’s the best man in a sword fight, which is pretty much guaranteed to happen when a rival suitor or the bride’s angry family crashes the ceremony.

Why, then, do bridesmaids all wear matching colors? It’s an old tradition that comes from a time when bridesmaids not only dressed like each other, but like the bride herself. According to Hanne Blank, author of Virgin, the Untouched History, the real reason behind this wasn’t for the group to look super fly in portraits and etchings, but to “confuse evil spirits or those who wished to harm the bride.”

There’s evidence of this custom dating back to ancient Rome and feudal China, where a bride may have been required to travel many miles to her groom’s town, making her susceptible to attack by bandits or rival suitors. With a host of bridesmaids all dressed alike, it became that much harder to target the bride on the road or at her ceremony. (Think about it like traveling with a body double—except everybody looks fabulous.)  It eventually became a legal requirement, according to certain Roman wedding customers, for ten witnesses to attend a wedding ceremony, all of them uniformed in matching colors. Similarly, brides are said to wear veils in order to mask their faces from both real and supernatural wedding crashers. Don’t miss these other fascinating wedding traditions from around the world.

While some of the spiritual associations may have faded, this custom persisted well into the Victorian era. When Queen Victoria married Prince Albert in 1840, her 12 bridesmaids wore matching white dresses to complement the Queen’s satin gown. Victoria and her entourage made such an extravagant image of grace and fertility that white dresses swiftly replaced the old tradition of nobility wearing silver on their wedding days. That’s right—thank Victoria for your white dress!

Bridesmaids in modern ceremonies are afforded a lot more freedom in how they dress (usually) but some of the historical protector powers still remain. In some Chinese ceremonies, for example, a bridesmaid may be required to deflect drinking requests for the bride, and quaff cups of rice wine on her behalf throughout dozens of individual toasts with the wedding guests. This can be so dangerous to the maid’s health that many wedding packages now include professional bridesmaids—effective friends-for-hire to drink on the bride’s behalf and fend off rude guests, among other responsibilities.

So the next time you attend a wedding, raise a glass to all the women throughout history and around the world who literally put their lives on the line so the bride could have the best day of her life—and keep evil spirits off the guest list. And if you’re part of the brave group known as the wedding party, make sure you know these 11 etiquette rules all bridesmaids should follow.