Back from war, two injured soldiers help other vets rebuild their lives.

It was November 15, 2004, a blistering 110-degree day in Bayji, Iraq, a windswept city about 120 miles north of Baghdad. Less than ten minutes earlier, Gallina had taken the wheel of a partially armored Humvee; Beatty rode shotgun, and two other soldiers sat in the back seat. Their mission was to provide security for an engineer unit combing the area for mines.

Suddenly, their vehicle launched into the air, floating in a shower of sand and smoke—they had driven over an antitank mine. The blast threw Beatty and the other two soldiers from the truck. Gallina’s helmet flew off, his skull smashing into the truck’s metal rafters. When rescue crews arrived, Gallina and Beatty were battered but alive. The other two soldiers also barely survived.

Gallina—diagnosed with mild traumatic brain injury, a wound that can erase short-term memory and cause intense mood swings and migraines—completed his tour of duty. Then he returned home to Statesville, North Carolina, where he and Beatty had met as teenagers in the National Guard. 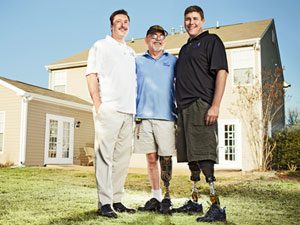 Within days of the accident, Beatty had both of his legs amputated above the knee. While recovering at home with his wife and two kids, 40 miles north of Statesville, he got a surprising call from the Iredell County Builders Association in Statesville: Some of their contractors, many of whom were vets, had volunteered to build the local hero a new wheelchair-accessible house with a custom shower and wide-frame doors. Beatty volunteered to team up with the builders and ended up working on many of the projects himself. “Building the house became one of my goals to prove that I could still take care of myself and my family,” says Beatty, now 34.

As construction on the house wound down, Beatty, determined to provide other wounded vets with customized homes, reached out to his buddy Gallina, now 33, with an idea: to create a nonprofit organization using volunteers to remodel existing houses or build new ones for disabled vets. “I told [Gallina] that we should make what happened to me a reality for others,” says Beatty. The old friends pooled their modest veteran pensions to create Purple Heart Homes. The group persuaded banks like Wells Fargo and Maryland-based financial group NewDayUSA to donate foreclosed homes and inspired some contractors to offer their services for free.

Former aviation specialist Kevin Smith was one of the first vets to get help, after he found out about Purple Heart Homes through a chance meeting with Gallina’s mother. He had returned injured from Vietnam in 1978 and often used a wheelchair. Navigating from his front door to the driveway was nearly impossible. “There were steps, but there was no railing, so I couldn’t get into and out of the house very easily,” says Smith. The Purple Heart Homes crew installed a ramp that allows Smith to roll right out the door.

David Morrell, also a Vietnam vet, returned from war with type 2 diabetes, which led to the amputation of his left leg. Gallina and Beatty met Morrell at a local coffee shop that serves as a gathering place for vets. “They really surprised me when they said they could fix up my house,” he says. Purple Heart Homes eventually removed carpet, widened hallways, and added ramps. Morrell thanked them by joining the group as a fund-raiser.

So far, Beatty and Gallina have overseen the completion of ten projects in North Carolina, Connecticut, Georgia, Ohio, Tennessee, and New York. “It’s a lot more than bricks and mortar that we are giving people,” says Beatty. “We can help give them back their dignity.”