We asked our Facebook fans. ≫ I pay more attention to the people around me when I am in a

≫ I pay more attention to the people around me when I am in a crowd.
Jane Carder


≫ I honor military, police, firefighters, and other service people and try to remember to say thank you when I see them.
Andrea Pandeloglou Smolin


≫ I was 14 and could not wrap my mind around the tragedy. Years later, we went to see Flight 93 in theaters, and I finally cried.
Stephani Blair


≫ I had been to the Twin Towers in 1984, so I often think it could have been that day I was there. I moved closer to my family.
Dorothy Elizabeth Pine Mets


≫ My partner and I were on duty as paramedics. We watched a man pass out hundreds of U.S. flags to drivers on the street. I saw something I had never before seen personified: pride, love of country, solidarity, determination. Tears ran down my face. I knew America would not only survive but recover, overcome, and thrive. I’d always loved my country, but that day I fell in love.
Tammy R. Musgrove


≫ It helped me meet my husband. Partly because of 9/11, he was inspired to join the Army. During his first deployment to Iraq in 2006, we met online. We married in 2007.
Angela Metcalf, Tucson, Arizona


≫ My eyes were opened to the cruel, scary world that existed outside the safety of my small town that day. Being in only the sixth grade, I felt like a huge chunk of my innocence was taken by the terrorists.
Miranda Reid, Ackerman, Mississippi


≫ It was a reminder that we should not wait to say “I love you” to our loved ones.
Pamela Madrid, Manila, Philippines


≫ It opened my eyes to the fact that America is not invincible, which was a very scary feeling.
Kate Nessler, Cincinnati, Ohio


≫ I found myself examining what freedom really means to me. I realized we are not one world, as much as we would like to be.
Stephen Greg Legat


≫ I became more world-aware instead of self-aware. I’ve lost a lot of my self-entitlement.
Annamarie Cardinal


≫ I have learned that Muslims in other countries were also horrified and grieved on 9/11. It is past time we understood that fact.
Susan Diane Cain

What Does 9/11 Have to Do with Going to College 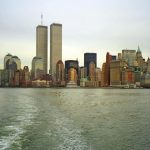