How Many Ducks Do You See? Try to Solve the Viral Riddle 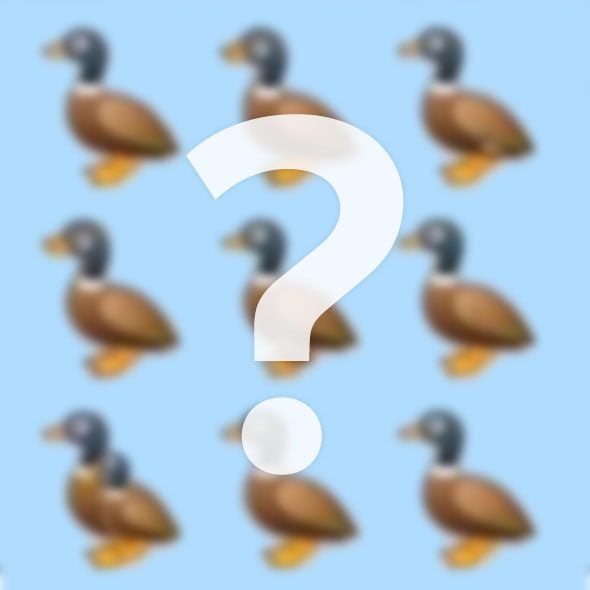 This riddle is a lot tougher than it looks.

The question seems simple enough: How many ducks do you see? And yet, this visual riddle is a lot tougher than it looks.

In fact, it has stumped so many on social media that the riddle has now gone viral. People on platforms such as Instagram and Facebook are often amazed at just how wrong their initial guesses are—which is why they’re so eager to learn how to arrive at the right answer.

So, just how many ducks are there? Read on to find out.

RELATED: If Teresa’s Daughter Is My Daughter’s Mother: Answer to the Viral Riddle

How many ducks do you see?

The riddle relies on this picture:

At first, the image appears to contain little cartoon ducks arranged in a 3×3 grid. As with most riddles, this setup is purposely misleading. Those who scan the image quickly arrive at the (incorrect) answer of 9. Only the most eagle-eyed of puzzlers will spot how many ducks are there.

The “How many ducks do you see?” answer explained

In fact, there are nearly twice as many ducks as those that first meet the eye. Let’s examine each of the seeming nine, moving across left to right and top to bottom to find just how many ducks are there.

The first duck is just that: one duck. But look at the next one, especially around its head and beak. How many ducks do you see now? There’s a second one, staggered just behind the first. So, in the first two icons, we’re up to three ducks.

The third duck is similarly tricky. There’s a smaller duck hidden near its wing and feet. In the next row, the fourth duck contains a second, staggered duck. And the fifth has another small duck hidden near its feet. Now we’re up to nine ducks—and we’re barely halfway through!

The sixth duck icon is up for debate. Some see only one duck. Others notice a marking on its wing that doesn’t appear on any of the other icons and interpret this as an additional duck. We’ll call it two since this leads to the most accepted answer.

In the final row, we have three ducks in the seventh icon. (The extra two are pretty easy to spot.) And each of the last two icons contains just one duck. So, we’re now up to 16 (or 15, if you don’t count the supposed second one in the sixth icon).

And there you have it: 16 ducks. Did you enjoy this visual riddle? Then make sure to check out our other visual brain teasers and puzzles.

Can You Find the Hidden Objects in These Pictures?

Egg Riddle: If I Had 4 Eggs: Try to Solve the Viral Riddle