How Much Do 1.23 Billion Chicken Wings Weigh? And Other Things You Don’t Know About Our Favorite Super Bowl Snack

Chicken wings and football, a match made in…Buffalo? 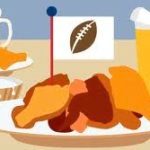 Chicken wings and football, a match made in…Buffalo?

Yep. And that’s not just the theory of resiliently proud Bills fans, it’s the truth according to the U.S. Department of Agriculture.

It seems the very first Buffalo-style chicken wing was created in 1964 at the Anchor Bar in–where else?– Buffalo. A mere quarter-century or so later, when the Bills went to the Super Bowl a record four times in a row (and lost all four games), the hometown treat got a ton of publicity and soon became a tasty staple of America’s favorite pastime.

(Bar owners in the ’80s had begun to realize that chicken wings were cheap to produce and sell, good for groups to share and caused beer sales to skyrocket, but it was the Bills’ Super Bowl run launched the little critters into the snack stratosphere.)

Now, chicken wings are so popular we can track their story in numbers:

• 23 percent of those who watch the game will consume wings.

• 57 percent of Americans prefer to dip their wings in ranch dressing, while only 37 percent choose bleu cheese.

• New York Giants fans and those from mid-Atlantic states are 24 percent more likely to order wings than the national average, while New England Patriots fans are six percent less likely.

• Women (37 percent) are more likely to eat celery with their wings than men (28 percent).

• If the 1.23 billion projected wings for the Feb. 3 Super Bowl were laid end to end, they would stretch from Candlestick Park in San Francisco to M&T Bank Stadium in Baltimore…27 times.

Take a look at the best places to nosh on wings, according to attendees of the 2012 National Buffalo Wing Festival, which draws restaurants nationwide.