This Is How Much Nicotine Is in One Cigarette

Whether you're looking to quit, trying to substitute alternative products, or are just curious, it's important to know how much nicotine is in one cigarette. 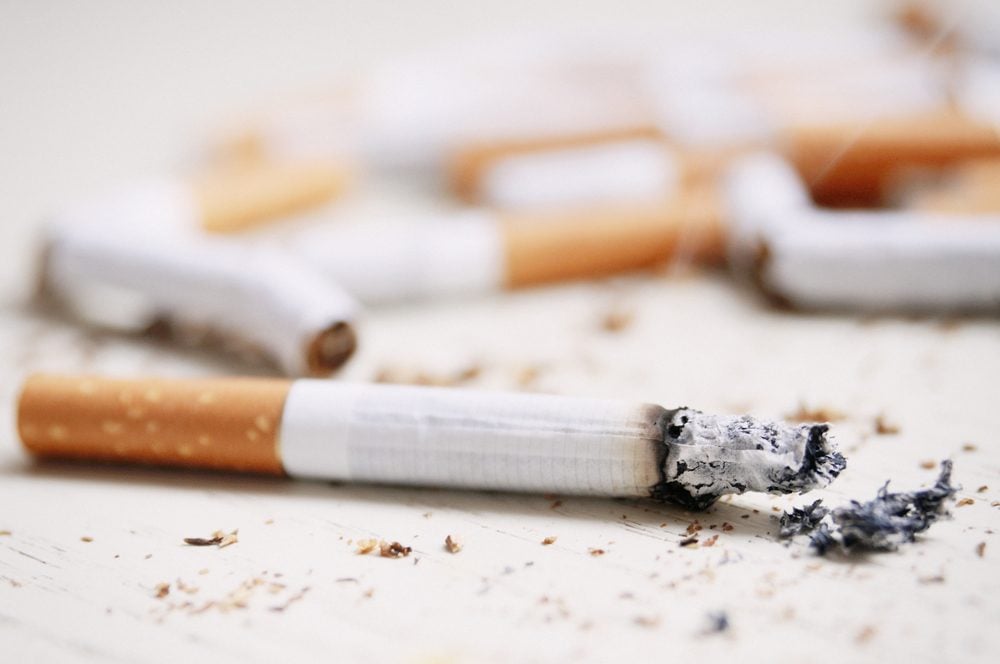 Cigarettes contain more than 7,000 chemicals, but the one smokers are seeking for that hit is nicotine. Nicotine, which is made naturally by tobacco plants, but can also be synthetically produced, can cause a chemical addiction in people who use tobacco products, such as cigarettes, or nicotine-infused products, such as cartridges for electronic cigarettes. E-cigarettes are often heralded as a great alternative for people seeking to quit smoking, but the harm e-cigarettes can do to your body may be silent.

“One cigarette contains about one milligram of nicotine,” says Jason Reed, PharmD, medication advocate and founder of bestrxforsavings.com. This has been found to be consistent across types of cigarettes and various filters, he says.

Even denicotinized cigarettes, which typically have just 0.05 milligrams of nicotine per cigarette, occupy 26 percent of the brain’s nicotine receptors. Not only is this amount of nicotine addictive, but research shows nicotine may also raise blood sugar levels.

By comparison, “nicotine replacement products, such as gum, contain two milligrams or four milligrams, depending on the strength of gum you choose,” Reed says. But research shows people do not always get the same boost from the gum as they do from the cigarettes themselves.

A few other factors can influence how much nicotine you get from each cigarette or nicotine product. One study found that the way you smoke a cigarette, such as how long your puffs are, can impact nicotine levels. What’s more, women are less likely to get as much nicotine because they frequently end a cigarette before it’s complete and have a shallower inhale. For people ready to kick the habit, these are the 23 best ways to quit smoking.

How to Clean Your Stove Top: Tips for Getting Rid of Grease and Spatter

50 Cat Facts That Are Purr-fectly Fascinating
Earth Day Quiz: How Well Do You Know Our Earth?