Tipping 101: How Much to Tip in Every Situation 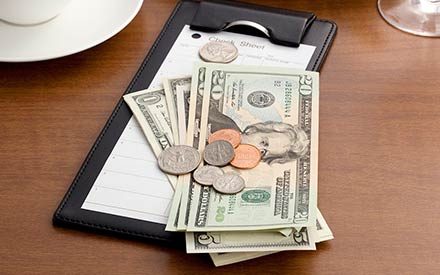 Finally, your "who, when, and how much" to tip questions, answered.

How much to tip?

Tipping is arguably the most stressful part of eating out (besides actually choosing a restaurant). There are no set rules to tell you exactly how much to tip your server, so you’re left guessing how to convert service quality into cash. Plus, figuring out tips for other services, like travel or beauty treatments, is just as confusing. Even more confusing? Figuring out tipping in other countries while you’re traveling.

Luckily, we got you covered. We’ve compiled the best tips on tipping from experienced etiquette experts. Here’s the low-down on who, when, and how much to tip.

Tipping for dining and take-out:

How much to tip wait staff: 10 percent for mediocre service; 15 percent for good service; 20 percent or more for excellent service, according to Maryanne Parker, owner of Manor of Manners, a company for business, social, and youth etiquette in San Diego.

How much to tip a bartender: $2 per drink (minimum) at high volume bars, says Parker; 10-15 percent of the bar bill at a cocktail bar, advises Jodi R. R. Smith of Mannersmith Etiquette Consulting.

How much to tip on take-out (whoever prepares your to-go order): No tip necessary, especially for counter service “like a doughnut shop or deli,” says Smith. If it’s a complicated or large order, Smith says tipping 5 percent is a lovely gesture.

How much to tip pizza delivery: 10-15 percent or $2-$5 for the person who delivers pizza or other food, says Parker; 20 percent if the weather is bad; Parker also advises tipping $2-$3 if someone helps you with groceries outside the store and increasing this tip for home grocery deliveries to match your regular food delivery tip.

How much to tip Doordash: Smith says 10-15 percent is standard but notes that it depends on time and effort. If you have a large order, you should tip more.

How much to tip Instacart: Similar to Doordash, Smith says 10-15 percent is standard. However, if it’s a large order that took a lot of effort to get together and complete, you should tip more.

How much to tip a barista: $1 per coffee, advises April Masini, relationship and etiquette expert; “For a coffee drink that requires them to make an artistic leaf in your cappuccino, with hot milk? Two dollars. If you have a complicated order, two dollars,” says Masini.

How much to tip a hotel housekeeper: $2-$5 per night in a hotel, says Parker and Smith. The tip should be left “daily near the pillow on the unmade bed,” as “housekeepers work irregular schedules” and “if you are staying a week and tip on the final day, someone who just came on shift could be benefiting and the person who had been cleaning your room for six days in a row would receive nothing,” says Smith. It’s also helpful to leave the note with the cash so the housekeeper knows it’s a tip, and make sure to read up fully on how much you should tip a hotel’s housekeeping staff.

How much to tip a home housekeeper: $5-$10 for a few hours of light housekeeping in studio apartments, says Masini. “If you have a large home, and the work took longer, double that tip,” Masini advises. “If you have someone regularly, you can tip a little less, and give them a Christmas present once a year that shows your gratitude,” adds Masini. It is not necessary to tip housekeepers who work for themselves.

How much to tip valet parking: $2-$5 upfront, advises Parker. If you have a “nicer car” a bigger tip will ensure that your car is well cared for, she adds.

How much to tip a doorman: At least $5 for hailing a cab, suggests Smith. However, depending on how much work they do for you and whether it is raining, you can tip your doorman anywhere between $5-$20. If you live in an apartment building with the same doorman year-round, Parker advises giving an annual $75-$100 tip around the holidays.

How much to tip a coatroom attendant: $3-$5 per coat, Smith suggests; more if you also check hats, umbrellas, or bags.

Tipping at a salon/spa:

How much to tip hairdresser/barber: 20 percent is a standard tip for your hairstylist or barber and $5-10 is appropriate for the assistant if they give you a really good hair wash or scalp massage, says Smith. It is also good etiquette to tip the salon owner “the equivalent of one visit as your end-of-year gift,” she advises.

How much to tip manicurist: 18-20 percent, advises Smith.

How much to tip spa services: 20 percent, advises Masini.

How much to tip a massage therapist: 20 percent, advises Smith. However, you can tip more if you are pleased with your service.

Tipping for other common services:

How much to tip an Uber driver: 15-20 percent for rides through an app, informs Smith.

How much to tip a taxi driver: 15 percent is standard for taxis, says Parker.

How much to tip movers: Smith says to tip $20 per person per day with movers, and to bump the tip up to $50 for a supervisor. Smith also advises provided cold drinks and food for movers. Moving into a new house soon? Check out these important things to do when moving into a new home.

How much to tip a tattoo artist: 20 percent, advises Smith. However, if you’re pleased with the outcome, you can tip more.

How much to tip dog groomer: 10-15 percent, advises Smith.

Other tips on tipping:

Guide to Tipping in Other Countries

Everything Worth Buying This Week: From Mineral Sunscreen to a Tory Burch Tote
25 Perfect Holiday Hostess Gifts You Can Order on Amazon