The One Thing to Say When You’ve Made Someone Angry

What to do and how to apologize. 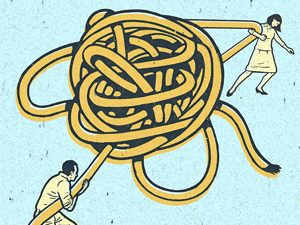 I was running late. My wife, Eleanor, and I had agreed to meet at the restaurant at seven o’clock, and it was already half past. I had a good excuse: A client meeting had run over, and I’d wasted no time getting to the dinner as quickly as possible.

When I arrived at the restaurant, I apologized and told my wife I didn’t mean to be late.

She answered, “You never mean to be late.” Uh-oh, she was mad.

“Sorry,” I retorted. “It was unavoidable.” I told her about the client meeting. Not only did my explanation not soothe her, it seemed to make things worse. And that started to make me angry.

Several weeks later, when I described the situation to a friend who is a professor of family therapy, Ken Hardy, he smiled.

“You made a classic mistake,” he told me. “You’re stuck in your perspective,” he said. “You didn’t mean to be late. But that’s not the point. The point—and what’s important in your communication—is how your lateness affected Eleanor.”

In other words, I was focused on my intention, while Eleanor was focused on the consequences. She and I were having two different conversations. In the end, we both felt unacknowledged, misunderstood, and angry.

The more I thought about what Ken had said, the more I recognized that this battle—intention vs. consequences—was the root cause of so much interpersonal discord.

As it turns out, it’s not the thought that counts or even the action that counts. That’s because the other person doesn’t experience your thought or your action. He or she experiences the consequences of your action.

When you’ve done something that upsets someone—no matter who’s right—always start the conversation by acknowledging how your actions affected the other person. Save the discussion about your intentions for later. Much later. Maybe never. Because in the end, your intentions don’t matter much.

What if you don’t think the other person is justified in feeling the way he or she does? It doesn’t matter. You’re striving for understanding, not for agreement.

What I should have said to Eleanor is “I see that you’re angry. I’m sorry you’ve been waiting for me for 30 minutes. And it’s not the first time. It must seem that I think being with a client gives me permission to be late. That’s got to be frustrating.”

What I have found is that once I’ve expressed my understanding of the consequences, my need to justify my intentions dissipates.

That’s because the reason I’m explaining my intentions is to repair the relationship. But I’ve already accomplished that by empathizing with her experience.

After talking to Eleanor and really understanding her experience of the consequences of my lateness, our relationship has gotten better and somehow I’ve managed to be on time a lot more frequently.

How do you apologize?

How to Clean Your Stove Top: Tips for Getting Rid of Grease and Spatter
9 Ways to Keep Paranoia from Destroying Your Relationships
50 Everyday Habits That Can Make You Look Younger