How to Catch a Liar

Pamela Meyer, the nation's best-known expert on lying, explains how to sniff out the truth in a world of lies. 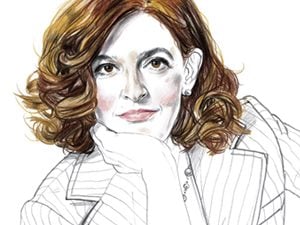 Agata Marszalek for Reader's DigestWE’VE GOT A DECEPTION EPIDEMIC, says certified fraud examiner Pamela Meyer. She is the CEO of Calibrate, a Washington, DC, company that trains people in the legal, insurance, financial, and college admissions fields in the art of lie spotting. She’s got pockets full of secrets for identifying—and understanding—fibbers. Here she reveals some of them.

RD: Why do we often fail to recognize a liar?

PM: We think liars fidget all the time, but many freeze their upper bodies because they’re busy concentrating on their lies. We also think that a liar won’t look you in the eye, but he makes eye contact more than most people do because he’s overcompensating. However, one indicator isn’t proof that someone is lying—it’s important to look for a cluster of signals.

A liar often smiles subtly while telling a lie; it’s an unconscious expression of his delight in getting away with a whopper. There’s a famous photo in which Adolf Hitler was smiling while talking to British Prime Minister Neville Chamberlain at the meeting where Hitler concealed that he’d already mobilized his army to attack Poland. Other signs are when a person makes big changes in posture, like slumping in his chair or looking down. There are also verbal signals. Someone may repeat a question to stall for time. A liar may swear on the Bible or his mother’s grave that he didn’t do something; it’s what I call overconvincing or overpersuading. A person giving too much detail in a story is another example.

You’ve also said that a liar doesn’t tell a story in the same way that an honest person does.

A liar frequently cuts his ending short and doesn’t express emotion while telling his story. A person telling the truth isn’t likely to end his story abruptly, and he tends to express a lot of emotion at the end of it. He also doesn’t usually tell a story in chronological order; he jumps around a little, according to what is most prominent in his memory.

Lying is so common in our everyday lives. Research shows spouses lie to each other in one out of every ten interactions. Why do we lie so much?

A large portion of lies are white lies: “No, honey, you don’t look fat in that.” We also fib because we want to avoid uncomfortable moments, so we say things like “I’ll call you,” when we don’t plan to, or “It’s not you, it’s me.” But often, a liar doesn’t lie outright; he just avoids answering questions. Or he minimizes—that is, frames what he’s being asked about as less significant than it may have been. So a spouse who’s minimizing might say, “I did take Susie for a drink last night, but it was nothing; we had to go over expense reports.”

Is minimizing always a lie?

No. It can be one indicator of lying, but sometimes it’s necessary to clarify a misunderstanding.

Who do you think is the biggest liar in recent history?

Bernie Madoff, because so many people were taken in by him and the scale of his crimes was so significant. He was questioned at least four times in front of the U.S. Securities and Exchange Commission without being caught, so it tells you not only something about human nature but also how willing people were to believe what he was telling them.

Yes, you’ve said that we’re all hungry for certain things in an interaction and by figuring out what we’re hungry for, we can avoid being deceived. Can you explain?

I’m talking about blind spots. If you’re in financial trouble, you may be more susceptible to a get-rich-quick scheme. Or if you’ve been single for a while and someone tells you how gorgeous you are, you might be more likely to fall for him. There’s nothing wrong with wanting to hear these things—but the intensity of your desire to believe it could cause you to read a situation incorrectly. After a breakup or after leaving a job, people often say, “I knew from the start it wouldn’t work.” They ignore their misgivings because they want so much to be in that relationship.

So how can we go about creating more honesty in our lives?

It’s about developing a network of trust around you. Study after study shows that people are much less likely to lie to a person they consider to be honest. You can open a conversation by saying, “It’s really important to me that we’re having an honest communication,” or by sharing something personal. Or you can close your talk by asking, “Is there anything else you want to tell me?”

You train people to detect fraud. Who makes a good lie detector?

Good listeners who are truly curious about human behavior. A good lie detector doesn’t jump to conclusions but tries to understand the person across the table, her personality, and her motivations. Your goal as a lie spotter isn’t to point the finger and say, “You’re lying”—your goal is to get to the truth. You want to convince the person that you’re pursuing facts and that you understand why she did what she did. People get defensive when they feel that the person interviewing them is acting morally superior to them, because we all like to think we’re honest.

Are you able to tell when your own husband, child, or friend is lying?

[Laughs] I can’t because I love them, so I don’t ever see them as liars. I’m much better with everyone else.

Tell us about a time when you caught one of them in a lie.

I have a five-year-old daughter, and she’s not supposed to have candy after she brushes her teeth. I put her to bed one night, and she kept urging me to go into the bathroom. I did, and when I looked in on her afterward, I discovered she’d hidden a candy cane under her pillow.

How did you find out?

I caught her unwrapping it!

25 Best Valentine’s Day Flowers to Wow the People You Love
Are Crossed Arms Rude? 8 Secrets Your Body Language Reveals About You
5 Types of Toxic Co-Workers and How to Deal with Them