Repeat after us: "I before E, except after W"

It’s a Tuesday in the mid-1800s, and a British linguist bursts into his colleague’s office. “I’ve got it, Bertrand!” he exclaims. “The perfect spelling mnemonic!”

The linguist skips up to his colleague’s blackboard, palms a piece of chalk, and writes: “I before E, except after C — or when sounded like A as in ‘neighbor’ and ‘weigh.’” 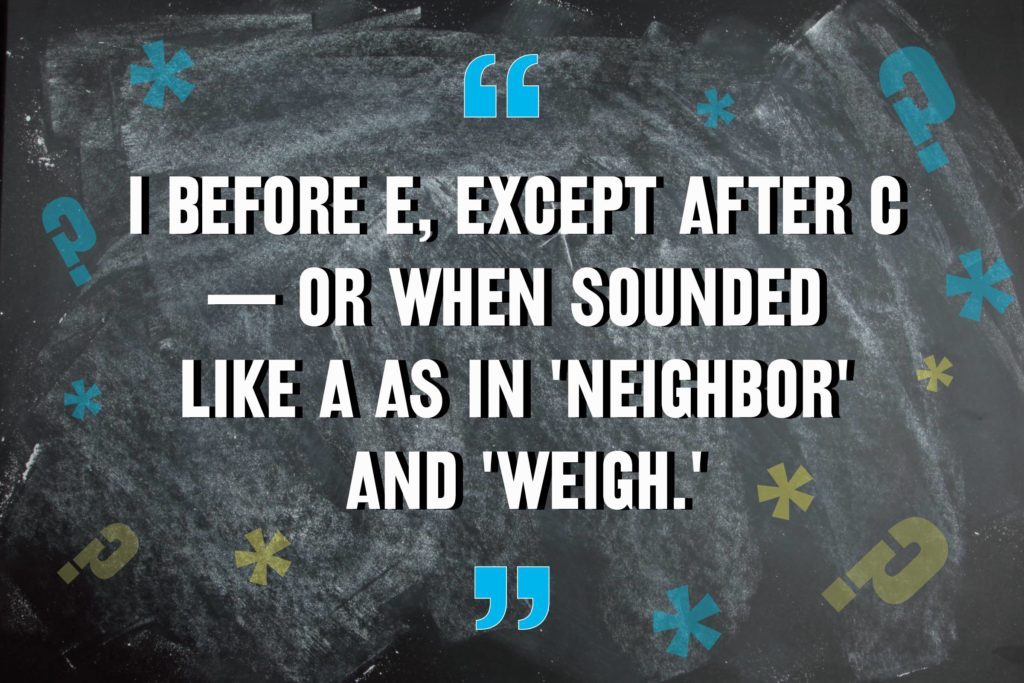 “I love it!” Bertrand bellows after reading the rhyme several times. “Never again shall I mistake the spellings of receive, believe, or piecemeal thanks to your scientific solution! It’s—Wait a tick,” Bertrand freezes in his tracks. “What about science, scientific, and the like? Do those words not break the rule?”

“Well, they do,” the linguist concedes, “but such words are really just weird exceptions to th—”

“Weird?! Another rule-breaker!! Good catch, old bean.” Bertrand paces the room, twirling his beard in thought. “And what of the words height, glacier, and species?”

“What if one were to write of, say, an icier, dicier, spicier zeitgeist?” 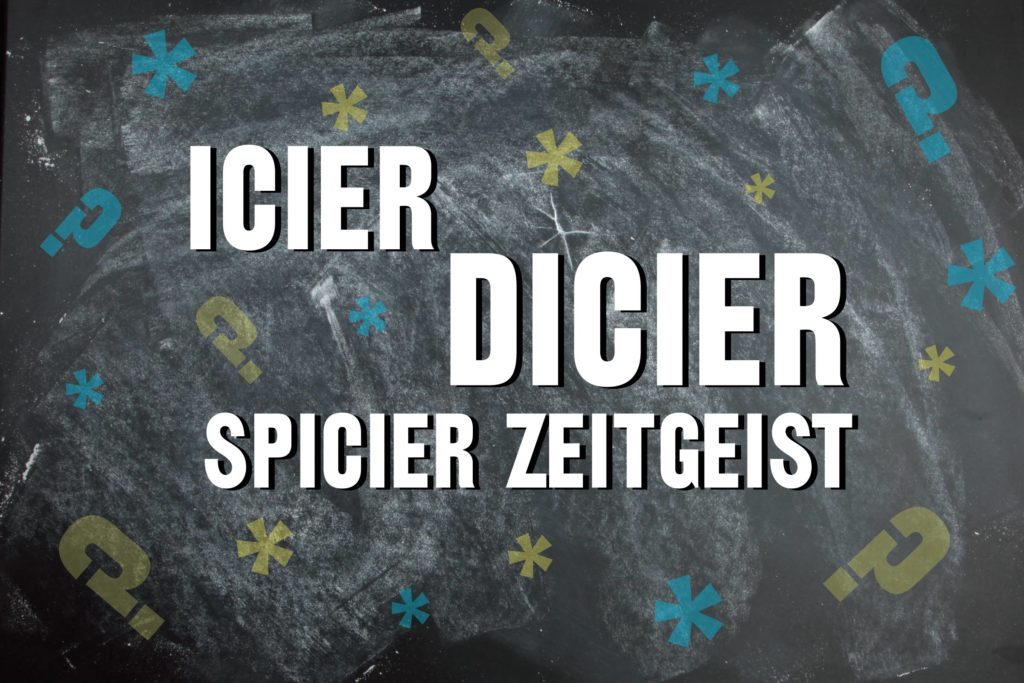 “Or a veiny, beige, neighing geisha? A leisurely foreign sovereign seized by caffeine? A—”

“Yes! To rein a sleigh aweigh with seismic atheist keisters!”

“A forfeited heirloom for a feisty veiled poltergeist…”

You don’t need to be a linguist to realize the world’s most famous English rule is built over a minefield of exceptions. “I before E, except after C” first entered textbooks around 1855, and has enjoyed a prolific run ever since for its poetic simplicity; any kid can learn it, and any adult can use it—the only problem is, it’s almost always wrong. (Here are 10 other strict grammar rules you can safely ignore.)

Nathan Cunningham, a PhD student studying statistics in the University of Warwick, suspected as much when he heard the TV program QI suggest there are more than 900 English words that disobey the classic rhyme—significantly more exceptions from the rule than words that adhere to it. Cunningham wanted to know for sure. So, using a simple data-crunching program, he analyzed more than 350,000 common English words to find the actual frequency of “ie” versus “ei” pairs, and what letter the vowels happened to follow. The results were (to misuse a popular ei-word) inconceivable.

[pullquote] Cunningham found that, once again, “i” came before “e” nearly 75% of the time—even after “c”[/pullquote] 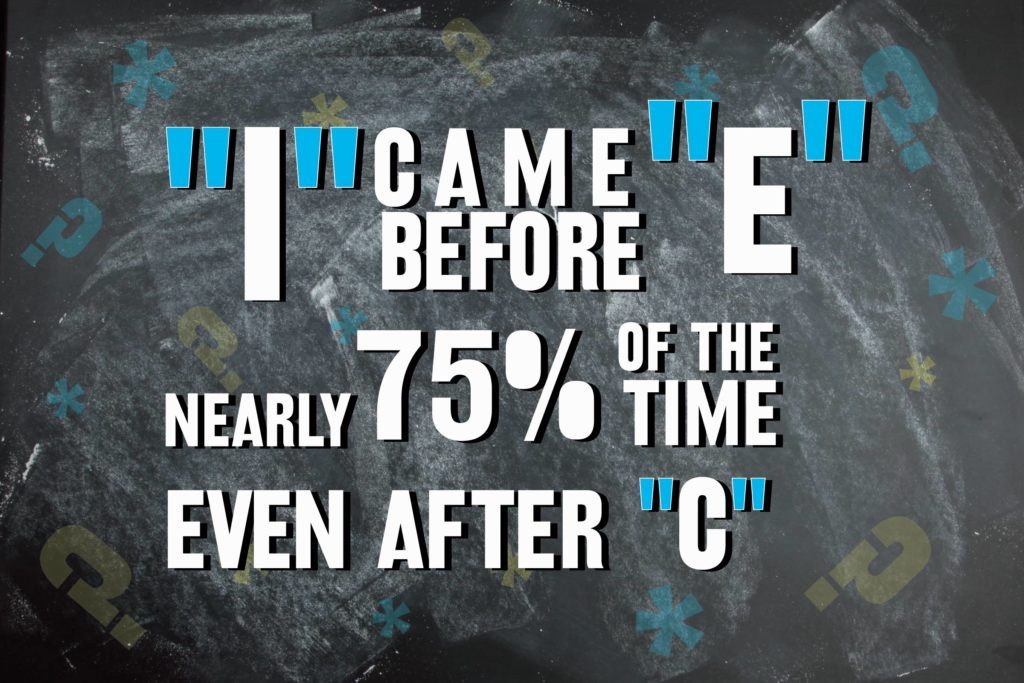 Things started off well for the old mnemonic: Cunningham found that, out of the hundreds of thousands of words he studied, “i” did indeed come before “e” roughly 75% of the time. “If you’re struggling to order an ‘ei’/‘ie’ pair in a word,” Cunningham writes, “there’s an approximately three to one chance that the ‘i’ will go first.” So far so good. (These are the little grammar rules to follow to sound smarter.)

“Except after C” is where everything falls apart. Comparing his list for words containing “cie” and “cei,” Cunningham found that, once again, “i” came before “e” nearly 75% of the time—even after “c”. Words like receive and deceit, though written and spoken in high-frequency, actually proved in the minority; for every one of them, there were three times as many scientists, fanciers, and glaciers. Per Cunningham: “This addendum to the rule is completely useless. You still have roughly three to one odds that the ‘i’ goes first.” 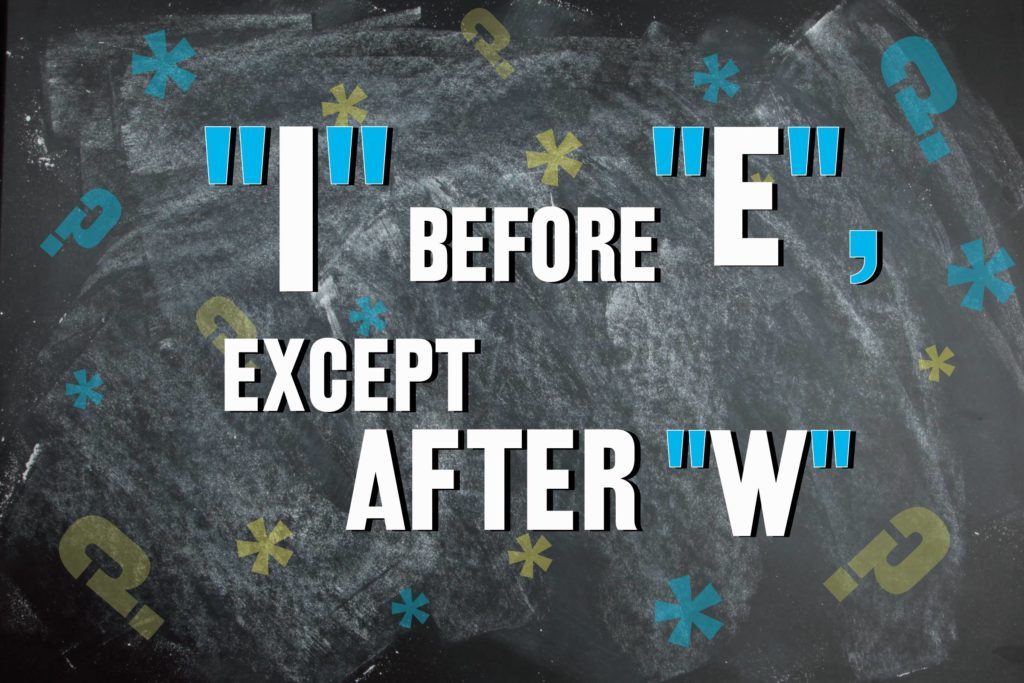 So, while the numbers say “except after c” should be expelled from the classroom, does any other preceding letter give “ei” a proven advantage over “ie”? Cunningham decided to test every other letter in the alphabet to find out. According to his findings, here’s the new rhyme we should teach our kids: “I before E, except after W.” Numbering just shy of 200 words, uses of “wei” (mostly from variations on weight, weightiest, aweigh, etc.) were 70% likelier to appear than “wie” (in words like dewiest and chewiest). No other letter, save for words that begin with “ei” like either and eighty, held to the rule with such significant frequency. What would a linguist say about all this?