On July 16, 2016, while my family and I were in Coatesville, Pennsylvania, where I grew up and spent most of my life, celebrating our son Justin’s 30th birthday, Valerie Castile was losing her son (Philando Castile) during a routine traffic stop in Falcon Heights, Minnesota.

There are multiple experiences that stand out to me, like Sandra Bland, Willie McCoy, and so many more, but none have touched my heart like Philando, who was 32 years old when he died. On that day, Philando became my son, too. I experienced the heartache and felt extreme sorrow, anger, and disappointment because police officers are supposed to serve and protect. Philando’s last words before he took his last breath were, “I wasn’t reaching!” After hearing that, I knew that this was the final straw, and there had to be a better way.

BIPOC and the police

Often, a traffic stop is the first interaction that citizens have with law enforcement. As such, it’s the most crucial in shaping the mindset and reaction that a motorist has with a police officer, and it is extremely important that our young people of color are taught the proper procedures of a traffic stop. My husband always says that we teach our kids how to drive a car, but we don’t teach them how to handle a traffic stop. Although Black parents have to have “the talk” with their teens, the actual experience itself can turn deadly with a sudden movement as it did with Philando. If we teach teen motorists proactive compliance, it will reduce the likelihood of escalated traffic stops. Find out how having Black children changed one woman’s view on racism.

We bought our son Justin a car when he obtained his driver’s license when he was a teenager, and we taught him that if he were ever pulled over by police, he had to place his hands on the steering wheel, say “yes, sir” or “yes, ma’am,” and ask permission to reach for his license. We also told him that he could never ride “four deep” (or four or more people) in a car because police would pull him over. We told him that he could never talk back to police officers and that he had to remain respectful. Justin realized that his White friends did not have to follow the same rules that he had to endure simply to have the privilege of driving in America. He soon found out later when he joined the military and was traveling from Wichita Falls, Texas to Dallas on a back road with three other soldiers that everything we taught him would come to fruition. The sheer terror he felt when being pulled over is the same terror all men of color feel when being pulled over because every movement, every word, and every action could mean life or death.

I wanted to create something that could have helped Philando and that could still help the Black men who continue to get pulled over in traffic stops on a daily basis. That includes my son, Justin, now a 34-year-old and living in Brooklyn. He is an amazing photographer and has had his work featured in Times Square, on the BET Awards Show, and other great outlets. Justin was also a medic in Afghanistan and sacrificed for this country; after returning from Afghanistan, he now suffers from PTSD. The creative side of him, however, is the result of the trauma he experienced, and now is a beautiful display of art for all to see.

The mother of invention is necessity 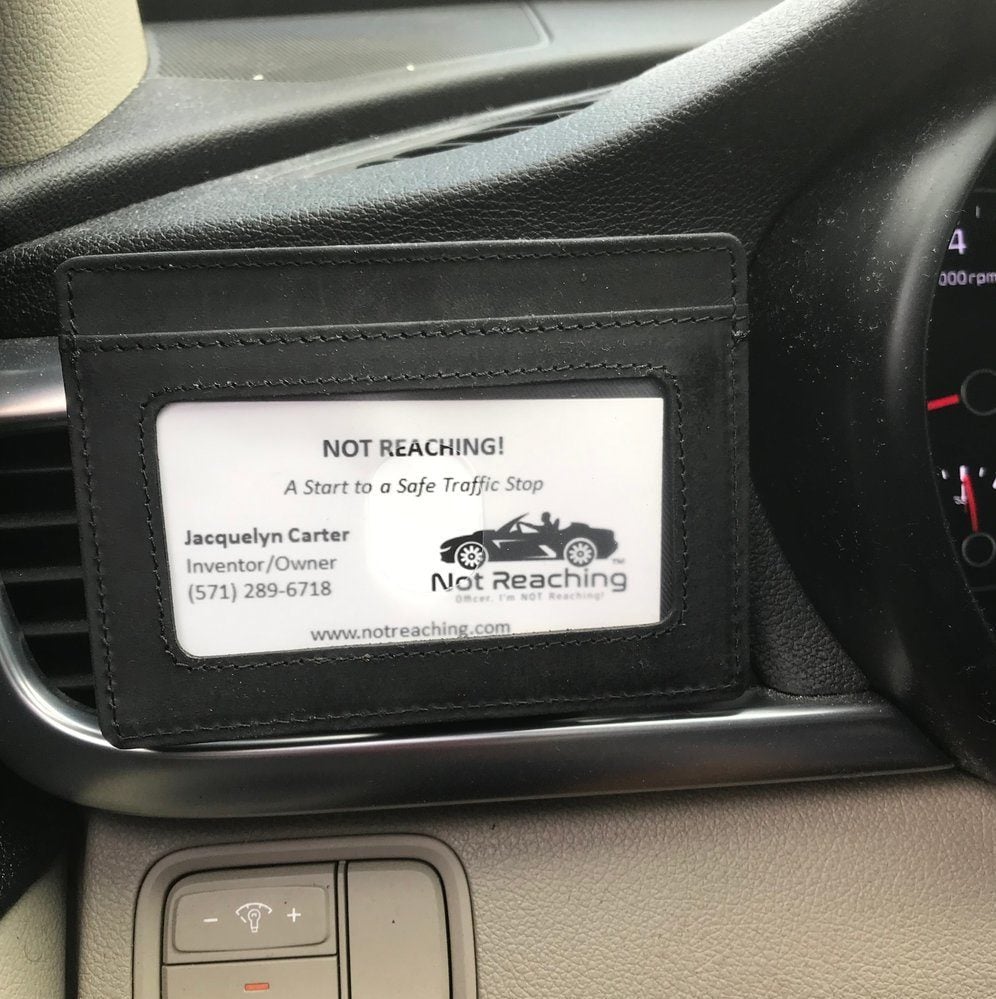 After Philando’s death, I spoke with police officers that I knew and asked the same question: “What is it that makes you nervous during traffic stops?” Every police officer said, “The reaching and movement.” I knew that we had to create a solution to eliminate all movement and reaching on the part of the driver. My husband, Wayne, and I created a few different prototypes and began determining where it should be placed. We had a Velcro model that we placed on the glove box, and then we moved a plastic casing on the sun visor. Then we went back to the drawing board and asked police officers where such a device should be located, and we determined that the product was most visible and accessible on the driver side air vent. It took us about a month or so to design a prototype for Not Reaching, a transparent pouch to hold one’s license and registration in plain view. Learn about 14 Black inventors who made your life easier.

Justin has been pulled over several times since his time in the service in Afghanistan, and he now uses the Not Reaching pouch. He says that police officers are always surprised to see the pouch, and they love it. My husband Wayne has been pulled over several times, prior to Not Reaching and after Not Reaching, and he says the difference is evident. Wayne says that police begin a dialogue on the importance of the Not Reaching pouch and how it is a help to both the officer and the driver. Police officers definitely understand the significance of it—it is a proven tool for proactive compliance and a start to a safe traffic stop. In addition to being stopped more frequently, there are more everyday acts of racism that don’t get talked about enough.

What It's Like to Be a Black Police Officer Right Now

Small Ways You Can Fight Racism Every Day