How I Learned to Love the Real Me

Her distinctive nose cast a shadow on her confidence until wisdom intervened. 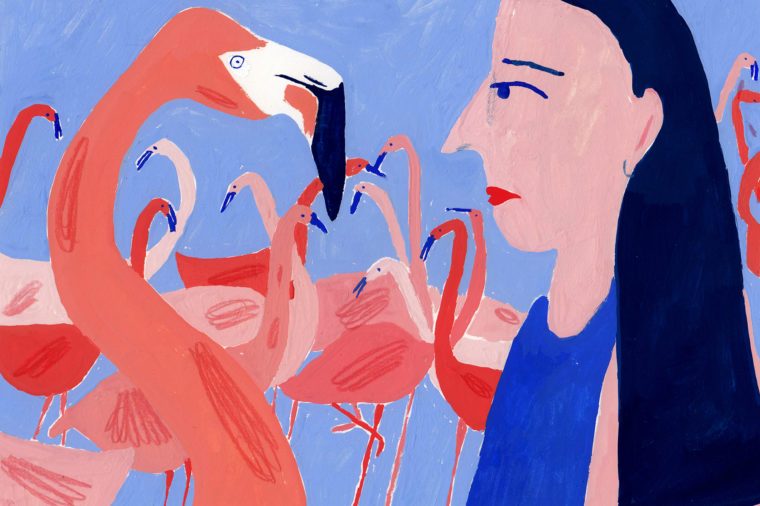 I’m scanning old photographs, trying to figure out the exact moment when my nose, the exaggeratedly pointy, slightly asymmetrical bane of my existence, first sprouted.

It’s summer vacation after seventh grade, and I’m at a zoo with my family. We’re hiding in the shade when we spot a group of flamingos standing around a pond. “Hey, look!” my brother shouts at me while pointing at the pink crowd. “Your real family!” I glance down at my skinny knees before figuring out he thinks our resemblance lies elsewhere. My parents ask me to stand in front of my newfound relatives and direct me to bend my legs into a similar pose. “Now turn your face to the side,” my mom says. Click.

I’m 14. I’m having a Caesar salad and iced tea for lunch at my aunt’s house. “Why don’t you have a boyfriend yet?” she asks, as if this were a choice of mine. “We were talking about you the other day and saying how pretty you are, Patricia,” she tells me in between sips of her iced tea. “But we all agreed that if you just took off a little bit of length from that nose, you could be beautiful.”

It’s 2005 and the performer Ashlee Simpson has just gotten a fantastic nose job. I look at her before-and-after pictures, and I’m convinced I need to get one for myself. During a phone call with my mom, I tell her I’m determined to fix my nose. “I thought you had grown out of this by now,” she says, disapproval in her voice. When we still lived under the same roof, I would beg her to take me to see a doctor. My mother—who barely uses makeup, has a naturally straight smile, and has never bought an antiaging cream in her life—would laugh and tell me there was an easier way to fix my predicament. “If you believe you’re beautiful, people will see you that way,” she would say—as if it were that simple, as if it were magic.

I must have worn her down because she finally agrees to book me an appointment. A man in a white coat with a tersely smooth face and an unnatural hue of dark hair is shoving a magnifying lens up my nostrils. “Do you have difficulty breathing?” he asks. “Because you have quite the deviated septum.” He prods and turns my head up and down and from one side to another with his gloved hands. The nurse takes a photo of my face looking straight ahead; another one in profile, my least favorite angle. The doctor asks my mother and me to join him in his office, where he downloads the images and begins to play around with my nose’s appearance: slimming it down, pinching the tip, erasing a bump I had failed to notice before. “You have a very nice, thin nose,” he says, even though he’s deleting every trace of it in front of me. “The problem is that it’s too big, so we have to work a lot on bringing it down to a better size.” He puts the mouse down, finally, and shows me his finished work. I balk. I’ve seen that nose before on so many other people. I hate it. I hate the person looking back at me on that screen. I want to get out of that office as quickly as possible. We thank the doctor for his time and make excuses to get out of scheduling a follow-up appointment. We exit the building, and I never mention a nose job again. I realize this was my mother’s plan all along.

I’m 23 and dating a guy with a perfect nose. He’s a photographer, and he likes to take my picture when I’m caught off guard. One night he shows up at my apartment and snaps a photo as I’m opening the front door. “I love this and I love you,” he writes in an e-mail with the photo attached. In it, I’m smiling with my face turned to the side, and the light of the flash has settled entirely on my protruding beak. I put it up as my profile pic on Facebook. “Bella!” my aunt writes in the comments.

I marry the photographer.

Next, find out why we should stop telling women to “be more confident.”