If Grapes Could Talk, Here’s What They Would Tell You 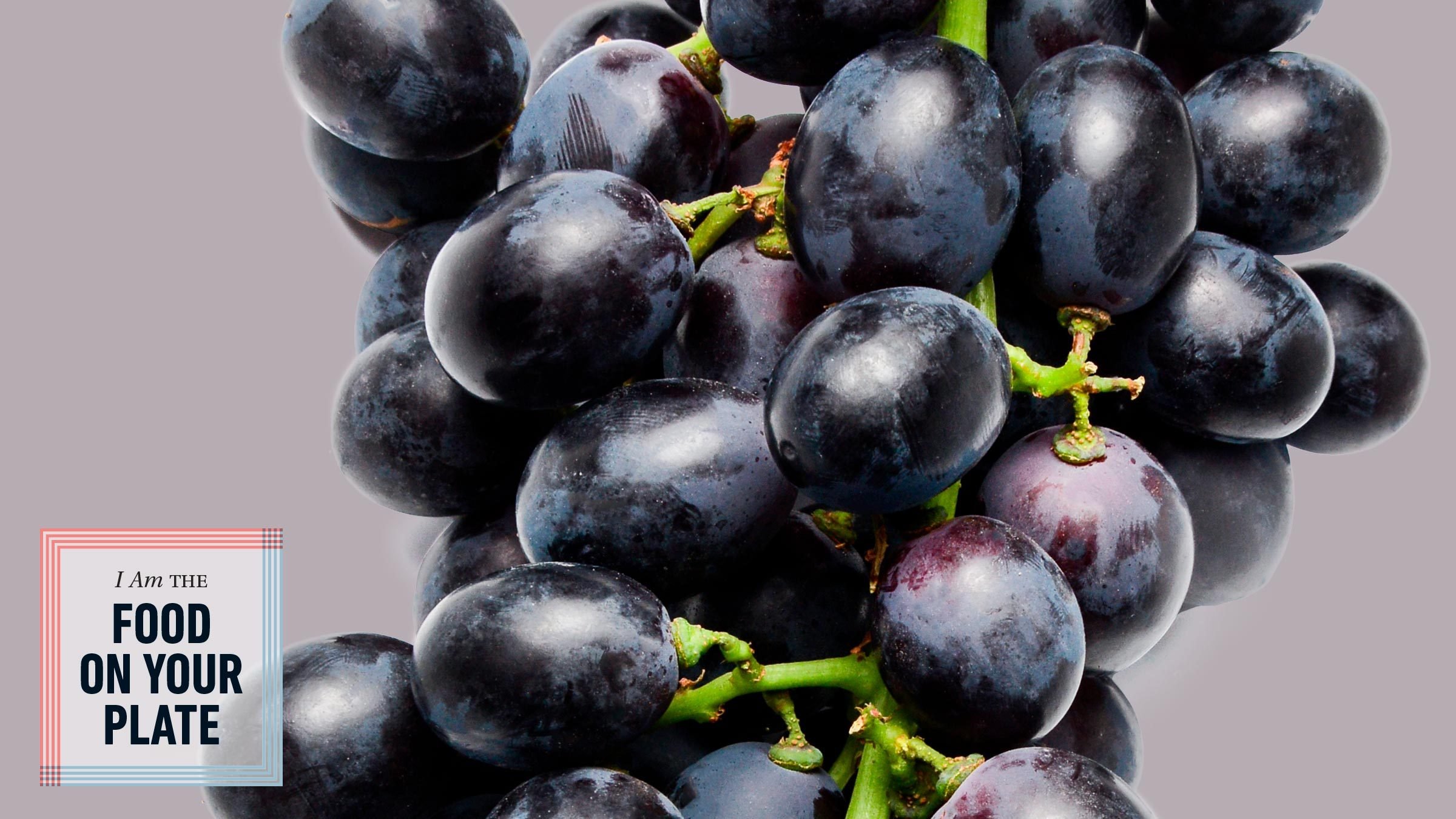 In 2017, a single sentence reverberated through the Internet, skidding across social media and breathless blogs: “They did surgery on a grape.” And they had! A video showed a tiny robot making delicate incisions in my thin purple skin before pulling back the translucent layer to reveal my juicy yellow-green flesh below.

The video was meant to demonstrate the surgical tool’s exacting abilities, but the sheer absurdity of the sentence, “They did surgery on a grape” caught on with millions, and I became a nonsensical Internet meme.

My popularity long predates my online fame, of course. After all—I also become wine! A resident of North America since before the Pilgrims, my native varieties (including the North American fox and scuppernong) were not great bases for wine, but clusters of me growing in Asia and Europe sure were. Early humans there learned that given the right conditions, I fermented well—just harvest my bunches, crush them to a pulp, and let the good times roll. (It wasn’t until later that modern micro­biology explained that my skins—if they haven’t been peeled off by a mini robot—naturally carry the yeast necessary for fermentation.) The ­Romans then spread wine ­making to just about every land they conquered. Perhaps Julius Caesar should have said veni, vidi, vini.

Alas, this entire wine world was almost lost in the 1800s. The first warning signs started with a guy named Thomas Jefferson. After working in Europe on a diplomatic ­mission, Jefferson took a keen interest in French wines and decided to see if he couldn’t make good vino stateside at his Monticello estate. He planted European grapevines in his fields, then watched as they withered and died. Though he didn’t know it, pests native to American soil had wreaked havoc on that European rootstock.

More disastrously, curious Euro­peans had shipped American grapevines to their shores to do their own experimenting. Those vines carried tiny aphidlike bugs called ­phylloxeras—likely the same culprits in Jefferson’s failed wine-making venture. By the late 1800s, the pestilence Jefferson encountered had destroyed as much as 90 percent of European vineyards, sending a centuries-old agricultural tradition to ruin.

The scientists who eventually figured out how to save Europe’s wine industry added yet another twist to my cross-Atlantic story. Their solution was to graft Old World wine varietals onto—wait for it—aphid-resistant American rootstock. That’s right: Almost all of the world’s great European wine drunk today is grown on good old American roots.

As the Europeans were grappling with the loss of their wine grapes, a minister, physician, and teetotaler in Vineland, New Jersey, Thomas Bramwell Welch, intolerant of the American penchant for booze, set out to stop my juice from fermenting into wine. As a physician, Dr. Welch was aware of Louis Pasteur’s work on pasteurization to render milk safe to drink. Dr. Welch decided to try the same thing, but with my juice, which he heated to kill the yeast that would otherwise transform it into alcohol. With that, shelf-stable grape juice was born.

Known first as “unfermented wine,” Dr. Welch’s product starred at the 1893 world’s fair, and America—on the road to Prohibition as it was—was hooked. By 1913, Secretary of State William Jennings Bryan served the stuff in lieu of alcohol at a formal (and I’m guessing wildly boring) diplomatic event. Sober adults and kids alike had a sweet new beverage to love (and, as a consequence, a whole lot more cavities in their teeth; Dr. Welch, who ironically was also a dentist, probably hadn’t predicted that unfortunate side effect).

Though you may not be as gregarious afterward, humans find me pure pleasure to eat too. Even my most conventional varieties, such as the green Thompson seedless and purple Flame seedless, can be happily popped by the handful into your mouth or set on a cheese board to tame a funky blue. If health is your concern, you may want to seek the darker-skinned varieties: The deeper-hued pigments are the botanical world’s most plentiful source of resveratrol, an antioxidant credited with antiaging properties (though, frankly, often overhyped ones). 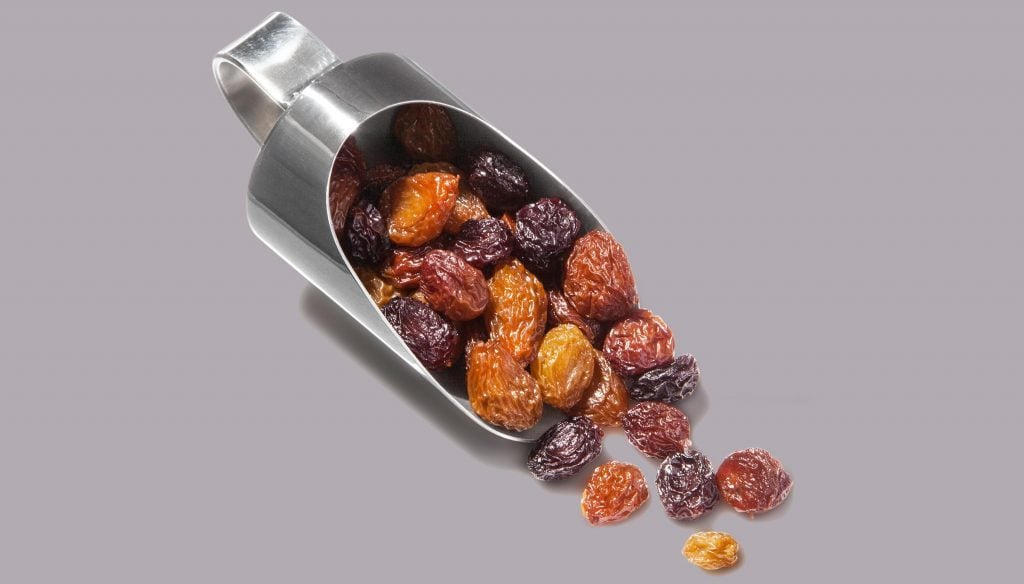 Of course, I also come as a mass-produced dried snack, as generations of schoolchildren know. Anyone who lived through the ’80s remembers those small red boxes of raisins (don’t remind me about how I was the most disappointing Halloween handout; I know, I know). You may also remember my great pop-culture moment: TV ads starring Claymation members of the popular California Raisins dancing to “I Heard It Through the Grapevine.” The Raisins’ recording of Marvin Gaye’s hit landed on the Billboard Hot 100.

These days, the raisin industry is shriveling, and the number of acres of farmed Thompson seedless grapes, the variety grown for raisins, has halved in the past 19 years. To combat the problem of those little red boxes disappearing, Sun-Maid, the company that owns about 40 percent of the raisin market, recently hired new management, introduced a sour-raisin product, and launched an ad campaign tapping into the nostalgia of this classic snack. And frankly? If I can’t win in pop culture, the ready-made meme that I am, I don’t know what can.

Spray a baking sheet with nonstick cooking spray. Scatter seedless grapes on the pan and cook them in a 225°F oven until they are shriveled but still slightly plump, about four hours. (How long this takes will depend on the type of grapes you use, the heating cycles of your oven, and other variables, so check often.) Allow raisins to cool, then use a thin metal spatula to separate any stuck ones from the baking sheet.