If Onions Could Talk, Here’s What They Would Tell You

In 1955, a farmer named Vince Kosuga had a villainous idea: He would corner the market on me, the common onion. Kosuga set about buying up all the onions in the country, storing millions of pounds of me in the cavernous, corrugated warehouses he built on his New York farm and around the country. Then he bought up all the onions that were still in the ground, too, in the form of futures. As you might expect, Kosuga took advantage of his monopoly by raising my price. Then he flooded the market with his stockpiled (and by this point, rotting) wares while making bet after bet in the commodities market that the price would drop. By the time Kosuga had made his fortune—$8.5 million, to be ­exact—a 50-pound bag of me cost less than the sack I came in.

The Great Onion Corner was a devastating moment for the onion-eating American public, and for onion farmers too. Congress subsequently passed the Onion Futures Act, and to this day, I am the only crop for which it is ­il­legal to buy futures.

Lest you think the OFA is the only bizarre law associated with pungent old me: In Dyersburg, Tennessee, for a time, one was not allowed to enter a movie theater within four hours of eating raw onions, and it was against the law in Lexington, Kentucky, to carry one or more of me in your pocket. Meanwhile, women in Wolf Point, Montana, were thought to be justified in forcing their spouses to eat raw onions if they were found drinking.

Just sitting there in your pantry or in the produce section, I look innocent of all charges. Whether yellow, red, white, or sweet like Walla Wallas and Vidalias, I am a simple dirt-growing bulb, with stem and root ends and not a whiff of the stink that might cause you to write harsh laws in my name.

But when you cut into me, the forensic truth reveals itself: I am an allium, a botanical genus that includes garlic, leeks, and chives, all of us built to defend ourselves via noxious, eye-watering fumes. When my cells are crushed or cut, an enzyme called alliinase and another called lachrymatory factor synthase react via a molecule called syn-propanethial-S-oxide. To translate those fancy scientific terms: I fight back.

The more I’m cut, the more vigorously I do so. Finely pureed raw onion will be more noxious than thick slices. Ring cuts will be more pungent than stem-to-root cuts, since pole-to-pole slicing damages fewer of my cells. Even knife selection makes a difference: A dull blade crushes more of my cells than a sharp one, which means more tears on your cutting board.

That combative tendency is what made humans fear me, along with garlic. When God tossed Satan from heaven, Turkish folklore has it, the ground where one foot landed sprouted garlic; the other gave you onions. But for modern humans, with your hankering for pungent flavor and willingness to cry to get it, nearly every cuisine has repurposed me from bad omen to bedrock aromatic vegetable. Today I play key roles in stocks, soups, stews, braises, and sauces everywhere. In France, I’m a component, along with carrot and celery, of the ever-present mirepoix; I’m a member of the holy trinity in Cajun and Creole cooking alongside celery and green bell pepper; and I’m pounded, often in the form of shallots, into Thai chile pastes. In Italy, I’m sautéed into the soffritto that adds depth to everything from meatballs to Bolognese sauce; in Spain and much of Latin America they make a similar base but spell it sofrito.

The list of my uses in cooking is endless, and these aren’t even my starring roles (see: French onion soup, stuffed onions, caramelized onion tarts, and more). To you today, there seems to be only one rule about me: Eat me often, and any which way—pickled or boiled in soups and sauces, dried and pulverized into onion powder, raw on bagels and sandwiches and in all sorts of salads.

If you love raw onion but want less intensity, soak me sliced or diced in cold water, or wash me briefly in warm running water, or soak me in vinegar to make a quick pickle in 15 to 30 minutes. And of course, cooking tames me, turning me increasingly soft and sweet as my natural sugars caramelize and the Maillard (browning) reaction takes place. Enjoy me grilled, sautéed, slowly sweated, caramelized, and roasted. Or roast me whole in my skins directly on live embers. (I don’t have that thick papery exterior until I’m “cured,” by the way, which basically means dried.) There is no culinary downside to me! Plus I’m high in vitamin C and antioxidants, especially an anti-inflammatory one called quercetin.

As for avoiding eye irritation, there are tricks that work and tricks that don’t. Chilling onions seems to help reduce the enzymatic reactions, as does avoiding the root end, which has higher concentrations than the stem end. Or just get over it—it’s all part of my acrid, controversial, entirely lovable package. 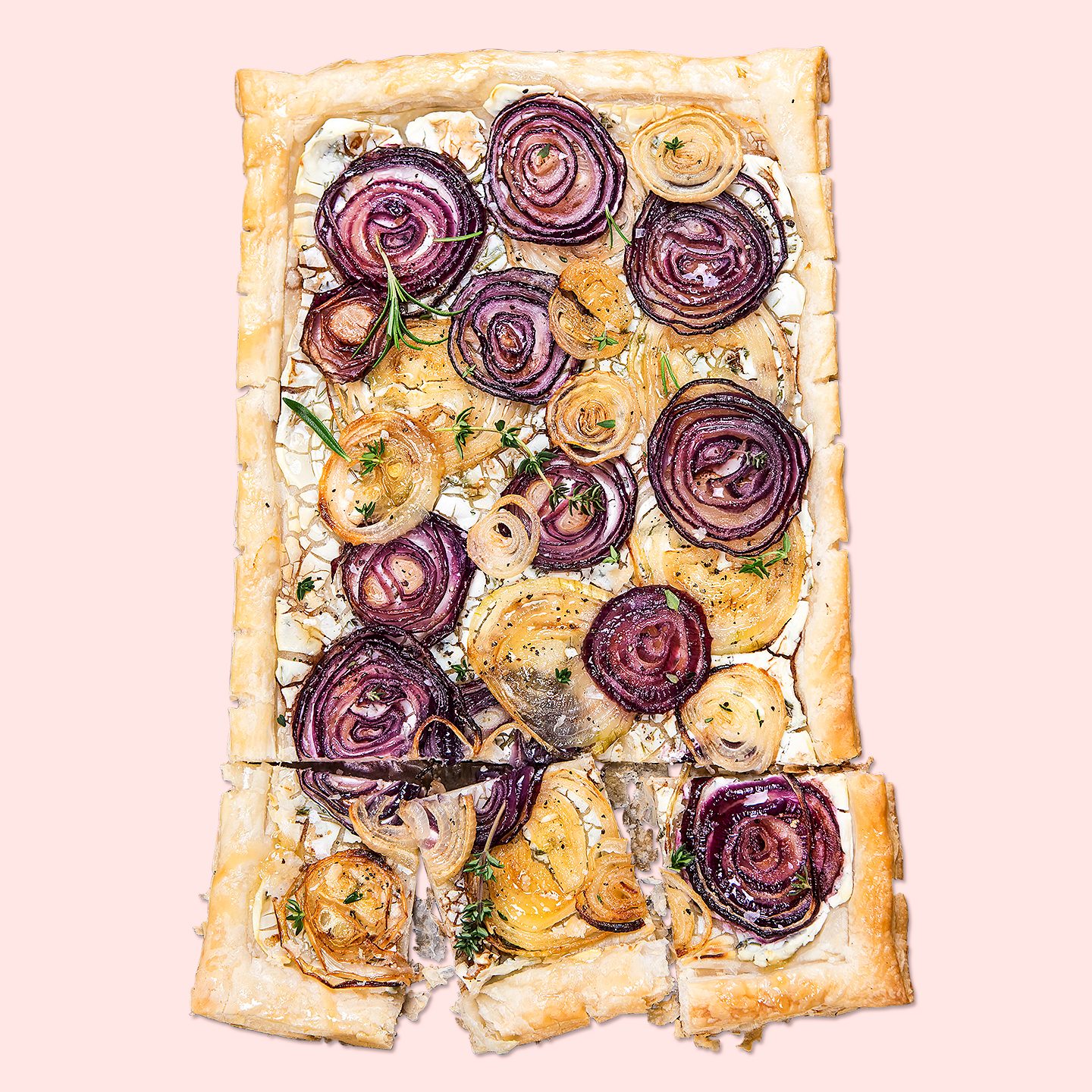 Slice a peeled medium yellow onion crosswise into ¹/8-inch-thick rounds. Arrange in a single layer, season lightly with salt, brush with olive oil, and microwave on high until onion is very soft and turning golden with some browned spots, about 15 minutes. Repeat with one red onion. In a small bowl, stir 5 ounces fresh goat cheese with 1/4 cup milk until smooth. Season with pepper. Unfold one 14-ounce sheet defrosted puff pastry on a parchment-lined baking sheet. Leaving a 1/2-inch border, spread cheese and carefully top with onion. Bake at 400°F until pastry is puffed and golden and onions are more deeply golden, 20–25 minutes. Sprinkle with fresh thyme and rosemary, drizzle with olive oil, cut into squares, and serve.

If Mushrooms Could Talk, Here's What They Would Tell You

Here’s What Happens When You Restrict Someone on Instagram
The Best Dessert in Every State
If Pistachios Could Talk, Here’s What They Would Tell You