If Pistachios Could Talk, Here’s What They Would Tell You

This crunchy snack is an American success story.

On a mild morning in November 1979, when a group of students clambered over the walls of the American Embassy in Tehran, I, the modest pistachio, might have been the furthest thing from everyone’s mind. As that day turned into an infamous hostage crisis, few were likely focused on the fact that Iran was by far the largest supplier of pistachios to the United States. Or that the sanctions imposed by President Carter, which included a ban on importing me, meant that you were going to need a new source.

At just a nickel for a dozen of me, I had plenty of American fans back then. I started out as a popular snack among Middle Eastern immigrants in the late 1800s but eventually spread to snackers of all ilk through bar, bus, and train-station vending machines. You could spot them by their red-tinged fingers, caused by the dye Iranian producers used to cover the imperfections on my shells (harmless splotches from the harvesting methods). But only a miniscule crop of me came from within U.S. borders, specifically California’s Central Valley.

There, in the 1930s, a botanist named William E. Whitehouse, fresh off a tour of Iran’s pistachio orchards, had managed to get one seed from one specific variety of tree—called Kerman, after the Iranian city where it grew—to barely take hold. Some 40 years later, from just that one variety, from just that one seed weighing all of a fortieth of an ounce, sprouted all of America’s pistachios.

In California and around the world, my trees may live for more than 150 years, but they take a couple of decades to reach full production. The first U.S. commercial crop, of just 1.5 million pounds, landed in 1976. But then, thanks to ample acreage of appropriately arid farmland (and also the necessary water supply), California’s pistachios flourished. My American version was a sweet, pristine, high-quality nut that not only replaced the gaping hole left in the supply chain but also overtook global demand. Chinese, Indian, and European shoppers increasingly sought American pistachios to the point that the current U.S. industry produces about a billion pounds of me annually, more than any other country. This 44‑year boom in the wake of a 444-day hostage crisis amounts to one of the most successful botanical takeovers in American history.

As the seed of the tree’s fruit—­actually not a nut at all—I grow in clusters like grapes, my hard shells splitting open with an audible snap when I’m ripe. By then, my hull has turned from green to white and then to a deep rosy pink, and the translucent shell inside it to opaque.
My appeal as both snack and ingredient is my earthy-sweet flavor, fatty richness, and crunch. I have the same amount of protein as almonds but a smidge less fat, and my protein and fiber—plus the fact that you have to slow your roll and shell each gosh-darn one of me before you eat it—make me a favorite among dieters.

I was first cultivated in southwestern Asia as early as 6000 BC. My status as a luxury snack goes back almost as far: The Queen of Sheba herself is thought to have hoarded all of her region’s harvest for her court. My reputation as an aphrodisiac may have helped my popularity and is not altogether hearsay: My fats reduce cholesterol and improve blood flow, and very preliminary research suggests I might have improved erections for men who ate me regularly.

Thanks to the Silk Road trade, I slowly made my way into the cooking traditions of Italy and Spain and other parts of Southern Europe, as well as North Africa and China. By now, I’m prized in many cuisines, often in desserts, though I show up in savory dishes too. I star in Moroccan tagines (often paired with chicken or lamb and dried fruits such as apricots or figs), Middle Eastern knafeh (a fragrant salty-sweet dessert made from cheese and syrup-soaked shredded phyllo), and honey-drenched baklava.

Of course, I’m also an ingredient in snack mixes, cookies, cakes, and, yes, everyone’s favorite green ice cream. Though note that most pistachio ice cream is flavored primarily with much less expensive almond extract; the specimens of me studded throughout are cover for the ruse.

As for that other ruse, the rouge ruse: These days in the United States, Central Valley farmers have mastered the art of whisking me off to be processed as soon as I’ve ripened and popped, leaving nary a splotch on my shell—and making my fans’ red fingertips a thing of my past. 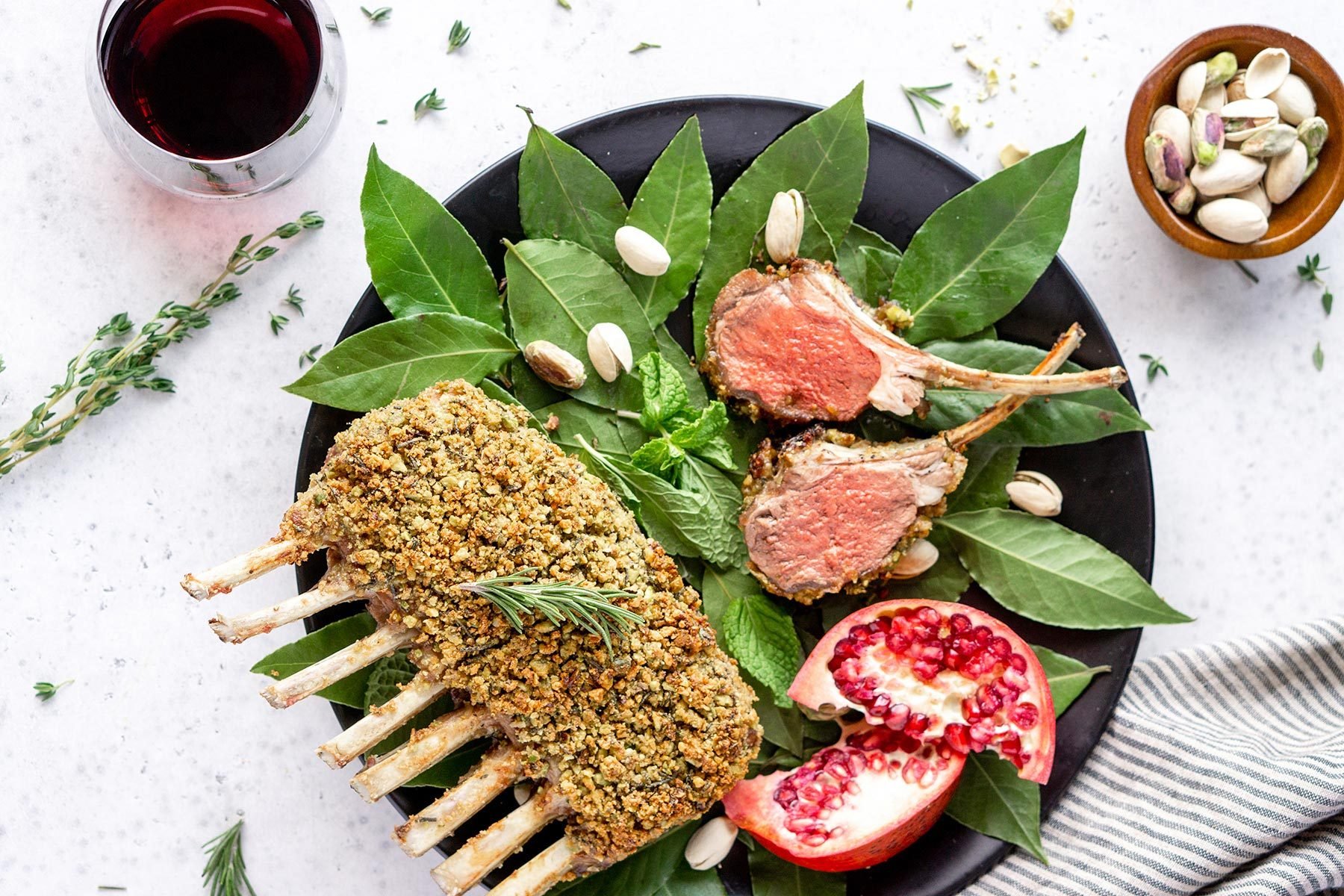 Preheat oven to 400°F. Combine 2⁄3 cup finely chopped pistachios with 1⁄3 cup panko bread crumbs and 1⁄3 cup grated Parmesan. Melt 4 tablespoons unsalted butter with 1 teaspoon fresh or dried thyme leaves and 1 minced clove garlic over medium heat until foamy. Combine with pistachio mixture and stir until dry ingredients are evenly moistened; season with salt and pepper. Season four 4-bone frenched racks of lamb (about 3½ pounds total) with salt and pepper. In a 12-inch cast-iron skillet, heat 1 tablespoon vegetable oil over medium-high heat until nearly smoking. Add lamb racks and sear until browned, about 3 minutes each side. Transfer lamb to a work surface and rub 1 teaspoon Dijon mustard in an even layer on the fat side of each rack. Sprinkle pistachio mixture over the Dijon coating, then press to form a compact crust. Return lamb racks to skillet, crust side up, and roast in the oven until a thermometer registers 130°F for medium-rare or 135°F for medium, 20–25 minutes. Let lamb rest 5 minutes, then serve whole or carve carefully into individual chops.

Kate Lowenstein is a health journalist and the editor-in-chief at Vice; Daniel Gritzer is the culinary director of the cooking site Serious Eats.

If Tea Could Talk, Here's What It Would Tell You

If Onions Could Talk, Here's What They Would Tell You

If Mushrooms Could Talk, Here's What They Would Tell You

Here’s What Happens When You Restrict Someone on Instagram
The Best Dessert in Every State
If Tea Could Talk, Here’s What It Would Tell You