In Case You Missed It: ‘Gangnam Style’ Goes Gangbusters

You didn’t really think you’d heard the last of “Gangnam Style,” did you? The viral video of this outrageous and 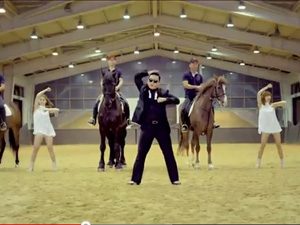 You didn’t really think you’d heard the last of “Gangnam Style,” did you? The viral video of this outrageous and infectious song by South Korean pop rapper Psy has been viewed more than 430 million times on YouTube, according to this week’s numbers, and is the most “liked” video in the history of this go-to site. Watch it here.

“Gangnam Style” (which pokes gentle fun at an affluent and influential seaside district called Gangnam in Seoul, South Korea) has been honored or parodied by dozens of groups as diverse as the United States Naval Academy and My Little Pony. Flash mobs of thousands have performed the song in Sicily, Jakarta, and Ithaca, New York, among other cities. Even North Korea has made its own mocking video in response to this worldwide phenomenon.

And don’t forget: kids, you can do this at home! Inspired by one mother-and-son team, my own family is not immune: we’ve opened the video on a laptop and done this crazy pony dance in the kitchen (though this has yet to be recorded). A final note: the American Council on Exercise reports that “Gangnam Style” will burn 150-200 calories per half hour, but I swear it feels like even more.