On April 3, 1973, Motorola’s DynaTAC 8000X debuted as the world’s first-ever mobile telephone, eventually hitting the market at about $4000 a brick. Forty years later, the price point isn’t the only thing that’s fallen. (We’re saying we drop our phones a lot.)

What other changes has the world seen in the four decades of the mobile phone’s history? 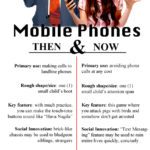 Say These 8 Words to Siri, and She Will Break Out Into Song