Inside the Dirty World of an Outlaw Pilot

They'll run food or medicine, guns or drugs, for the highest bidder. They'll fly in planes that are held together by spit and duct tape. These ex-Soviet pilots are living lives that would frighten even James Bond. 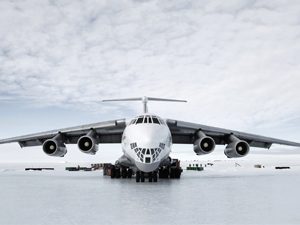 THERE IS NO WARNING, just a sickening lurch upward as we abandon our flight path. A red light goes on in the cockpit. The instruments say we’re over Kabul, Afghanistan, where we’re supposed to be landing, only now we’re climbing—and we’re doing it too fast and too steep. “What’s going on?” I ask in Russian.

“Missiles,” shouts a crew member, Sergei, over the scream of the battered Ilyushin-Il-76—the Soviet-era cargo plane they’ve flown since their Red Army days. Under my feet, the gaffer-taped, 20-year-old jet groans and pops. “Here’s where they start shooting.”

For the first time, I notice he stinks, not just of sweat and oil but of booze.

He shrugs. “Mujahideen. Rebels. Soldiers. Mikhail is a top pilot. He knows the airstrip from the war. He’s got this method where he lands by climbing up high over the airport, then dive-bombing the runway, like a corkscrew. You don’t get shot down that way. His trick is knowing when to pull up out of the dive. Incredible! You watch.”

Suddenly the plane levels off. The engines are almost hushed now, and an odd feeling of weightlessness washes up from the soles of my feet. It takes a moment for me to register the sudden downward tilt. Then we plummet earthward, and my stomach passes up through the top of my skull.

Against my better judgment, I lean so that I can look over the pilot’s shoulder. Mikhail is hunched forward like a man reading on the toilet or praying. Either way, I’m with him. The ground is more than very close now; it’s just yards from the nose. Pull up. For God’s sake, pull up!

The giant Ilyushin-Il-76 was the USSR’s ultimate warhorse. A monstrous cargo jet first built in the early 1970s, it saw action on every front, in every capacity. It can carry 55 tons of guns, soldiers, tanks, bombs, or anything else halfway around the world. And these days, for half a million dollars, anyone can have one. But the Il-76 also carries a secret: Beneath the floor of the cargo hold, its Soviet creators added a number of extra spaces. Originally designed for escape equipment, armaments, and classified payloads, these secret chambers don’t appear on any cargo paperwork; they won’t be checked by customs; officially, they don’t even exist. But they are there. And if you’re determined enough to fill them—and foolhardy enough to fly—then your plane will carry up to 13 extra tons of phantom cargo—cargo that some men are determined to take airborne, though it means risking their lives.

Mikhail is one of those men.

“Some people deliver letters for the post office. That’s me,” he explains, walking along the tarmac in Kabul. “Just a mailman. Only the parcels are heavier.”

I don’t know what I had expected an outlaw aviator and international gunrunner to look like, but Mikhail, whom I take to calling Mickey, is definitely not it. Heavy-boned and stooped, he looks 50, maybe more. His gaunt, ashen face carries a permanent expression of mild disappointment better suited to anti-smoking ads in hospital waiting rooms than to wanted posters at the UN.

“When the USSR broke apart,” Mickey explains, “some of us took our chance to do something different.” That something was a dramatic escape from the military and a bid for a piece of the private-enterprise pie. “We knew some people, and when they ‘acquired’ a military plane, we flew it down to Kazakhstan and, you might say, rebranded.”

Call them, and they’ll fly whatever you’ve got—guns, drugs, medical supplies—to wherever you want it. “We fly a lot of freight,” Mickey explains. “Military things. And a lot of aid.” Which has had the strange effect of turning Mickey, his men, and their “partners” into rather reluctant saints too. Because from Pakistan to Somalia, from famines to tsunamis, Mickey’s battered Ilyushin is often the first to arrive in disaster areas with lifesaving humanitarian relief. Chartered by everyone from NGOs to Western governments, these planes are regarded as agile, responsive, and able to get more aid closer to hazardous, harder-to-access disaster zones than anything else. Still, casualties are high, and the roll call of death makes for sobering reading.

Over just the past few years, an entire ex-Soviet crew and all passengers were killed when an Il-76 blew up in midair over Uganda; a Ukrainian Antonov An-12 (a Russian-built cargo plane similar to the Il-76) crashed on takeoff in Egypt, killing all on board; three out of four crew were killed while attempting a landing in the Congo; and an Il-76 on an aid run to Sudan burst into flames over Pakistan, killing all eight crew members.

Few of these airmen are putting their lives at risk for solely humanitarian purposes, however. “If you wanted to,” a former pilot told me, “you could take off with whatever you like on board, wait until you’re out of radar range, buy yourself some time by misreporting your position, divert somewhere to make an illicit rendezvous, land, unload your cargo, take on more contraband, and resume your original flight plan. In the places where these guys operate, nobody will notice if you’re 40 minutes late.”

This is a business where not everything is quite as it seems. One international monitor recently identified these Ilyushin-Il-76s as a key to the transport of narcotics, suspiciously sourced diamonds, arms to terrorists, and sanctions-busting supplies to rogue regimes like North Korea.

In this world, a cargo hold full of blankets bound for a disaster zone can apparently transform—in midair—into one of land mines for a rebel militia or bootleg goods for a local Mafia. And a flight ferrying doctors and medicine may also hold in its secret compartments the very Kalashnikovs that will be used to execute the patients.

John is an England-based middleman who matches crews with aid organizations. He recounts one wildcat Il-76 job that left the American military command in Afghanistan breathless with awe. “The U.S. military had this huge generator they needed to get to an airfield site they were planning in the south,” he explains. “This was a remote area, and aside from a few pockets of U.S. troops, it was completely under bandit control. There was no fuel available for miles around, and none of the outfits we approached would touch it. They kept saying, ‘We’ll never get out again; how can we take off from an unprepared airfield with no fuel?’

“The job was priced between $60,000 and $70,000, but one day there’s a phone call from these Russian guys. They said, ‘We’ll do it, but it’ll cost you $2 million, in advance.’ The Americans didn’t have a choice at this stage, so they paid. And sure enough, right on time, this ex-Soviet air force crew flew in, in this battered old Il-76, unloaded the generator, and then sat down for a leisurely smoke.

“Just as the Americans were wondering how they were going to fly out again, up clatters this old minibus driven by some Afghan bloke—and these airmen just get in and drive off.

“The Yanks were going, ‘Hey, how will you get the plane back?’ And the crew said, ‘We won’t. We bought it for this job, and we’re ditching it here.’ Half a million dollars it cost them. They held it together with string, just long enough to land, cleared $1.5 million in profit, and left it to rust. It’s still there.”

The Four Turkeys Bar may be the sleaziest pilot pit in the whole of Entebbe, Uganda. Mickey, who arrived here in Uganda en route from the Congo to the United Arab Emirates, is so face-meltingly stoned that he can barely stand up. I am here with five very loaded mercenaries, and all their languages have mystically melded with mine into a series of half-finished gibberish, canny smiles of recognition, and shouted exhortations to drink. Scanning the dark, narrow room, I spot Ugandan hookers, tattooed South African military contractors, and enough Russian airmen to form a squadron. Referred to by names like Little Minsk and Russiaville, bars such as the Four Turkeys provide homes away from home for Russian expats, even showing Russian sports on TV.

Close by is the office of Iain Clark, the director of a respected global air charter. Clark explains how one flight in 2010 underlines the anytime, anywhere capabilities of outfits like Mickey’s. He’d hired one outfit to make a cash-ransom drop to some Somali pirates. The Russian-speaking crew weren’t allowed to know their destination. They were simply given a set of GPS coordinates and handed a cheap mobile phone. “They had to fly to certain coordinates given by the pirate ship,” says Clark. “Once they got there, the pirates would text them new coordinates.” The pilot and his crew shrugged. No problem.

The plane steered a steady course toward the GPS coordinates, rising eastward, passing over Kenya and the wild borderlands of Ethiopia, then out over Somalia and low over the pirate-patrolled sea. As they roared on to their destination, the phone in the navigator’s hand buzzed. There was a new set of coordinates. The pilot turned his plane in a wide arc and followed this new instruction. Keeping low, the crew scanned the water for boats, flares, RPG fire, anything. At this point, they could only trust it was not a trap. Then, at their next set of coordinates, they made visual contact with two small, fast boats in the water below.

The navigator’s phone rang, and an English-speaking voice said simply, “Don’t stop. Just drop the money.” The strongbox and its attached parachute were already positioned; the loading ramp, open. A crew member cut the lines, and $20 million was released into the sky. The last thing the pilot saw as he turned the plane for home was the pirate boats speeding toward the strongbox.

Because the whole operation was carried out on a need-to-know basis, nobody—not even Clark—really knew what was going on. But the aircraft’s operator, a Johannesburg-based Russian aviator, tells me the ransom was dropped on behalf of none other than Lloyd’s of London.

It’s an intriguing counterpoint and one that highlights the way big Western shipping businesses and former Soviet pilots, legitimate blue-chip multinationals and Somali pirates, coexist—if not happily then at least in a way that keeps the wheels of everybody’s businesses oiled and rolling. It’s also a fascinating snapshot of the weird force field of mutually repellent opposites that keep outfits like Mickey’s flying in the middle. When transactions are regularly called for between perhaps the world’s most venerable finance institution and AK-47–toting cutthroats in speedboats off the Somali coast, there’s only one mutually acceptable, ready, willing, and able group of middlemen. And it sure isn’t UPS.