Burdened with post-traumatic stress disorder from her 12 years in the Army, this veteran endeavors to find a place in America's workforce.

As an Army reservist, Bachler took part in the recovery effort at Ground Zero after 9/11. Subsequently, she served in Kuwait during Operation Iraqi Freedom, where she sustained multiple ankle injuries. The net effect of military service coupled with her brother’s suicide left her with physical and psychological wounds she carried home after her tour of duty ended in March 2011.

Since then, Bachler has struggled with PTSD. “You can’t see PTSD, but it’s always there,” she says. “I fight it the best I can, but I’m always on guard in a crowded environment, always hypervigilant.”

The best medicine Bachler has found for the ongoing anguish over her brother’s suicide and for the chronic pain following reconstructive ankle surgery is Grapefruit, her psychiatric service dog. Grapefruit is by her side day and night to help cure her insomnia, reduce her dependence on pain medication, and calm her fears about everything from flying to meeting people. 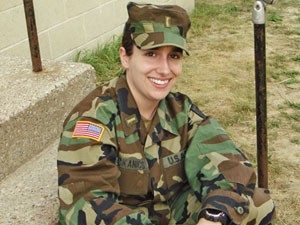 But employment still seems out of reach. Bachler has sent out nearly 500 résumés since she left military service. Yet interviews have been rare. Taking Grapefruit with her, as she must, is like “wearing a big sign around my neck saying ‘Don’t Hire,’ ” she says. She has never been called back for a second interview.

Another burden Bachler and other vets bear is an anemic personal network in the civilian job market, a result of years spent in service. The Wounded Warrior Project, created to support and assist injured service members, has provided her with guidance and some contacts, but so far the leads have not panned out.

Facing a dismal job market, Bachler and her husband, Don, who retired from service on April 1, 2012, have decided to leave their home in Leavenworth, Kansas, and try their luck in San Antonio. The job market there, they have heard, may be better.