Fed up with the “all or nothing intransigence” that is paralyzing Washington, Fortune magazine writers Geoff Colvin and Allan Sloan 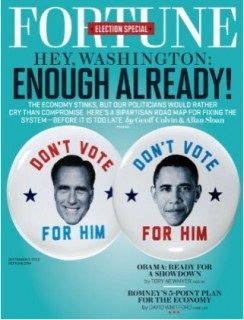 Fed up with the “all or nothing intransigence” that is paralyzing Washington, Fortune magazine writers Geoff Colvin and Allan Sloan have come up with their own bipartisan plan to fix the economy.

Yes, I know, you’ve heard it all before. But this plan is different. For one thing, it’s written in plain english, with almost no jargon, so you can actually understand it. For another, the authors’ primary goal is “to give neither side everything it wants—to adopt policy so relentlessly bipartisan that it attracts strong, stable support from both sides.” Sounds like a fantasy, but these guys are serious, as the details of their spending and tax initiatives make clear.

Besides cutting the defense budget and making Social Security pay-as-you-go (that sound you hear is the bellowing of sacred cows being led to slaughter), their plan would “restrict the end-of-life-care that Medicare will pay for,” noting that 25 percent of all Medicare spending went for people in their last year of life. It would also “surcharge smokers and the ultra-fat for their Medicare.”

On the tax side, the self-described “congenital optimists” would phase out tax deductions for mortgage interest and charitable giving.

Yup, there’s a lot to ponder here. Give it a read and tell us what you think.