What I Learned in the Shoe Store 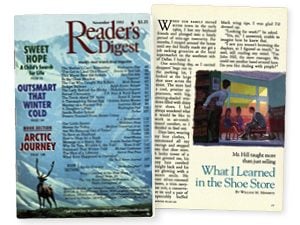 When our family moved across town in the early 1960s, I lost my boyhood friends and plunged into a lonely period of teenage insecurity. For months, I moped around the house until my dad finally made me get a job sacking groceries at the local supermarket on the southeast side of Dallas. I hated it.

One scorching day, as I carried shoppers’ bags out to the parking lot, I looked at the large shoe store across the street. The store had a cool, pristine ap­pearance, with big, awning-shaded win­dows filled with shiny new shoes. I had always wondered what it would be like to work in air-­condi­tioned comfort, so I decided to find out.

Days later, wearing my best clothes, I summoned all my courage and stepped into that shoe store. A lanky tower of a man greeted me, his gray hair combed straight back and his face glowing with a sincere smile. He wore silver­-rimmed glasses, a trim navy­ blue suit, a conservative tie and a pair of impeccably buffed black wing tips. I was glad I’d dressed up.

“Looking for work?” he asked.

“Yes, sir,” I answered, unable to imagine how he knew that.

“I saw you weren’t browsing the displays, so I figured as much,” he said, still reading my mind. “I’m John Hill, the store manager. We could use another hand around here. Do you like dealing with people?”

The question caught me flat­footed. I could count on one hand the friends I’d made since we moved to this neigh­borhood. To me, kids around here seemed cliquish and unreceptive, and I was near the point of saying “who needs ’em” to the entire lot. I dug my toe into the carpet. “I suppose,” I answered with little conviction.

“That’s not much of an answer,” he said, placing a hand on my shoul­der. “Half of selling is putting peo­ple at ease. If they get the feeling you really care, they’ll respond to that. They’ll actually become reluctant not to buy from you. But if they get the impression you’d rather be doing something else, they’ll be out the door before you know it.”

He made it sound so simple. Some­thing told me I might learn a great deal from this man who seemed to like everyone.

For whatever reason, Mr. Hill hired me that afternoon. My first days on the job were spent listening to the dos and don’ts. “We don’t do things like other shoe stores,” Mr. Hill said, pointing toward the busy boulevard outside. “Folks have to go to a little extra trouble to come over here, so we try to give them something extra in return. Think you could do that?”

My self-­doubts crept to the sur­face. “What if you don’t have what they want?” I asked, surprised at my own boldness.

Judging by the look on his face, I must have committed sacrilege. “Never tell them that!” he insisted. “Instead, show them what you do have.”

“Show, don’t tell,” he interrupted. “You can’t always offer people what they want. But you can always offer something. Whether they accept it is up to them. But if you show an empty hand, you take away that choice, and they have to look elsewhere. Just remember that you’ve always got something that will make a person’s eyes light up. You just have to figure out what that is.”

He then took me on a storewide tour and explained the pay system: hourly wages plus a percentage of sales. The biggest commission was on shoe polish, with purses and accessories close behind.

Next, we pretended I was a cus­tomer just arriving. “Welcome to our store,” Mr. Hill said, genially shaking my hand. He escorted me to a seat, pulled up a stool and, before I knew it, gently removed my shoes. “Would you mind standing on this?” he asked. Then he measured both feet.

“Aren’t you even going to ask what I want?” I said when I sat down again.

“Yes, now that I’m in control,” Mr. Hill replied. “See, you’re sitting in a comfortable chair with your shoes off. You can’t just get up and leave, so this is when I ask people what they have in mind.”

“Never ask someone’s size!” he insisted, shaking a finger at me. “The purpose of measuring is to establish in the customer’s mind that you know what you’re doing. That gives them confidence in your recommendations.”

Confidence. It was hardly my best asset. But Mr. Hill certainly had it, and I was determined to see how it worked. As the days passed, I became his shadow. I watched as he defused the grouchiest of cus­tomers by making jokes. Often, they were about his skinniness. “You know,” he’d say, patting his bony rear end, “if I don’t quit eating so much, I’m going to get too big for this darn stool.”

Once, I watched as he worked with two women shopping together. He brought them not only the shoes they had asked for, but several other pairs. While they were trying out the requested shoes in front of the full-­length mirror, he handed them the matching purse. “Let’s see how this looks,” he said, almost innocently. Then he displayed other shoes in a neat semicircle around his stool. Next to each pair he placed a hand­bag. Who’s to say what those cus­tomers had in mind when they walked in that day? But when they walked out, each had several pairs of shoes, a couple of handbags and a very satisfied smile.

“If you give people only what they came for,” he said during a lull, “then you haven’t sold anything. Give them that, then sell them something. It’s good for the store’s volume, it’s good for your commission and it’s good for you. Selling gives you a feeling of self­-confidence, and once you’ve discovered it, it’s yours for life. You’ll use it in more ways than you can imagine, because everything we do involves some form of sales.”

Soon after, when it was time to assist my first customer, the butter­flies swirled in my stomach. Mr. Hill pulled me aside and offered his assurances. “Just treat them like you’d want to be treated, and the rest will take care of itself,” he said.

After seating a woman and her daughter, measuring their feet and showing them matching suede penny loafers, I suggested a water-­repellent spray and a wire brush for main­taining the nap. The woman bought everything, and I don’t know who was more pleased—me or Mr. Hill.

Though it was hardly an overnight transformation, I became a marginally gifted salesman, thanks to Mr. Hill’s example. It was a rare day that I didn’t learn some new tech­nique from him.

Once, I even saw him suggest to a rather large woman that the size­-nine shoe she was trying on was actu­ally the size six she had requested. With a puzzled look on his face, he turned the shoe over and showed it to her again. “They must have stamped it upside down,” he explained with a silly grin.

Obviously amused, the woman bought the shoes and vowed to come back soon.

As the months lapsed into years, Mr. Hill became more like a wise uncle than a boss. His guidance touched many facets of my life—from career counseling to the tor­ment of teen­age romance. “I wish my parents could be more like you,” I told him one quiet evening when we had the store to ourselves.

Mr. Hill dropped his chin and peered at me over his glasses. He had met my folks on several occa­sions and thought highly of them. “And how’s that?” he asked.

“You and I can talk about any­thing and you never get upset. I can’t do that with them.”

For a long moment his eyes drifted from mine. Finally, he turned back to me and said, “It’s difficult to be a good parent and a good friend at the same time, so don’t be too hard on your folks. They’re fine people.”

Mr. Hill was right. I had learned a lot under his tutelage, but I’d taken little of it home with me. Per­haps, if I were to act more like an adult, they’d treat me that way too. I’ll never forget the look on their faces a few days later when I vol­unteered to stay home with my baby sister so they could go out.

I continued working at that shoe store until it was time to leave for college. Never once did I dread going to work—until the day it was time to say good­bye. With the oth­ers already gone for the night, I walked up to Mr. Hill and swal­lowed hard. “You’ve done an awful lot for me,” I said. “I’ll always appreciate it.”

When he looked at me, his face was flush, his eyes slightly moist. “I didn’t do anything,” he said, flash­ing a bright smile. “You did.”

“But you showed me how,” I countered.

“Anyone could have done that—your folks, your teachers, your pas­tor. It’s just that you were ready to listen when you met me. It was inside you all along.”

I thought about that for a moment. Since coming to work at the shoe store, I had taken part in the senior play, gotten involved in some organ­izations, run for a couple of offices and made many new friends. It turned out my peers had never really closed me out of their lives. It was the other way around, just as it had been with my folks. As soon as I opened up to them, everyone responded.

Have confidence in yourself and others will too. Don’t tell, show. Treat people as you would like to be treated. Always offer more than expected.

Those simple rules have since found their way into many corners of my life—from business to family and beyond.

In teaching me about selling shoes, Mr. Hill gave me something far more important—a powerful secret for liv­ing. You won’t always have what people ask for. But you’ll always have something in that vast inventory. If not another pair of shoes or a can of polish, try offering a piece of yourself.

How to Get Rid of Salt Stains in Your Car
When a Scuba Diver Didn’t Return to the Surface for Hours, This Diving Expert Refused to Give Up on Him
A Bear Followed Me on a Camping Trip—And We Developed a Real Friendship