Because we have all been too afraid to ask. 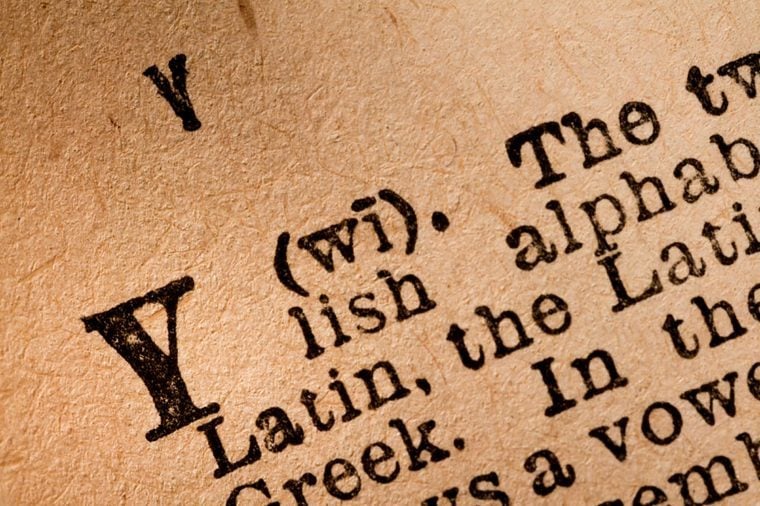 Benoit Daoust/ShutterstockA, E, I, O, U… and sometimes Y. We’re all familiar with this classic childhood jingle. But think about it: Can you actually explain what the last phrase means? If your only response was to blink in confusion, you have come to the right place. (But don’t even get us started on the six extra letters that used to be in the English alphabet.)

In order to understand this little grammar rule, we should first harken back to the days of kindergarten phonics. That is, let’s recall the difference between a vowel and a consonant. According to the Oxford English Dictionary, a vowel is “a speech sound which is produced by comparatively open configuration of the vocal tract, with vibration of the vocal cords but without audible friction.” A consonant, on the other hand, makes a sound in which “the breath is at least partly obstructed.”

Now try pronouncing a word like beyond. Do you feel the obstacle to the breath between the two vowels? That means that Y is acting as a consonant. Same goes for words that start with the letter Y, such as young and yes. Thanks to the break at the beginning of those words, the Y is a consonant. (These little grammar rules can make you sound smarter, too.)

If you’re still a little confused, don’t sweat it. Here’s the bottom line: “Whether the letter Y is a vowel or a consonant is [a] rather an arbitrary decision,” according to the Oxford English Dictionary. But overall, “the letter is probably more often used as a vowel.”

If your mind hasn’t been blown yet, you’ll want to check out the crazy English grammar rule you didn’t know you knew.

8 of the Biggest Presidential Tax Scandals Throughout History

8 Reasons Sharks Are So Misunderstood