She Lifted a Car Off Her Dad and Saved His Life

Lauren Kornacki's father was working on a car when it fell of the jack, crushing him and knocking him unconscious. What happened next was extraordinary. 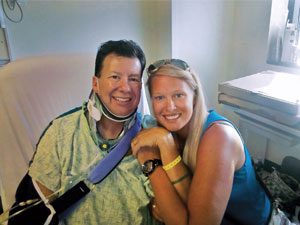 Courtesy Lauren KornackiNearly two years ago, Lauren Kornacki, a recent college graduate, walked outside her family’s home in Glen Allen, Virginia, to ask her dad if she could borrow his car. As she rounded the corner from the front yard into the garage, Lauren, then 23, saw her father, Alec, lying unconscious, pinned on his back beneath the 1995 BMW. The car had fallen off the jack while he was changing the brake pads on the right rear tire.

Lauren yelled inside to her mother to call 911, then ran to the car. “I thought, I’m going to lose my dad,” she says. Unsure of what to do, she spontaneously stuck both hands under the wheel hub where Alec had removed the tire and pulled up with all her strength. To her surprise, she lifted the car. Then she held it up with one arm and, with the other, pulled her father out from under the car by his pants leg.

“Stay with me,” Lauren whispered as they waited for the ambulance. “Just keep breathing.”

Doctors treated Alec for five fractured ribs, a fractured sternum, and fractured vertebrae, but he was able to return to his job as an IT professional two months later.

Lauren, now a computer engineer, says she didn’t stop to think. “Everyone has a basic instinct to help the ones they love,” she says.