10 Reasons Lizards Are Misunderstood and Why We Need Them 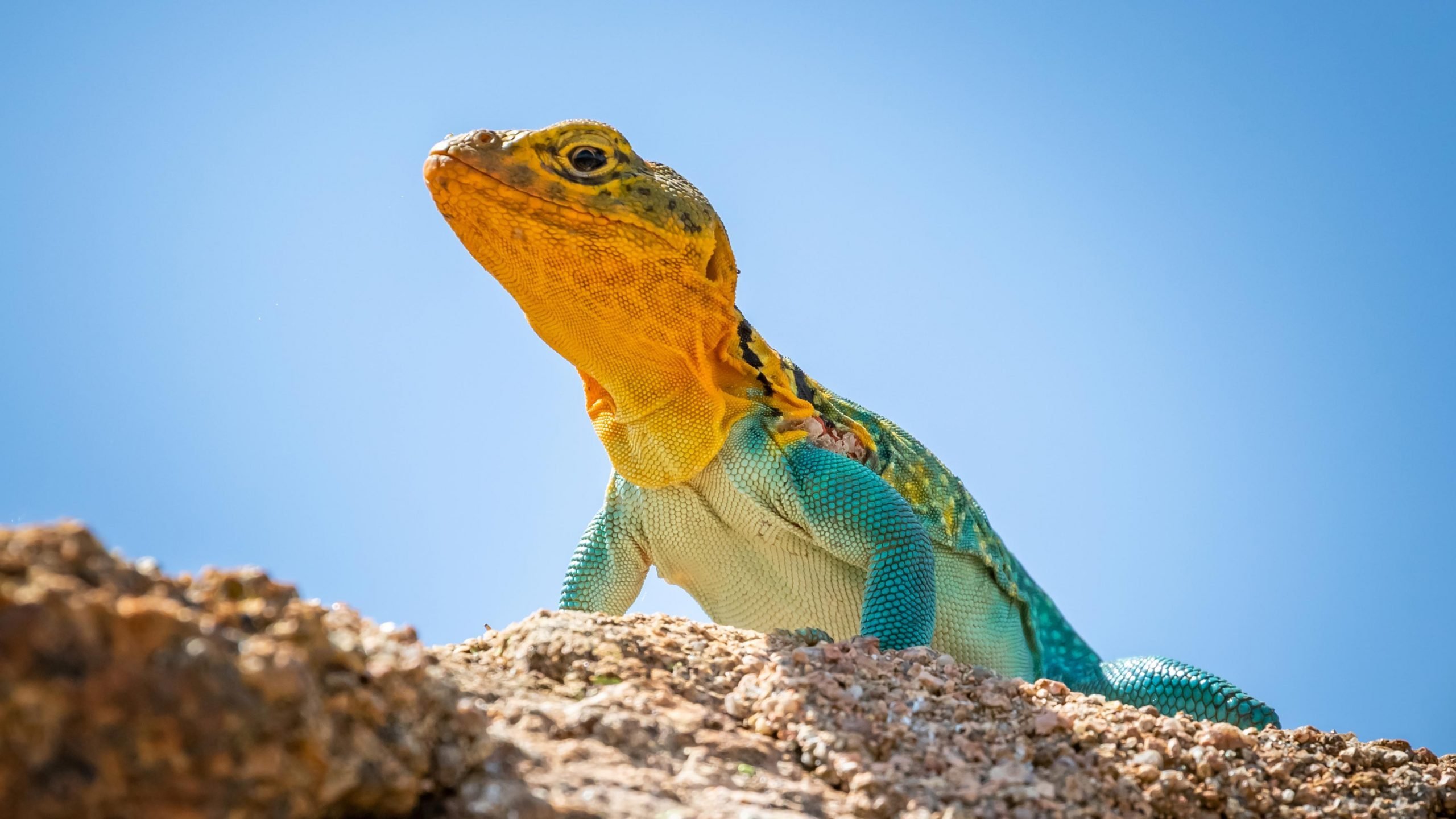 Some lizard species are called "monsters" or even "dragons," but they're not the scary reptiles pop culture has led us to believe. For World Lizard Day, let's find out the truth about these cold-blooded creatures.

Lizards sometimes get a bad rap in movies, comics, and TV. From Godzilla, to the Spider-Man villain The Lizard, to the alien reptiles of V, they’re often portrayed as scary, sneaky, and unknowable. Conspiracy theorists even believe actual lizard people rule the world. But lizards are one of those animals that aren’t as dangerous as you think. True, there are some cute famous lizards, such as the Geico gecko, but the actual facts about the over 4,675 species of the animal, and how they can help humans, are largely misunderstood. Here’s why they’re a crucial part of our environment, and our lives.

They have some amazing features

What makes a lizard a lizard? It’s a little hard to pin down. According to the San Diego Zoo, most lizards have four legs and a tail. Although there are some, like North Carolina’s glass lizard, that doesn’t have legs and instead looks like snakes—it’s definitely on our list of the strangest animals found in each state. Most lizards have movable eyelids, unlike snakes; although some can’t blink, and instead have to lick their eyeballs! Some eat meat and some are herbivores. They smell with their tongues, shed their skin in large flakes, and can regrow their tails if attacked. Some lizards have cool features like spikes, a “frill” around the neck, or eyeballs that shoot blood to frighten predators. Some can even walk on water and others can reproduce by themselves. We’re constantly learning more about the cool things lizards can do, and how they accomplish them.

Some of these awesome lizard adaptations are leading to new technologies for humans. Geckos, for example, climb up vertical surfaces effortlessly thanks not to some kind of sticky goo, but to tiny hairs on the bottoms of their feet that attract molecules and allow them to cling. Research into how their feet stick even in the presence of moisture has led to new surgical bandages, adhesives for wet environments, new kinds of furniture and textiles, and even ways to climb up buildings. This gecko tech may also help create better prosthetics, as well as traction for robots working in space or at disaster sites. 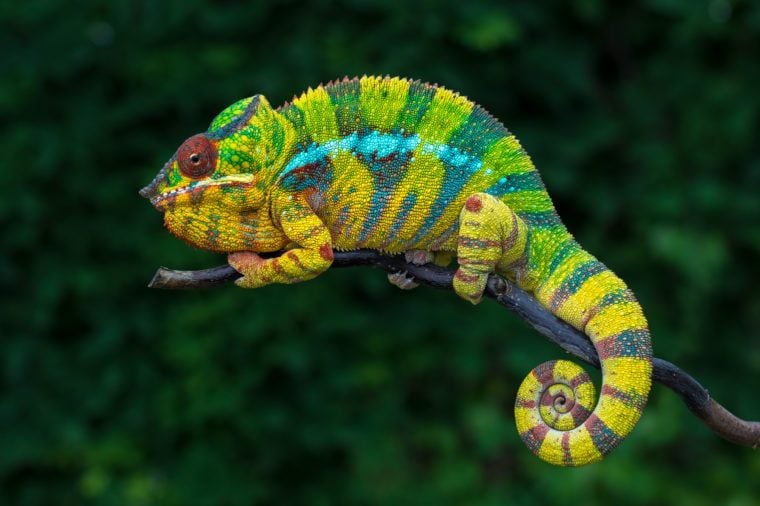 Believe it or not, humans barely understood how or why chameleons change color until recently. Although often thought to be just about camouflage, the reason for the color change turns out to be one of the “facts” about animals you have all wrong. Switching hues actually reflects emotion, according to National Geographic, and is used to send messages to other chameleons. Also, the lizards don’t achieve their hues by pigment alterations; rather, recent research shows they have special cells under their skin containing nanocrystals that act like tiny prisms. Understanding how this works may help people create better surface technology, such as appliances that don’t create reflections. More lizards, such as the green anole, are other animals that can change color.

Okay, so it sounds like lizards have some benefits for people, but should you be scared of them, as many people are? For the most part, no, even when you’re talking about the biggest lizard on earth, the over 150-pound Komodo dragon. The huge reptile lives only in Indonesia—but tourists won’t be able to visit Komodo Island, one of 17 places that have been ruined by tourism, after this year because of dragon smuggling. So you probably won’t ever run into one, but if you do, “I would not approach it and would not recommend anyone approach it,” Matt Evans, supervisory biologist at the Reptile Discovery Center at the Smithsonian’s National Zoo in Washington, DC, told MTV News. “A small person, a child, can definitely be considered a meal to a large Komodo dragon if that animal was starving or really having a difficult time finding prey. [But] for the most part we are not on the food chain.”

In fact, they help us because they eat pests

Lizards live on every continent on earth except Antarctica, so chances are you’ll come upon one at some point in your life. But don’t freak out: If you spot a little lizard in your house, it may actually be a good thing. Most lizards eat insects, so they can help rid your home and garden of harmful critters.

But they don’t make good pets

Lizards can be considered an invasive species in areas where people have released them and they’ve gone on to thrive in the wild. Why do pet owners let them go? Many people don’t realize what goes into caring for a lizard, so if you’re thinking about getting one, know what you’re getting into. A lizard can be an investment due to the insects and other food you’ll need to feed it, the special lighting it requires to maintain its body temperature, the size it may grow to (iguanas, for example, can grow to over six feet long), and the age it lives to (some can live up to 20 years). Some cities and states have even put restrictions on owning lizards: In certain places, lizards such as bearded dragons are pets you probably never realized are actually illegal to own.

Lizard venom could help us

Only a few lizards are venomous—at least that we know about—including the Gila monster, the Mexican beaded lizard, and the Komodo dragon. Lest you fear these lizards’ bite, science may have found a use for their venomous compounds. Recent research from Australia is exploring ways the venom affects certain proteins in the blood in order to treat blood clotting disorders. “By investigating the actions of lizard venoms, we can potentially use them to disrupt life-threatening blood clots, and turn these compounds into life-saving drugs,” study author Bryan Fry of the University of Queensland School of Biological Sciences, told Science Daily.

As it turns out, lizard venom might have other applications for humans as well. “Saliva from lizards contains compounds useful for treating diabetes,” says lizard expert Martin Whiting, a behavioral ecologist at Macquarie University in Australia. According to research, a compound in Gila monster venom increases insulin production, making it a naturally-derived and effective diabetes drug. Unfortunately, Gila monster numbers are dwindling. The lizard, which lives in the American Southwest, is currently listed as “near threatened.”

Californians don’t have to worry about high incidence of Lyme disease thanks to certain lizards that live there, including the western fence lizard. Studies have shown there are more ticks when the lizards are present, as the reptiles serve as hosts for the bugs. But, research has also found a protein in the lizard’s blood kills the Lyme-causing bacteria in the tick, rendering it harmless to humans. Just another reason to keep the lizards around.

Wonderful, colorful lizards are so unique not just to look at but in terms of what they can do. Here’s another example: Some lizards have green blood due to a normally toxic waste product called biliverdin, which somehow the lizards are able to tolerate in their system. Scientists aren’t sure yet about the beneficial properties of the green blood or how the lizards survive and even thrive from it; but they suspect it might have applications in humans for blood-related conditions such as malaria and jaundice, biologists explained to NPR. Who knows: This might be one of the times animals helped scientists solve big mysteries.