‘Lord of the Rings’ Was Never Funnier

Are you a Lord of the Rings fan? Have you slogged through all the books and their film versions, the 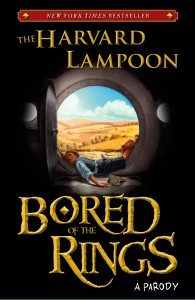 Are you a Lord of the Rings fan? Have you slogged through all the books and their film versions, the ones seemingly made to keep director Peter Jackson employed? If you are—and especially if you aren’t—have we got the book for you: Bored of the Rings.

It’s actually not new, having originally been published in 1969. But with The Hobbit coming out this December, Touchstone Books is cashing in by re-releasing this humor classic (on sale now).

Written by Harvard Lampooners Henry Beard and Doug Kenney, who went on to become the founding editors of National Lampoon (Kenney also co-wrote Animal House), the book is both a tribute to and hysterical satire of the trilogy. Characters include Frito Bugger, Moxie and Pepsi Dingleberry, Arrowroot of Arrowshirt, Legolam of the Elves of Northern Weldwood.

And for all you fans of second lunches, here’s a little ditty from the book:

We boggies are a hairy folk
Who like to eat until we choke.
Loving all like friend and brother,
And hardly ever eat each other.

Ever hungry, ever thirsting,
Never stop till belly’s bursting.
Chewing chop and pork and muttons,
A merry race of boring gluttons. 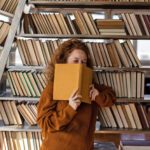 15 Punniest Book Titles That’ll Give You a Good Laugh 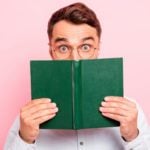 14 Times Librarians Had the Best Sense of Humor