In case you missed it: Last week, the New York Times’ Modern Love column was written by Kevin Farrell, a 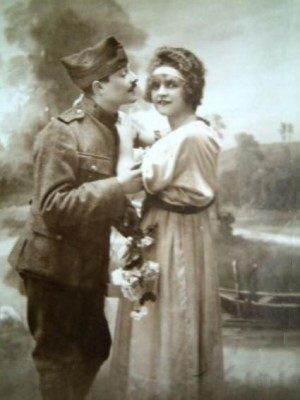 In case you missed it: Last week, the New York Times’ Modern Love column was written by Kevin Farrell, a young soldier who left behind his first love when he went to fight in Afghanistan. Reading it, you might be tempted to allow your brain to do a playlist-association and hum the Talking Heads’ anthem “Life During Wartime” (“This ain’t no party, this ain’t no disco, This ain’t no fooling around / No time for dancing, or lovey dovey, I ain’t got time for that now”). But you might stop cold when the story goes deep, as Farrell searches for his place in the world:

“The time came for me to leave, and I left. When I got to mobilization training, I figured something out. I realized that everyone belongs somewhere. Beautiful young girls who love fashion belong in New York City, at parties and bars, having fun and meeting boys. Headstrong young men who become soldiers belong on the other side of the planet, at war, shooting and being shot at. We were both where we belonged.”

Advanced questions to think about: Are you where you belong? Are you chasing your dream—and is that real? Thoughtful, well-written, touching. Read the entire essay here.

Smart Strategies for Organizing Your Kid’s Closet
70 Most Romantic Love Quotes That Will Make You Swoon
Single on Valentine’s Day? 15 Things You Can Do to Make It Amazing