It's called maple syrup taffy, and it is the candy of your dreams. Here's how it works. 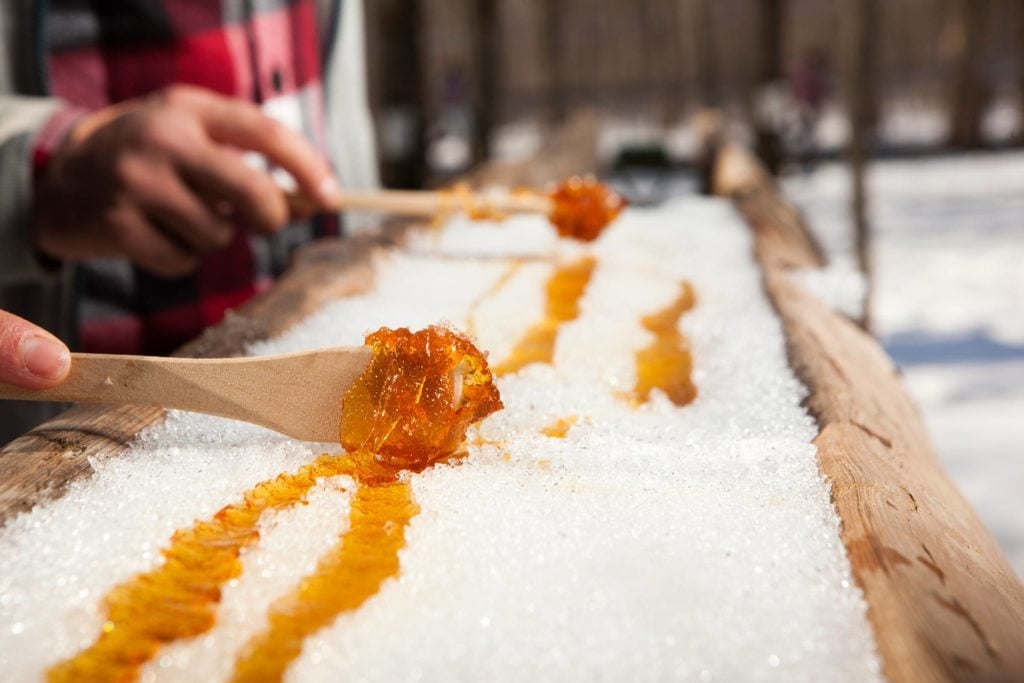 The scent of maple syrup transports me back to a time when everyone I knew in my small town in upstate New York tapped their sugar maple trees. Every March, on my way to school, I’d peek into the buckets and see the clear, watery liquid dripping in.

My most pleasant memory comes from the spring before my younger brother, Wally, and I even began school. We must have been 4 and 5 years old on the evening when Carolyn, our older sister, proposed to our mother that she take us to a sugaring off on Spring Woods farm. She knew all the farms in the area.

Much to my surprise, Mom let us go on the outing. Carolyn said she would walk us to the farm just after dark the next day.

The weather was warm for March, and farmers said the maple sap was running really heavy that year. But the next morning, it began snowing early and continued all day. Wally and I thought the snow would doom our trek to Spring Woods farm. But right after supper, Mom said to put on our warmest jackets, snowpants, boots, scarves and mittens.

A few minutes later, Carolyn showed up at the back door pulling our heavy-duty toboggan. On our farm, the toboggan was used for all kinds of chores. It could hold a load of wood for the furnace, feed for the chickens, or baskets of laundry that Mom would hang outside to freeze and semi-dry. We seldom, if ever, used it for sliding down hills.

“Hop on,” Carolyn said, “and I’ll give you a ride to the sugaring off.” What a delight! Wally and I cuddled up together. Mom tucked an old woolen blanket around us, handed us two square cake pans, and we were off. Carolyn, whistling a tune, pulled us down our country lane and out to the paved road.

The plows had not come through, so we made rapid progress on the fresh snow. Very soon, we smelled a wood fire and the scent of maple syrup. As we rounded a curve, we could see the mammoth iron kettle people were milling around. The heady smell of that boiling syrup was almost too much to endure.

When we had asked Carolyn why we had cake pans, she only said, “You’ll see.” Now she filled those pans with freshly fallen snow from the field nearby.

Carrying them over to the fire, she held them out toward a man who quickly poured hot syrup onto the snow. She then handed each of us a pan and said, “Try that.”

A golden brown layer of semi-hard maple syrup had spread on top of the snow. Removing our mittens, Wally and I pulled small pieces of the sticky candylike layer from the snow and ate it. When we asked for more, Carolyn packed fresh snow in the pans and the man ladled out more syrup for us.

For two kids who received only a small candy bar each at Christmas, it was an unbelievable treat.

Too soon, it was time to go home. We were nearly asleep as Carolyn pulled the toboggan up to the back door and Mom helped us into the house. We stumbled up the stairs to bed, where sweet memories of that delicious snow candy lingered in my dreams.