You fight over finances, right? Here's how to keep the cash and the passion. 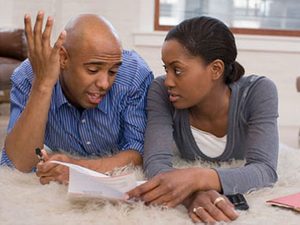 Studies have shown that disagreements over money are the No. 1 cause of friction in a marriage. And for some, they’re the No. 1 reason for divorce.

So why can some couples weather financial ups and downs while others split over a household budget? The key to success is to find the common ground—the shared values about how, as partners, you want to live your lives together. Here are some tips for executing a money plan without losing the passion.

Think big and put it in buckets. After couples have paid their fixed expenses, they often find themselves disagreeing over how to spend what’s left—pay off the credit cards or get that HDTV one of them has been craving.

To avoid such clashes, talk about your dreams. Allvine’s research says couples who don’t get bogged down with day-to-day budgeting details are usually the most successful with their money. “You can’t say to the spender, ‘Okay, you can only spend $50 a month.’ It’s like putting people on a diet where they can last for a while but then they just binge and eat a loaf of bread. The spender will say, ‘I’ll cut back.’ And then they start cutting out the extra cup of coffee. But it’s rarely the coffee that puts them in debt. It’s the home they can’t afford or the car they shouldn’t be driving.”

Allvine recommends sorting your big dreams—starting a business, owning a home, saving for a vacation—into categories, or buckets. “When you name the bucket, you know what that money is for, and you won’t use it for anything else. That’s how couples get to their goals—they pay themselves first
for the big things.”

Everyone needs the prenup talk. As today’s couples marry later, or remarry, they face big challenges combining resources. One spouse may bring children from a previous marriage; another might be caring for elderly parents. The new-think says, rich or not, you may need a prenuptial agreement. “It makes sense to think things through early on,” says Mellody Hobson, president of Ariel Capital Management in Chicago.

But Carrie Schwab-Pomerantz, co-author, with her father, Charles Schwab, of It Pays to Talk, has a different take: “Not everyone needs to sign a prenup document—but everyone should have the prenup conversation.”

The point, says Schwab-Pomerantz, is to get an idea of each other’s money personality. “If someone has a lot of debt, that can reflect some personality issues that his or her partner needs to know about. How you deal with money is a reflection of who you are as a person.”

Put your goals on paper. “When a couple can agree on their spending,” says nationally syndicated radio talk-show host Dave Ramsey, “then they have agreed on their fears, and their goals. We don’t really fight about money. We are fighting about priorities, fears and power. A plan on paper brings a level of promise and cooperation and unity.”

Ramsey also recommends scheduling regular money meetings to talk about expenses. “It’s all about being open and on the same page. There are no secret credit cards, no secret debt, no secret student loans. No deception. It’s a matter of understanding what the expenses are. How much do we have to spend on birthdays? What about the groceries and cable bills, the soccer expenses? Life starts to show up in a real way when you talk about it in a meeting and put it on paper.”

Take a hike. How and where you discuss your finances is critical to keeping the peace, says Schwab-Pomerantz. “You want to make sure both parties are in a comfortable, neutral place. It’s also important to know ahead of time what you’re going to talk about.”

Schwab-Pomerantz and her husband hike every weekend in the mountains near their home in the San Francisco Bay area. “We’re away from our kids. We’re not sitting there facing each other, which can become confrontational. We can’t get mad and walk to another room. It’s just the two of us, and we get a lot of conversation in there about our goals and our priorities in life.”

Get it together. Financial independence is empowering, but many counselors say that living separate financial lives imperils a marriage. “Having his and her money is a recipe for disaster,” advises Greenberg. “That says one person is taking care only of herself or himself.”

The joint account sends a powerful message that your marriage matters. The account should be for joint goals: building a reserve fund, saving for college. A shared account, however, shouldn’t cancel out individual accounts.

Managing your money together may not seem like a romantic venture, says Greenberg. “But if there is a good financial foundation, there are a lot fewer issues for strife.”

As for the couple seeking financial-aid advice from Greenberg, they left his office, smiling, after he proposed a novel solution. The path to financial happiness is clear: communicate and plan together.