Matterhorn: A Novel of the Vietnam War

Matterhorn takes on this big theme of futility in war beautifully as it applies to the Vietnam War, and is also a masterpiece of details. 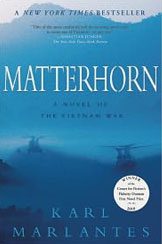 Modern American war novels, including Kurt Vonnegut’s Slaughterhouse Five, Norman Mailer’s The Naked and the Dead and Tim O’Brien’s The Things They Carried, often cast a cool eye on the traditional notion of heroism, given the absurd conditions under which they are often fought. Matterhorn, published in 2010 and released in paperback this spring, takes on this big theme of futility beautifully as it applies to the Vietnam War. But it’s also a masterpiece of details. In his first novel, author Karl Marlantes, a highly decorated Vietnam veteran himself, takes us deep inside the life of the men who ascend a hill to build a fort (called Matterhorn) that they are later required to attack once it has been taken over by the Viet Cong. “Here is story-telling so authentic, so moving and so intense, so relentlessly dramatic, that there were times I wasn’t sure I could stand to turn the page,” wrote Mark Bowden, author of Black Hawk Down: A Story of Modern War. “As with the best fiction, I was sad to reach the end.”

16 Best Podcasts for Kids Even Adults Will Love

30 Thriller Books That Will Keep You on the Edge of Your Seat
The 25 Best, Most Iconic Short Stories of All Time