Me and the Supreme Court

Moments like this create the memories of a lifetime. 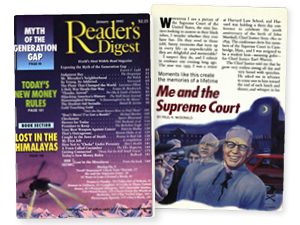 Whenever I see a picture of the Supreme Court of the United States, the nine Jus­tices looking so austere in their black robes, I wonder whether they ever have fun. Do they revel in those odd, funny moments that turn up in every life—as unpredictable as they are delightful and memorable?

I suspect they do, and I submit in evidence one evening long ago. The year was 1955. I was a senior at Harvard Law School, and Har­vard was holding a three-­day con­ference to celebrate the 200th anniversary of the birth of John Marshall, Chief Justice from 1801 to 1835. The conference drew five members of the Supreme Court to Cam­bridge, Massachusetts, and I was assigned to be a student host—meaning gofer—for Chief Justice Earl Warren.

The Chief Justice told me that he grew very restless sitting all day and very bored with speeches. He asked me in advance to come over to him toward the end of each lunch and dinner, and whisper in his ear as if giving him a message. He would then rise, make his excuses to the group, “and you and I will go for a nice long walk.”

We had many conversations that week as we strolled the back streets off Harvard Square. He had been governor of California and Repub­lican nominee for President, and he had the political knack of treating even a lowly law student as an equal.

On the last night of the confer­ence, Chief Justice Warren came to me at about 11:30. “Paul, I’m bushed,” he said. “Can you drive me back to my room?”

“Certainly, sir,” I replied, a little nonplussed. “I’ll just go get the keys.” I owned only a bicycle, and I instantly presumed that the Chief Justice did not expect to ride through Harvard Square at midnight on my handlebars. I scurried to the assistant dean and explained my predicament.

“Here, take my station wagon,” he said, handing me the keys. “It’s at the bottom of the back stairs.”

I returned to Chief Justice War­ren, and we proceeded toward the exit.

“Harold,” said the Chief Justice, “care for a ride?”

“Sure do,” said Mr. Justice Burton.

By the time we reached the exit door, I recall that the Chief Justice had also recruited Justices Hugo Black and Tom Clark. I had a major­ity of the United States Supreme Court in tow, all talking at once.

But when we stepped out the door to the parking lot, the jurists grew silent. There before us was the assistant dean’s station wagon, an aging red Nash Rambler. One of Detroit’s first efforts at downsizing, it looked like the fire chief’s car in a destitute New England village.

Suddenly it struck them all as funny. After a week of presenta­tions and seminars, the Justices became like schoolboys on vacation. They peeled off their tuxedo jack­ets and piled into the Rambler. As I drove out of the parking lot, the rear bumper scraped mightily on the sidewalk. One Justice doubted aloud whether the canting Rambler could hold up against “the weight of the Court.” Another opined that “this vehicle would stabilize, Felix, if you would dissent your way out of it as you did in the trade-­union case.”

When I stopped for a red light, the Chief Justice, in the front seat beside me, leaned over. “Paul,” he said, “do you know where the Har­vard Business School is?”

“My son went there, but only for a year, and I never did get to see the place. Would you be willing to give us a quick tour now?”

“Hey, gents,” Chief Justice War­ren called over his shoulder. “Mind taking a look at the Harvard Busi­ness School on the way home?”

“By all means,” they replied.

So it came to be that I gingerly steered onto the grounds. The cam­pus looked deserted in the moon­light. I was reciting what little I knew about the place when I heard an ominous flub­-flub­-flub from the right rear wheel.

The Justices were out of the wagon as fast as I was, looking at the flat tire and chuckling. “It’s only flat on the bottom,” volunteered one. “Just turn the wheel halfway round and we’ll be all right.”

I took off the coat of my only suit, rolled up the sleeves of my best white shirt, slid underneath the car—and rapidly came to the conclusion there was no way that a Nash Ram­bler could be raised by its jack, no matter what angle I tried. Meanwhile, my passengers—as in their professional lives—were quite free with their opinions.

After what seemed an eternity, I looked up to see a Harvard police car drawing up beside me. Its pow­erful searchlight was fixed on my face.

“What’re you guys doin’ here?” a gruff voice bellowed. Two policemen got out and sauntered up to us. The fat one, with three gold stripes on the sleeve of his blue uniform and a large brass badge at the front of his peaked cap, was plainly accustomed to command. “Who’re you guys anyhow?” he demanded.

From the pavement, I gazed up at the cop through the bright beam of his searchlight. “Officer,” I said, “you would not believe who we are.” “Well, try me out, sonny,” he said sharply, “and you’d better do it damn fast, because I’m about to run you in.”

“OK, sir,” I said, savoring the moment, “this is a majority… of the United States Supreme Court.”

“A smart guy, huh,” shouted the policeman, stepping toward me. “You’re under arrest, smart guy, and we’ll just see how smart you are down in the lockup.”

As the cop reached to grab my neck, Chief Justice Warren stepped forward. “I wouldn’t do that, Officer, if I were you.” Ever the political pro, he smiled and placed his left arm around the policeman’s shoulders.

“I want you to put that light on my face instead of Paul’s,” he said. As the other officer retrained the light upon that famous face, Warren continued: “You may recognize me better than you do my young friend. I’m Chief Justice of the United States Earl Warren.”

He extended his right arm to the four men in shirt sleeves stand­ing nearby. “I would like to present to you Mr. Justice Felix Frankfurter, Mr. Justice Harold Burton, Mr. Justice…” and so on. One by one, the Justices smilingly shook the officer’s hand. The fat police­ man’s jowls sank to his chest. His eyes were marbles.

“We are delighted that you came along just now,” the Chief Justice continued. “Paul doesn’t know a thing about changing a tire. And we’re just a bunch of judges. We will appreciate it tremendously if you and the other officer will get down there and change the tire for us. It’s past our bedtime.”

Stunned, the two officers removed their coats and got about the busi­ness of changing the tire.

I rose from the pavement, feel­ing ten feet tall. But I was still looking up at the Chief Justice of the United States, whose eyes crin­kled into a wink as a majority of the Court stood by, smiling.

Surely, I felt, never in its long history had the power and the majesty of the United States Supreme Court been more gloriously demon­strated. And surely, never had its down­-to­-earth good humor been more amply demonstrated. Whether you’re a struggling student or a Jus­tice on the nation’s highest court, it’s such moments that create the memories of a lifetime.

The 2-Day Diabetes Diet: What to Eat to Lose Weight
13 Sweet Vintage Letters to Santa—from Almost 100 Years Ago
The Charming Stories of 18 Timeless Vintage Outfits