Rosie was a "failed" service dog who finally found her calling in the courtroom.

The day that 15-year-old Jessica was to testify against the man she said had raped her, the teen arrived at the courtroom early and was joined by Rosie, an 11-year-old golden retriever. The pair took the stand before the trial began so that the jury wouldn’t see Rosie and be influenced by her presence.

“Jessica was petting Rosie throughout her testimony,” says David Crenshaw, the clinical director of the Children’s Home of Poughkeepsie, where Jessica was living. “At one point, she took off a shoe and buried her foot in Rosie’s fur.”

When the prosecutor asked Jessica if the man who had raped her was in the courtroom, she froze. Then Rosie put her head in Jessica’s lap, and Jessica was able to lift her hand and point to the man.

On that day in June 2011, Rosie became the first courthouse dog in New York State.

Bred by Dale Picard and his wife, Lu, who together founded and now run Educated Canines Assisting with Disabilities (ECAD), Rosie was meant to become a service dog. But within months, “it was clear that wasn’t going to work,” says Picard. “It took 90 days to teach her how to turn the lights on.”

Instead, Rosie began to spend her days at the Green Chimneys school in Brewster, New York, where Picard noticed Rosie’s talent for soothing children. “Rosie’s great gift was knowing when children were stressed,” he says. “She would go to them to comfort them.”

Over the next eight years, Rosie gravitated to the speech- and occupational-therapy rooms. The students were encouraged to talk by giving Rosie one of 80 verbal commands she knew. In physical therapy, the students would race after her over obstacles.

Eventually, she found her way to Courthouse Dogs, an organization founded by a former Washington State prosecutor and a veterinarian who was dedicated to training dogs to help crime witnesses stay calm.

As Jessica’s trial approached, Crenshaw heard about the organization and reached out, hoping it would enable the traumatized teen to share her story.

“Trauma shuts down the verbal areas of the brain, and anxiety interferes with access to memory,” explains Crenshaw. “A dog’s presence reduces a stressed person’s heart rate so that a witness doesn’t freeze on the stand.”

For three months, Jessica and Rosie prepared for the trial by playing together. Rosie had to learn to tolerate the tight space of the witness box, so her handler made Rosie sit in front of a barrier that was gradually moved closer to her until it simulated being in the box. “Two days before the court date, we still didn’t know if she could handle the space,” Picard says.

With Rosie’s help, Jessica stayed calm, and the jury found the defendant, a member of Jessica’s family, guilty.

Sadly, Rosie passed away last year, but after the trial, Crenshaw adopted Rosie’s younger sister, Ivy, as the in-house therapy dog at the Children’s Home.

“Troubled children will get down on the floor with her during a therapy session, and the next thing you know, they are recounting the horrors of their lives,” says Crenshaw. Even staff members pet Ivy when they’re stressed. Says Crenshaw, “It’s impossible to be with her and not feel calmer.” 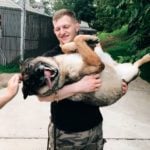