Mel Brooks: His Favorite Joke and Other Funny Stories

A rare interview with the legendary Mel Brooks as he looks back on his funniest moments. 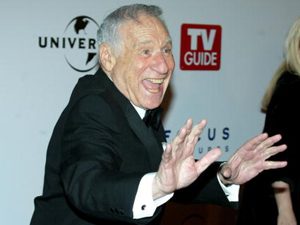 Frederick M. Brown/Getty ImagesSuddenly, Mel Brooks is hot … again! At age 86, the writer/director of such comedy classics as The Producers, Blazing Saddles, and Young Frankenstein, is being honored all over the place. PBS featured him in an American Masters Broadcast which will also be released on DVD by Shout Factory. And he was recently honored by Twitter and Comedy Central. After witnessing all the hubbub, we thought, Hey, we want in on this, too! So we called Mel. He’s exactly what one would hope Mel Brooks would be: great company. He also told some good stories.

Mel’s worked with a lot of crazy people
The craziest was Sid Caesar, who I worked for on Your Show of Shows. One day, after a show in a Chicago nightclub, we go to his suite. He’s drinking vodka, smoking cigars, and he’s very unhappy with the way two or three jokes worked. Unfortunately, I wrote them, so… We clean up two of the jokes, but the third one we can’t fix. And he keeps drinking and smoking. Now it’s like three in the morning and the cigar smoke is suffocating me. I say, “Sid, I need air, I can’t breathe.” He says, “Air? You want air?” He throws open a window, grabs me by the collar. Grabs me by the seat of my pants, lifts me up, and dangles me out the window. I’m looking at the tops of taxi cabs going by. He yells, “Do you have enough air? Are you happy?!” And I shout back, “Oh, yeah, plenty, plenty!” He hauls me back in and we finish the last joke. I never complained again.

Next: Then there was Gig Young in Blazing Saddles…

Then there was Gig Young. In Blazing Saddles I had something to say. I didn’t just want it to be a bunch of guys farting around a campfire. I wanted it to be about a black guy being accepted in the old West. I wanted the movie to have grit and humanity. So I hired the great Gig Young to be the Waco Kid, the first real friend to the black Sheriff. The day we’re shooting his first scene, Gig is in a jail cell recovering from a binge from the night before. Suddenly, he starts spitting up green stuff—bright green. I’m impressed. I turn to my assistant director and say, “Look what a great actor he is! How much he’s giving to the scene!” I look back, and now it’s a torrent of green spittle. He’s spewing green spittles everywhere. It’s like the Exorcist. Now I think he’s not acting, he’s dying. We call an ambulance, and they take him away. Turns out he was an alcoholic and had the DTs. That’s when I called Gene Wilder to take the role.

The Blazing Saddles that almost was:

Mel’s favorite joke
My favorite joke is very, very cheap. I love it because it’s typical of a Borscht Belt opening monologue, the kind a “Jackie” or a “Bernie” would tell. The joke is: “Good evening, ladies and gentlemen. I met a beautiful girl last night, but she was rather thin. I mean this is a skinny girl. You never saw anybody so thin. She turned sideways you didn’t see her. I took her to a restaurant and the maître ‘d said to me, ‘Check your umbrella?’” That was my opening joke when I played the Catskills. Cheap, but effective.

Carl and Mel talk about cheese:

Next: At war with Mel…

Mel’s funniest war story
I was a corporal in World War II. One day, I took eight guys out on a scouting mission, and we found a box of German rifles. Nearby, there were telephone polls with the ceramic insulators at the top. So I say, “A buck a piece—whoever can knock off the most insulators gets the pot.” We grab the rifles and start shooting. Somebody from Arkansas—they know how to do it—knocked off all of them and gets the nine bucks. When we get back to our base, sirens are going off. Everybody’s running around. I see my sergeant and ask what’s going on. He says, “Communications have been cut off between the 7th Army and the 26th Corps. All the telephone lines are down. We think there are snipers and we’re getting a patrol together to find them.” Now, I’m a little scared. I know exactly who’s at fault. So I said, “Okay, count me in.” and out I went again. We never did find them.

Andy Simmons
Andy Simmons is a features editor at Reader's Digest.
Now Trending
21 Best Deals on Halloween Candy in 2022
Now That His Kids Are Grown, This Dad Is Giving Up His Dad Jokes
150 Mom Jokes for 2022 That Are Funny Because They’re True