Daryl ChenUpdated: Apr. 15, 2016
From the book The Book of Joan: Tales of Mirth, Mischief, and Manipulation

We think it's fair to say that there will never be another mom quite like Joan Rivers. Read these unbelievable anecdotes from her daughter Melissa Rivers—and laugh!

Charles BushCan you imagine what it would be like to be raised by the legendarily over-the-top Joan Rivers? Well, wonder no more—in the newly released The Book of Joan: Tales of Mirth, Mischief, and Manipulation (Crown Archetype), Melissa Rivers shares her very singular life as the comedian’s only child. While the two went on to become colleagues, sharing the screen in TV shows like Fashion Police and Joan & Melissa: Joan Knows Best, Melissa’s most significant role was as her mother’s biggest fan. Here, she shares seven anecdotes that showcase Joan Rivers’ most unusual maternal style.

1. Having Joan as a mom means you’d have to initiate breakfast conversations like no other.

Joan Rivers was obsessed with death. When Melissa was young, she’d eat breakfast with her parents in the mornings. Her father would read every section of the newspaper. Her mother read only one part—the obituaries—and then she and her daughter would play the Joan Rivers version of “if you eat your vegetables, I’ll put a piece of candy in your lunchbox.” In their case, Joan would read part of it an obituary, and Melissa would have to guess facts about the deceased. For every fact she got right, Melissa would get a Kit Kat or a gummy bear.

2. Joan made sure her daughter was in on the gag—or was the gag itself.

Nine months after Melissa was born, Joan Rivers and husband, Edgar Rosenberg, dressed up their baby in her finest clothes and had their nanny deliver her to Johnny Carson as a birthday gift. They attached a note that read: “We wanted to thank you for everything you’ve done for us, so we’ve sent you our most prized possession, our daughter, Melissa. FYI, she doesn’t like Brussels sprouts; they make her windy.” Johnny cradled the infant for a while—and then returned her to her parents.

3. Watching Joan was like having a master class in learning how to get what you wanted.

According to Melissa, Joan was a pro at dealing with people—she could charm, wheedle, or negotiate anything from anybody; and if those methods failed, she’d use her wits. For example, Joan never felt like hotel rooms were well lit enough and she always wanted extra lamps. She’d call the concierge, who would usually say that there were not any extra lamps available. To which Joan would reply: “Are you telling me that if the President of the United States came to this hotel and asked for an extra lamp, you wouldn’t get him one?” and the concierge would murmur that if that were the case, he’d locate one. Joan’s retort: “Well, I promise you he’s not coming; you can safety give me that lamp.”

Before Melissa could recite the Pledge of Allegiance, she knew something far more important by heart: Joan’s nightclub act. Her mother took her on the road whenever she played Vegas, and Melissa would help run lines with her in her dressing room before a show. Then, when Melissa was in fourth grade, Joan—who was a true-crime devotee—read her daughter In Cold Blood, Truman Capote’s nonfiction account of the murder of the Clutter family, as a bedtime story.

5. Thanks to Joan, she—and Melissa—never left a flight empty-handed.

Melissa writes, “My mother loved airline food, so to her, [flying] first class was a five-star restaurant.” Joan would eat her meal and the remainder of Melissa’s meal and that of anyone else they were traveling with; if anything remained, she’d ask for it to be bagged up for her dogs. Joan became so well known for doing this that when Melissa was traveling solo and took the American Airlines red-eye from LA to NYC, the flight attendants would hand her a bag of leftovers to bring to her mom.

6. As Joan’s daughter, Melissa was on the receiving end of peculiar gifts.

Once, Melissa (who, by then, was an adult) received a very generous anonymous gift: A fur coat. Melissa was known to be anti-fur—she even did work for animal-rights organization PETA—so she was puzzled about why anyone would send her such a present. Her mother, who was in the room at the time, knew Melissa’s antipathy to fur and exclaimed over the coat’s beauty. She slipped it on, and it fit perfectly, almost as if the garment had been made for her. When Melissa noticed that the inside of the coat was monogrammed with Joan’s name, she realized what her mother had done. Joan feigned offense and said, “I am hurt and appalled that you would think that—and I’ve buried the cost so deep in the books you’ll never be able to prove it.”

7. Til the end, Melissa never knew what might come out of her mom’s mouth.

Up until she passed away at age of 80 in 2014, Joan Rivers was always working, whether taping TV shows, interviews, and commercials; doing stand-up gigs; or producing her jewelry line for QVC. After a lengthy day filled with non-stop activity a couple of years ago, Joan retired to her bedroom in Melissa’s house. Melissa followed her and told her mom that she was quite frankly worried about her: Joan’s schedule was too strenuous and she needed to slow down. As Melissa spoke, Joan was lying on her bed in her bathrobe, her eyes closed. Melissa, thinking her exhausted mother had dozed off, tapped her and said, “Mom?” Joan said, “Melissa, please! I’m practicing visualization techniques, and I’m seeing myself as the face of Depends.” 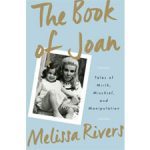 You can find many more stories of life with Joan in The Book of Joan: Tales of Mirth, Mischief, and Manipulation (Crown Archetype).