Your Guide to a Million Dollar Highway Road Trip

Take in stunning views and a trip through mining history on one of Colorado's most thrilling and dangerous roads.

A 25-mile stretch of paved highway nestled high in Colorado’s San Juan Mountains is considered one of the most dangerous roads in America—and one of the most eye-poppingly scenic. Known as the Million Dollar Highway, it traverses the rugged beauty between Silverton and Ouray on a narrow, twisty road practically guaranteed to elicit gasps of awe, fear, or possibly both. It’s easy to see why it made our list of the best road trips in America. Here’s what you need to know if you’re thinking of checking it out.

The Million Dollar Highway is just a small portion of the 236-mile San Juan Skyway, itself a section of U.S. Highway 550, which runs 305 miles from Bernalillo, New Mexico, to Montrose, Colorado. Silverton is just 50 miles from Durango, making the drive a must-do for anyone visiting the southwestern corner of Colorado—anyone with a taste for adrenaline, that is. If you’re coming from Denver, expect about a six-hour drive to Durango, or six-and-a-half to Silverton. Do you love this idea but live on the East Coast? Consider a White Mountains of New Hampshire road trip until you can make it here.

Why is it called the Million Dollar Highway?

At least four theories offer explanations for the nickname. The region was once a hotbed of mining activity, and according to one legend, the gravel used to build the road contained gold and silver tailings worth a million dollars. Others say the name originated when locals proclaimed that they wouldn’t drive the road even for a million dollars. Then there’s simply the notion that the exhilarating drive offered million-dollar views.

But the real reason, according to several sources, is much more mundane. During a planning meeting in 1921, when discussions centered on the logistics of rebuilding what was then still a stagecoach road, one person commented that it would cost a million dollars. He continued to refer to it as “this million-dollar highway,” and the moniker stuck. 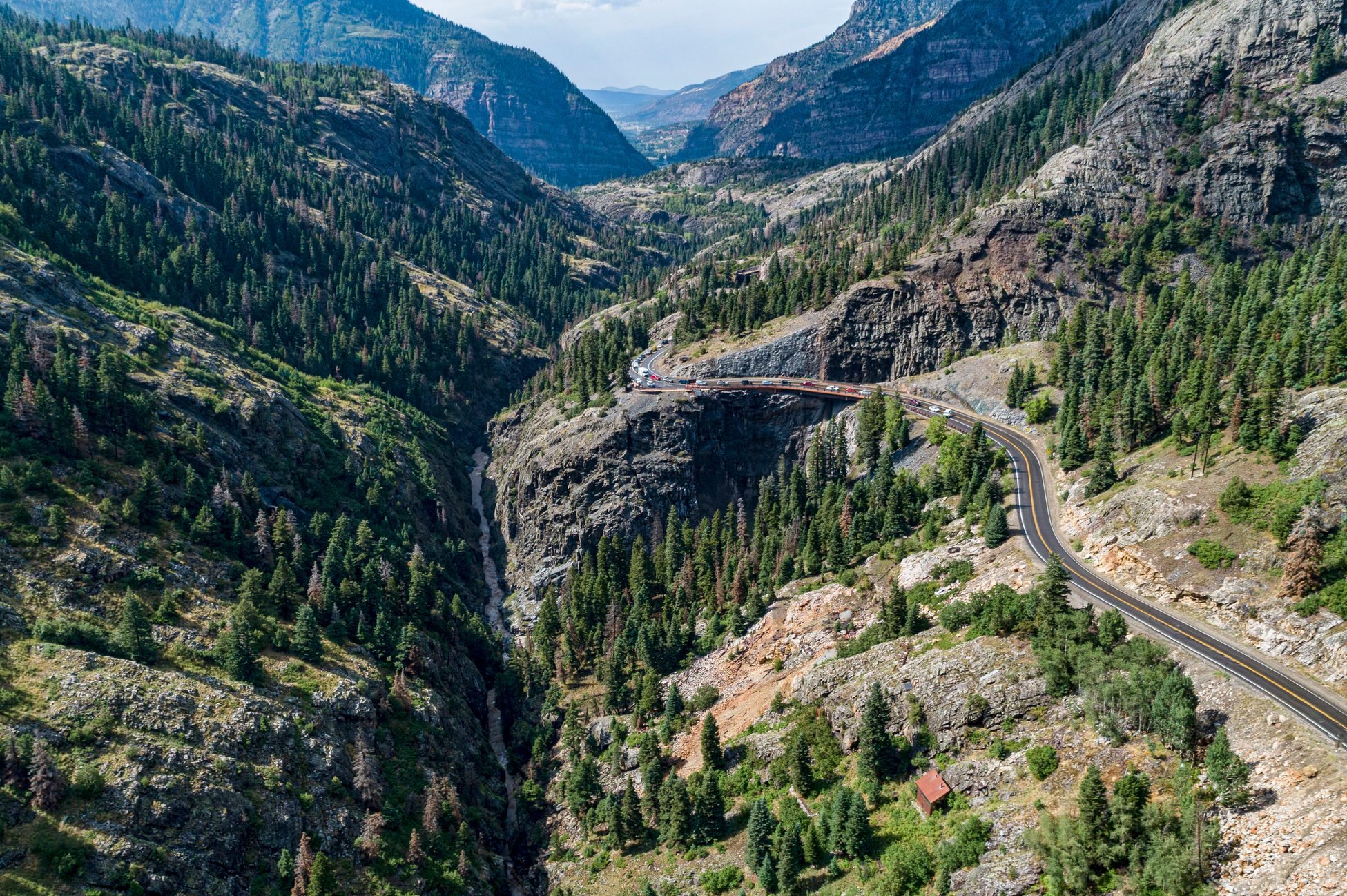 When was it built?

Construction started in 1880, when it became apparent that miners and prospectors needed a way to travel between the lucrative gold and silver mines in the Red Mountain district and the nearby towns. But in 1882, the Ouray and San Juan Wagon Company ran out of money. That’s when Otto Mears, an entrepreneur who had already begun building a network of roads in the area in the 1870s, purchased a majority interest in the company. Mears and his crews began blasting through solid rock, at an actual cost of up to $40,000 per mile. When the 8.5-mile road was completed in 1883, it included a toll gate, where Mears charged $5 for a wagon and team of horses, $2.50 for a trail wagon, and $1 for saddle animals. (That $1 in 1883 is equivalent to nearly $26 today.)

Later that decade, Mears extended the highway twice, and in 1910 (or, by some accounts, 1911), a doctor making a house call in a Model T was the first person to drive an automobile on the road. In 1924, the Colorado Department of Highways took over the road and improved it for car travel. It was completely paved by 1935.

The paved, two-lane road climbs approximately 2,000 feet from Silverton to its summit at Red Mountain Pass and then drops another 3,000 feet en route to Ouray. The terrain is mountainous, and the road is riddled with dozens of hairpin turns. Even though those switchbacks help drivers gain altitude, the road can be steep, with a grade of up to 8 percent at times. The outside edge of the road hugs the sheer drop-offs to the valley below. 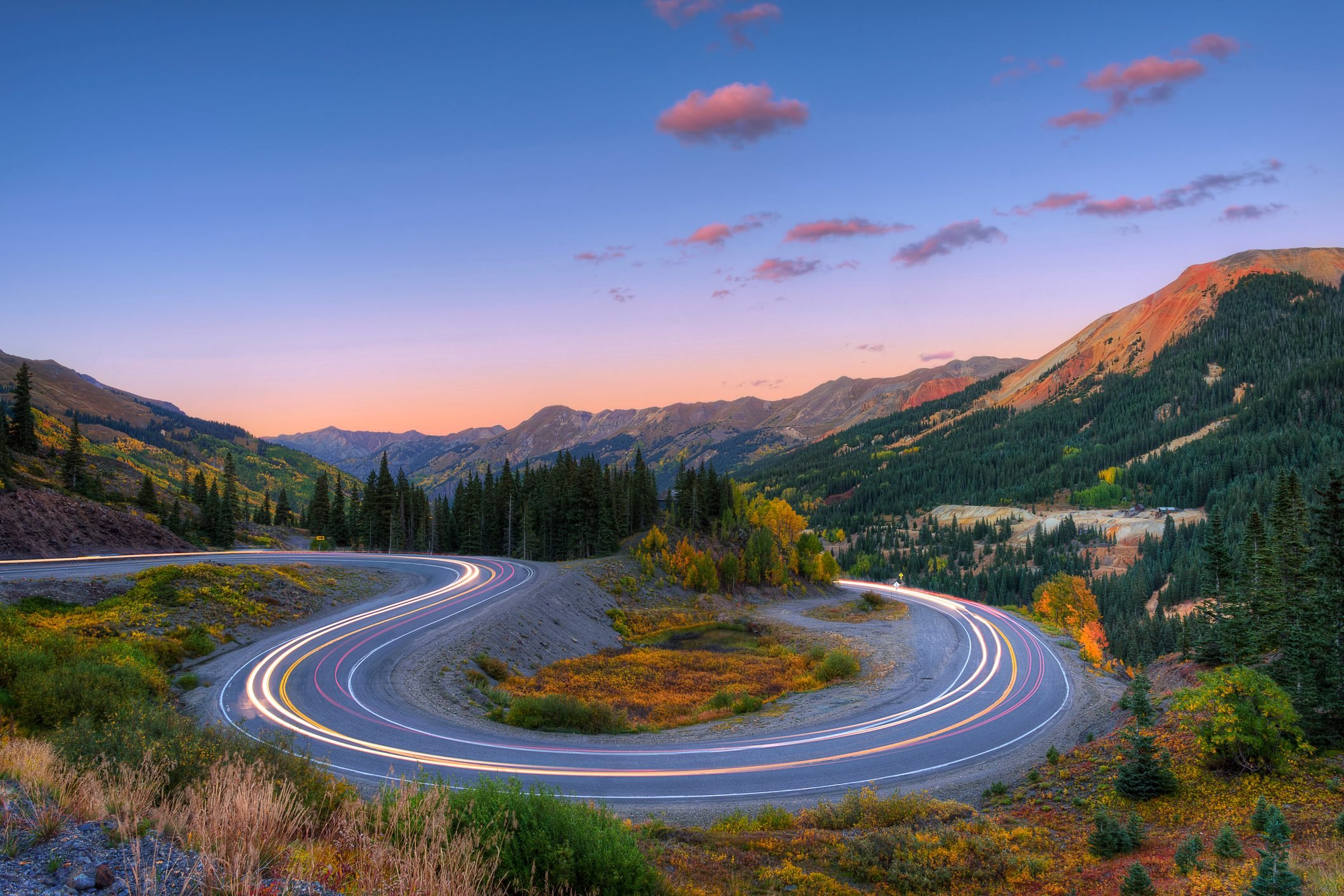 Most people recommend that first-timers—or those prone to white knuckles—begin the drive in Silverton and motor north to Ouray. That way, your vehicle will be on the inside lane, closer to the mountain than to the cliff edges on the outside lane. Even so, you’ll want to let your passenger do the gasping and gawking while you keep your eyes trained on the road. You can switch places for the return drive. You’ll also want to make sure that you have the right car for this road trip.

As you make your way out of Silverton, the highway soon enters the San Juan National Forest. Encompassing 1.8 million acres, it’s the largest national forest in America, and it’s home to incredible biodiversity. It hosts 23 varieties of evergreens, and wildlife that includes bighorn sheep, black bears, elk, deer, and mountain goats; the promise of possible sightings is another great reason to remain as alert as possible on this road. (But hold off on the coffee—there are no restrooms, gas stations, or other services on the Million Dollar Highway.)

As you wind your way north, you’ll be rewarded with vistas of shimmering lakes, plus wildflowers and waterfalls in summer, and quaking golden aspens in the fall. (If you’re a leaf-peeping enthusiast, check out our guide to New England fall foliage.)

Along the way, you’ll see remnants of historic mines, as well as ghost towns that once housed the people who worked in them. Some of the most captivating highlights of the drive include: 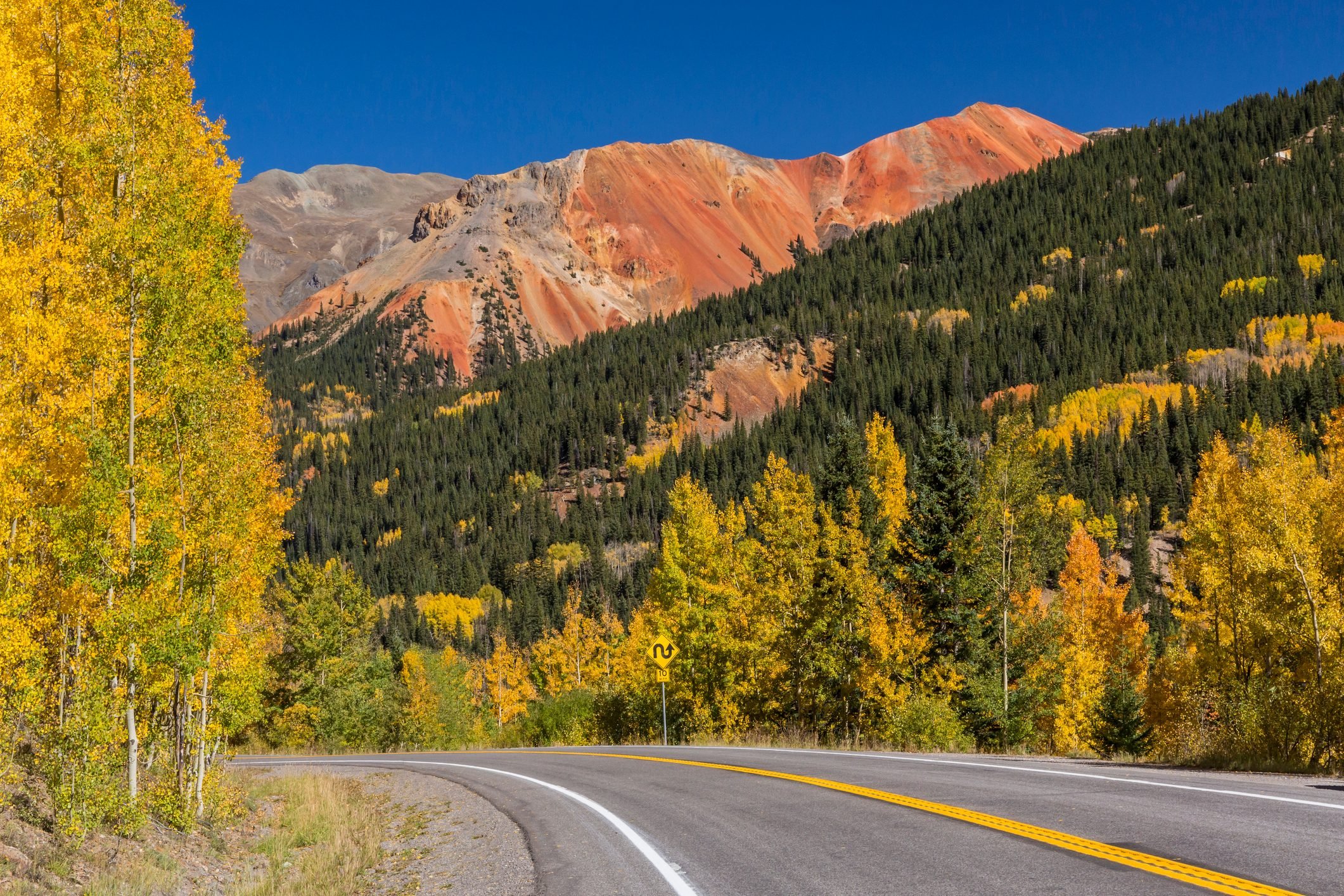 At an elevation of 11,018 feet, the air here is rarefied indeed. But the payoff is huge—you’ll have breathtaking views (literally!) in all directions when you reach this summit. Several pullouts at the top make it convenient to stop and snap some photos of the incredible panoramas. If it’s clear, you should be able to see all three of the aptly named Red Mountains. You’ll also be able to glimpse the remains of several mines, including the Longfellow Mine, Yankee Girl, and later, the Idarado, the largest mine ever to operate in the San Juans.

From Red Mountain Pass, you’ll begin your descent through this steep chasm between Bald Mountain and Telluride Ski Resort, carved by the Uncompahgre River’s fast-flowing water—the same water that creates Class III and IV rapids for whitewater adventurers. The river’s Ute name loosely translates to “dirty water,” because of the green, yellow, and orange hues the water sometimes has, thanks to heavy mineral content. This part of the drive is widely considered the most spectacular—and the scariest. Be sure to stop at the overlook above Bear Creek Falls, a 227-foot cascade of water that ultimately crashes into the river below, before you continue on to Ouray. If this sounds right up your alley, you should also plan a Tail of the Dragon road trip in North Carolina and Tennessee—another bucket-list drive for thrill-seekers.

Many of the mining towns that enjoyed prosperity during the gold and silver rush have long since been abandoned. You can still walk around them, but be sure to exercise caution. Two of the most accessible are:

How long does it take to drive? 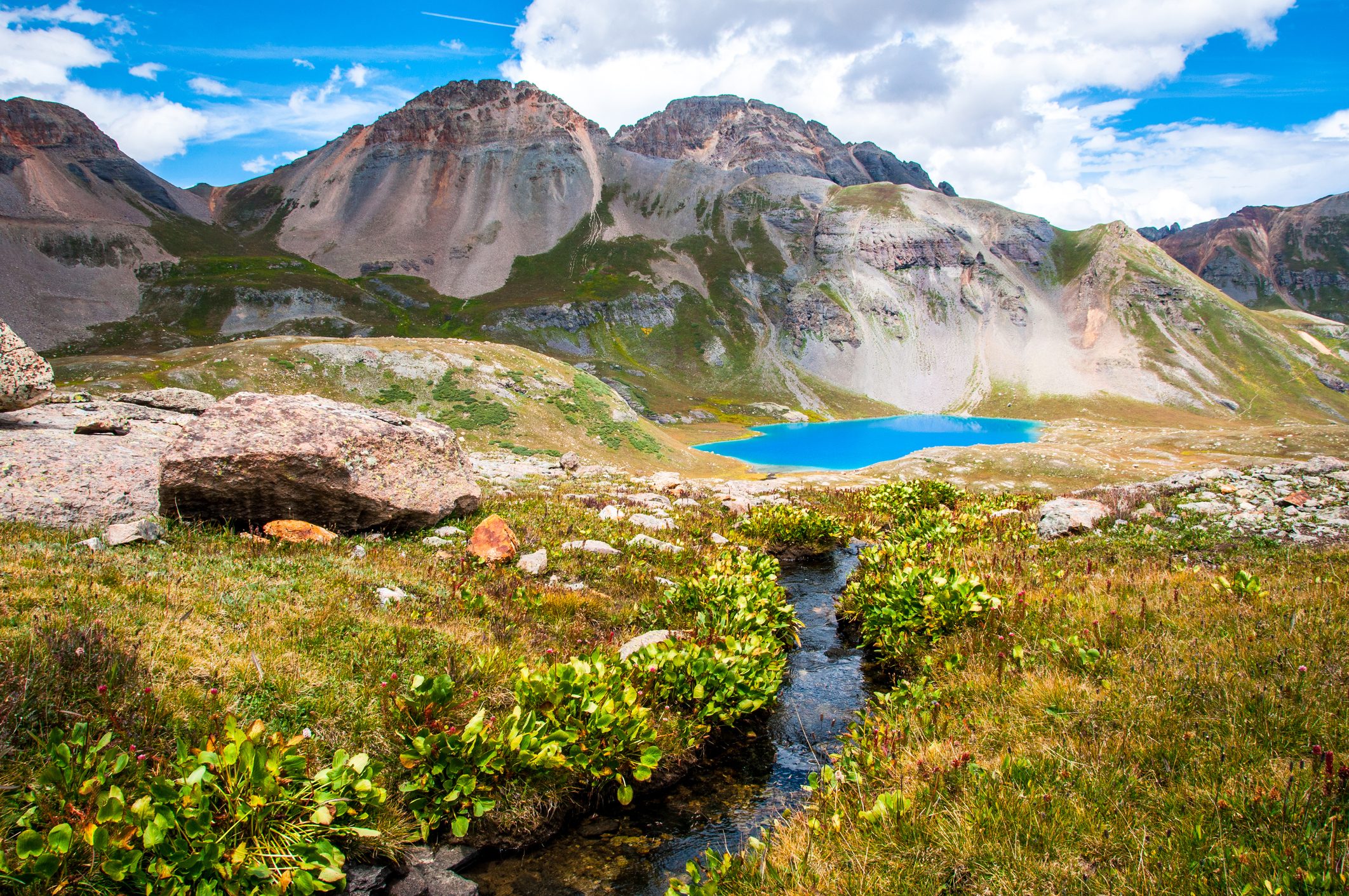 Though this stretch of road is only 25 miles, it takes about 45 minutes to drive in dry conditions, if you stick to the posted speed limit of 25 mph (and 10 mph around many of the hairpin curves) and don’t make any stops. Most people, however, will want to take at least a couple detours, whether to explore a nearby mine or ghost town, or stretch their legs and relax their nerves on a short hike to an alpine lake. If you don’t want to feel rushed, plan on a few hours. Here are some other road trip planning tips you’ll need before you go.

It can be. About 40 accidents occur each year, with an average of seven fatalities, on the Million Dollar Highway. Keep in mind that the original road was built for stagecoaches and horses, and the 1920s update followed much of the original route. The frequent switchbacks mean drivers need to be alert at all times, especially since most of the road lacks guardrails of any kind. (The area receives some 300 inches of snow each year, and guardrails prevent snowplows from pushing the accumulated flakes onto the already narrow shoulder and down the cliffsides.) The road turns especially perilous when wet or icy, so drivers will want to avoid it in winter.

Rockslides, mudslides, and avalanches are also possibilities (though the last time anyone was killed by an avalanche here was in 1992, thanks to improved mitigation practices). Even in summer, motorists need to be aware of frequent afternoon thunderstorms. Red Mountain Pass can close without warning if adverse weather conditions threaten safe travel. It’s smart to check pass conditions before you head out, so bookmark Snoflo.

All that said, almost any modern vehicle—including RVs—should be able to complete this thrilling drive in favorable weather, as long as everyone exercises caution.

The towns at either end of the Million Dollar Highway are worthy of visits in their own rights. 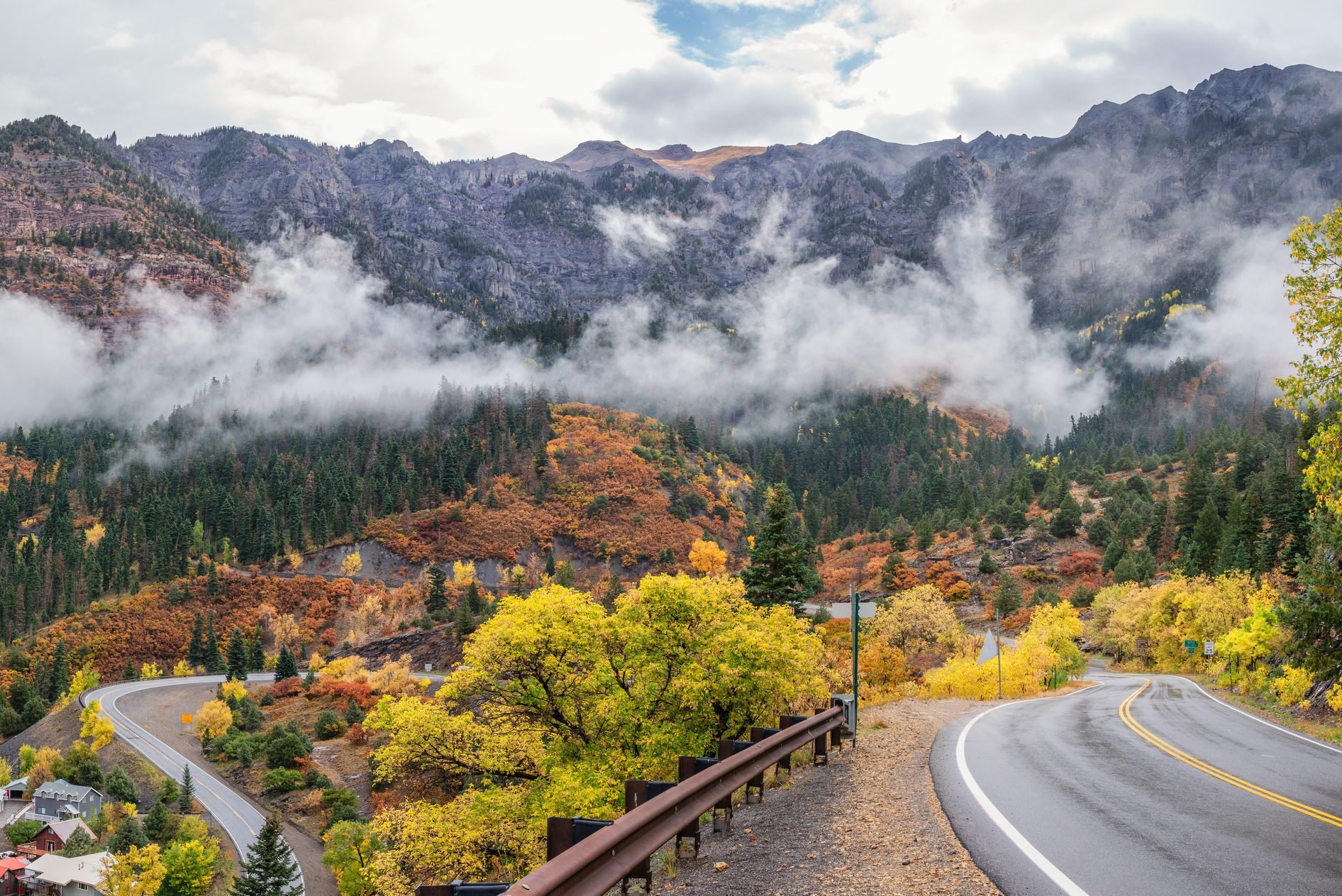 This charming mountain town, home to just over 1,000 people, is surrounded by the San Juan Mountains, making it easy to understand how it earned its nickname, “Little Switzerland.” Less easy: saying “Ouray” correctly. If you want to score points with the locals, you’ll learn that it’s correctly pronounced “Yer-ray.”

Box canyons, waterfalls, hot springs, and hiking make this a favorite destination for Colorado residents and visitors alike, even if it does require a nail-biting drive to get there. If you’re feeling super adventurous, try some ice climbing at Ouray’s Ice Park, which boasts more than 100 routes, all free to visitors.

Silverton’s main point of interest is the Durango & Silverton Narrow Gauge Railway, which operates a 52-mile ride on a historic steam-operated locomotive through the San Juan National Forest. This scenic train ride is a terrific way to experience the landscape without putting yourself in the driver’s seat. It operates spring through fall, but the current COVID-19 pandemic may limit its operation for the coming season, so definitely check before you go.

You can also engage your inner prospector in Silverton with a tour of the Old Hundred Gold Mine. Or, if you’re anxious to get started on your million-dollar drive, simply take a short stroll around the town for a glimpse of its Old West origins, including miners’ cabins and a brick jail built in 1903, which intermingle with modern shops and restaurants.

Audiobooks for Your Next Family Road Trip

How to Fix a Clothes Dryer That Isn’t Drying
Can’t Sleep on Vacay? 17 Tips to Snooze Better When Traveling
I Thought a Stranger Was Going to Rob Us on Vacation. What He Did Next Changed My Heart.