How I Learned to Love Mom’s Rhubarb, and the Sturdy Life Lesson It Taught Me

I didn’t appreciate the tangy taste of rhubarb until I was all grown up. 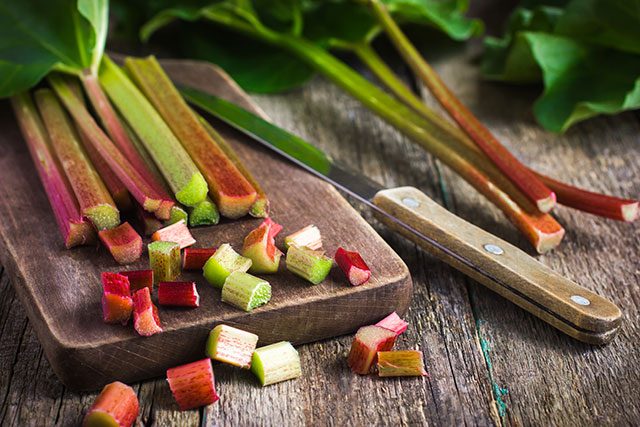 Mothers love to offer sage advice to their children: It’s better to give than to receive. Look before you leap. A penny saved is a penny earned. My mom imparted this wisdom to me along with some of her own: “Nothing beats a good bite that bites back.” She was referring to her penchant for bitter-tasting foods like dill pickles, sauerkraut, and rhubarb.

Festooned with giant leaves atop blushing rosy stalks, Mom’s rhubarb plant resides east of the heirloom peonies in her backyard. Grandma transplanted it there from the farmstead. But since childhood, I’ve regarded it as an overgrown weed.

Like weeds, rhubarb grows rampant. It flourishes throughout the countryside, thriving with orange poppies alongside weather-beaten barns. Rhubarb even takes root in city backyards like ours, where it has prospered.

On a half-acre, we tended the largest garden in the neighborhood. Each growing season, we shared the bountiful rhubarb, tomatoes, beans, beets, cucumbers, carrots, and peppers with our neighbors and friends. The rhubarb in particular was taken in by more families than any other foster fruit.

Nearly three years ago, while weeding Mom’s flower bed, I finally asked if I could dig out her rhubarb. After all, she didn’t bake with it anymore. “Absolutely not,” Mom gasped, throwing me a look sharp enough to etch glass. Clearly I had underestimated her devotion to the so-called “pie plant.”

As I continued weeding, I thought about how rhubarb is one of the first to appear in early spring. It breaks through the snowy, ice-encrusted ground before the arrival of tender crocuses; before clamorous birdsong in the morning; before buds form on lilac, cherry and maple trees. How can anyone fail to admire such a passionate resolve?

When those first socketed sprouts appeared, I’d find Mom outdoors, scrutinizing them like a parent counting a newborn’s fingers and toes. She would estimate about how long it’d be until she could make her rhubarb pie.

But when I was a kid and she gave me that pie, it made me cry. In my teens, it made me wince. Even whipped cream or ice cream did not sweeten the deal for my young taste buds. Rhubarb was something to be avoided at all costs.

Then, last summer, as old cookbooks lay tented on my kitchen table, I searched for Mom’s cinnamon roll recipe. I found the one for her rhubarb pie. So I decided to give it a try. I rinsed, chopped, measured, stirred, baked, and sampled.

A few tries later, I served rhubarb pie a la mode to family and guests. All agreed, including me, that it tasted incredible. Ambrosia. Tart and spicy, complex, tangy, and sweet—the perfect harmony of flavors.

Since then I’ve come to two conclusions about rhubarb. First, you can take rhubarb out of the country, but you can’t take the country out of the rhubarb. And second, rhubarb’s taste may be lost on children, but adults can cherish it as a delicacy. Like my wise mother, I now understand that “Nothing beats a good bite that bites back.”