The 13 Most Common Election Scams and How to Spot Them

Intelligence agencies say there are more scams and other types of election interference than ever. Here's how to protect yourself and make sure your vote counts this year.

This year’s election feels particularly high-stakes and scammers, both foreign and homegrown, are already capitalizing on the fear and confusion, says Domonique James, a political strategist, former Obama Administration official, and founder of Politics With Purpose, a consulting and communication firm in Washington, D.C. “We’ve heard from our national intelligence community, through their report to Congress, that election interference is already happening at an unprecedented level,” she says. “This is unfortunate because our system only works if voters have faith in it and scams cause us to doubt the electoral process and its results.”

Fortunately, there are ways to outwit the scammers and make sure your vote and your information is safe and secure, she says. “Your vote this year is more important than ever so it’s important to be aware of some scams and know how to protect yourself.” Learn more about why not voting is not an option in the 2020 election.

Here’s how to identify common election scams and protect yourself.

It’s very common this time of year to receive texts, emails, or calls asking you to donate money to a political party or campaign. While some of these are the real deal, many are scams just looking to get your credit card or other financial information so they can steal your money, says Steven J.J. Weisman, Esq., lawyer, professor at Bentley University, in Waltham, Massachusetts, and author of The Truth About Avoiding Scams. Even if they look totally legitimate, phone numbers and emails are easily spoofed these days so you can never be sure where it’s really coming from. “If you are truly interested in contributing to the campaign of a candidate you should hang up and go online to the actual candidate’s website where you can make a donation directly,” he says.

Don’t click through links to campaign sites from social media as many are faked in order to steal money or personal information, Weisman says. Always navigate to the site yourself but be careful, when looking up a campaign or candidate, don’t automatically go with the first website on the list, he says. Not sure if the site is legit? “I use the website whois.com to find out who actually owns a website to make sure you are on the right website,” he says.

Hats, buttons, masks, shirts, signs, and bumper stickers are just a few of the ways through which you can proclaim your political opinions or affiliations—and every election season scammers make a fortune by selling fake “official” campaign merch, Hoelscher says. The merchant themselves may be fake, meaning you never get the product or your money back, or the product may exist but not be official. This matters because campaigns sell merchandise as a way to raise money so you may think you’re making a political donation when you’re really lining scammers’ pockets. Make sure you know this online shopping scam the FBI is warning people about.

Some campaigns soliciting donations send out mailers masquerading as “bills,” trying to trick you into paying them money, James says. “They can look very official, making you think you do actually owe them money,” she explains. “Make sure you read everything carefully, including the fine print, before you send anyone money or your financial details.” 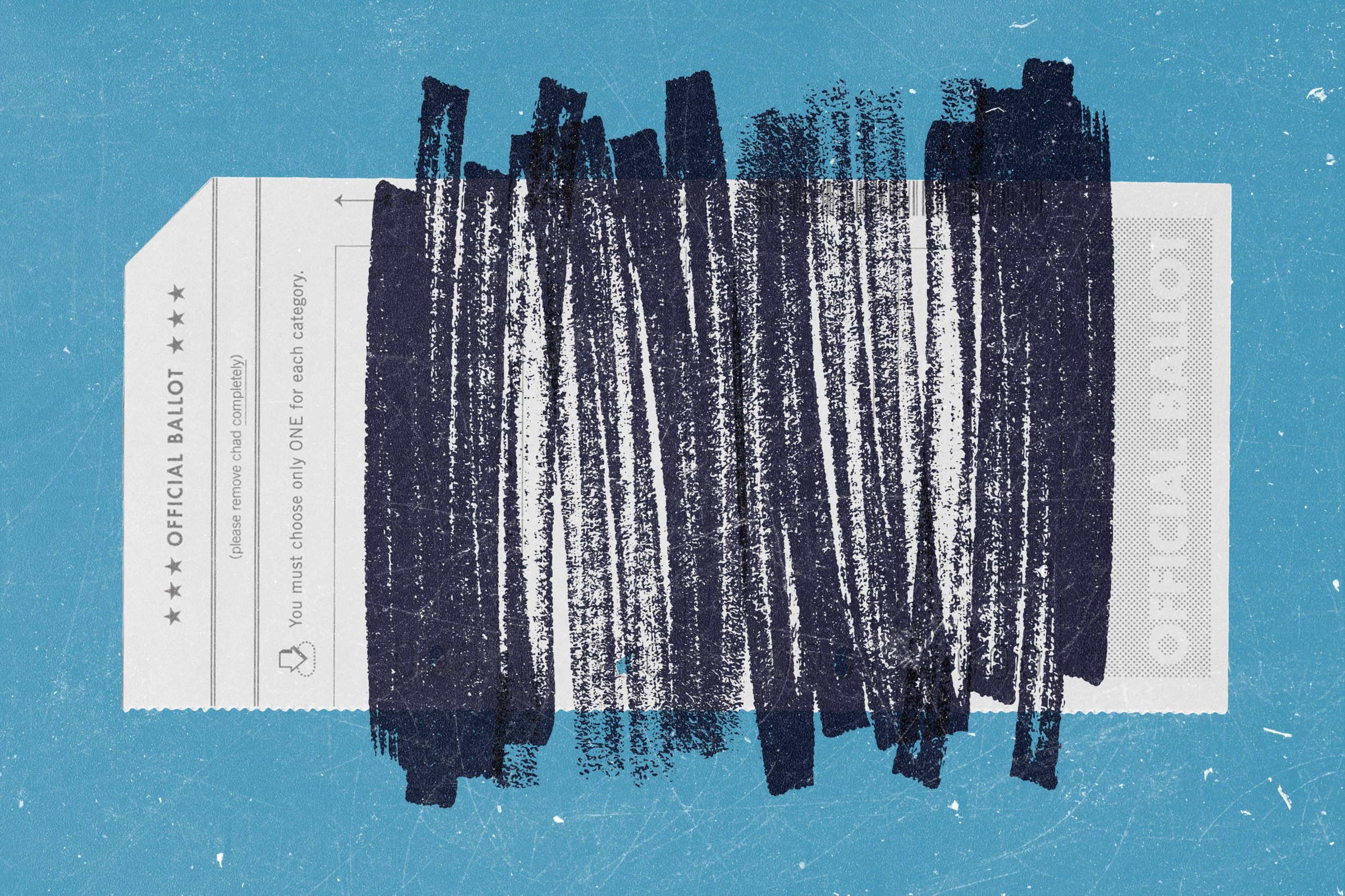 Polls are one of the primary ways people keep tabs on how the campaigns are progressing but unfortunately, there are some fraudulent pollsters who are more interested in getting personal information from you that they can use for purposes of identity theft, James says. “They may start the call asking innocent survey questions, but end the call asking for personal information. Know that you never need to provide your Social Security number, credit card number, bank accounts, or any other personal identifiable information to a legitimate pollster over the phone,” she explains. Make sure you know these 10 phone call scams.

Simply clicking on a link a text or an email is all it takes to potentially download dangerous software, called ransomware or malware, and thieves take full advantage of this during election season, Weisman says. These malicious software programs can harvest your information, force you to pay a ransom for your information, and/or steal your usernames and passwords. “Never click on links in emails or text messages that appear to come from candidates or PACs unless you have absolutely confirmed they are legitimate because the risk of them containing malware such as ransomware or keystroke-logging malware that can lead to your becoming a victim of identity theft is too great,” he says. This is one of the 10 common online scams everyone needs to know about.

Calls from the IRS or other government entity

Scammers love to pose as an IRS or other official government agencies because it immediately causes panic which can make you let your guard down, James says. They may call you saying that you need to confirm your social security number to vote or pay back taxes before being allowed to vote—any lie that makes you worry you’ve done something wrong, she says. “The IRS will never call you and if you are worried about someone impersonating a government entity, ask for their name and contact information, website, and the official name of the agency,” she says. “Then end the call and cross-reference the information yourself. Don’t feel pressured to commit to anything over the phone.” Also, the government will never ask you to pay fines or taxes on iTunes, Steam, Target, Visa, or other types of gift cards.

Scammers may call you pretending to be your local city clerk or election official, telling you that they need to validate your information over the phone to confirm that you are a registered voter. “Often they ask for your Social Security number or driver’s license number, in addition to your address and other information,” Weisman says. This information can be used to steal your identity or even your vote. “The truth is your local officials will never call you to confirm your status as a voter and they certainly won’t ask for your Social Security number over the phone,” he says, adding that if you’re unsure, call your local city offices yourself and ask or check your voter registration status online.

“This election season looks different than any other. Campaigns and causes are over-relying on social media and word of mouth, which makes it really hard to tell facts from fiction,” James says. Scammers capitalize on this confusion by spreading disinformation designed to change your vote, invalidate your vote, or make you feel like your vote doesn’t matter, she says. These can take many, many different forms but one recent example Hoelscher experienced was a candidate who scheduled an annoying early morning robocall pretending to be from his opponent. It’s not just politics, disinformation spreads like wildfire on social media, like these 17 Facebook scams you need to stop falling for.

You may receive an official-looking card in the mail or get an official-sounding phone call telling you that you aren’t registered to vote and offering to register you or collect your ballot, James says. Don’t be fooled by this. “I recommend that everyone confirm their voter registration is accurate. You can do this via your local Board of Elections site or equivalent voter registry. The major political parties and official political candidates also offer voter registration and verification resources,” she says. “Do not trust someone else to do this for you, make sure to register yourself and that you are the only person who handles your ballot.”

Scammers target people who are looking for an easy way to vote by putting up posts offering to let you vote by simply clicking a link. “Currently there is no way to vote online in the United States, you either need to vote in person at a polling station or with a paper ballot you return through the mail or put in a ballot drop-box,” James says. These scam posts may be trying to gather your personal information, show you ads, or trick you into thinking you’ve already voted so you don’t vote for real, she explains. How to spot a dating scam.

Thanks to COVID-19, many elections procedures have changed. Scammers take advantage of this confusion by putting out false information about where and when to vote, like telling people to vote the day after the election, James says. It may appear as an official-looking-but-fake banner ad on a social media site, an article on a blog, or even a flyer on your door. “It’s one more way of trying to suppress or invalidate your vote,” she says. Election day in the United States is always the first Tuesday in November but James recommends listening to your local leaders like the mayor, the Board of Elections, or political candidates for exactly when, where, and how to vote in your area. Here’s everything you need to know about how to vote in the 2020 election.

Saying you must vote twice to make sure it’s counted

At a rally in September of 2020, President Donald Trump recommended his supporters vote by mail and then attempt to vote again in person as a way to make sure their vote is counted. “Do not do this. Voting twice is illegal in every state and can disqualify your vote completely,” James says. Many states now let you register your ballot with an online tracker so you can see where your ballot is and ensure it is counted, she says. Some states will contact voters directly if there are issues with their ballot. “Whether you choose to vote in person or by mail, my recommendation is that you vote early,” she says “Anyone who tells you that mail-in ballots don’t count or aren’t reliable is scamming you.”

Why These 5 States Hold Odd-Year Elections